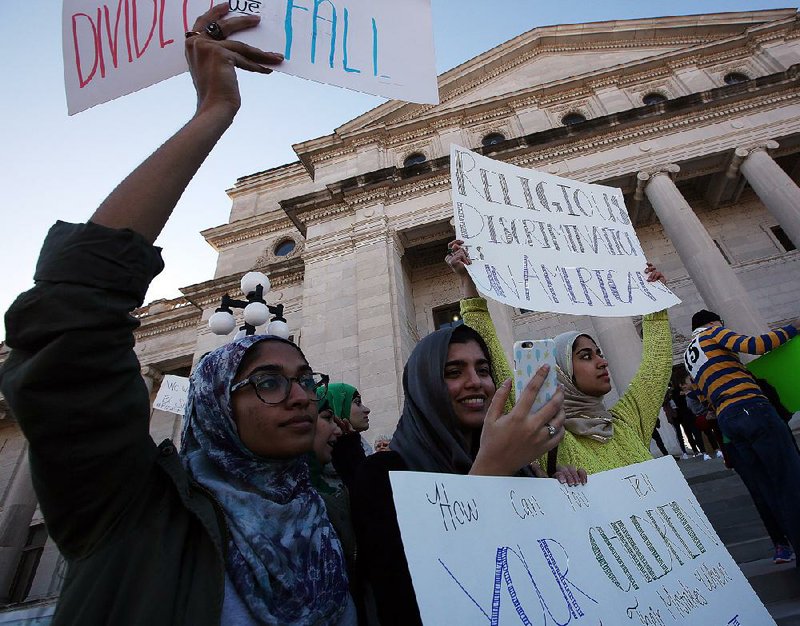 Anya Ali (from left), Arooba Ilyas and Roshaneh Ali, all of Little Rock, hold signs and listen to speakers during an immigration rally at the state Capitol on Sunday. ( Mitchell PE Masilun)

Mary Melekian Richardson rallied at the Arkansas Capitol on Sunday in support of immigrants and Muslims because of her roots.

"It saddens me," she said. "These executive orders are coming from a place of hate."

Richardson, of Little Rock, was joined by a diverse crowd of about 700 that stretched from near the top of the State Capitol stairs down to the front lawn.

The rally, which lasted about an hour, renounced Trump's directive on immigration, which halted the U.S.' admission of refugees for four months, barred the entry of citizens from seven predominately Muslim countries for three months and indefinitely banned Syrian refugees from entering the country.

The White House instructions led to chaos at several U.S. airports, where immigrants and refugees named in the order were arriving. Some were detained; others were reportedly deported.

At Sunday's rally, about 10 speakers addressed the crowd, including state legislators, an Iraqi refugee, a Syrian refugee and a former Arkansas Supreme Court justice.

Between each speaker, the crowd chanted, "This is what democracy looks like."

Rita Sklar, the executive director of the American Civil Liberties Union of Arkansas, encouraged any families affected by Trump's order in Arkansas to contact the ACLU.

The ACLU in New York challenged Trump's order, and a federal judge blocked portions of the directive, ruling that those being held at airports could not be deported.

"This is what democracy looks like," Sklar said. "But it also means contacting your congressmen and telling them this isn't what you want." 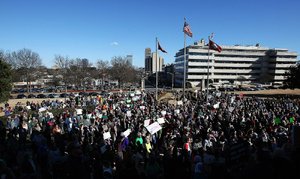 Photo by Mitchell PE Masilun
A crowd listens to speakers during a rally at the state Capitol on Sunday to protest President Donald Trump’s immigration order.

None of Arkansas' congressional delegation were among the handful of Republicans that criticized Trump's order over the weekend. U.S. Sen. Tom Cotton, a Republican from Dardanelle, said in a statement that it wasn't a "religious test," and he thought most Arkansans supported the "common-sense measures."

"I doubt many Arkansans or Americans more broadly object to taking a harder look at foreigners coming into our country from war-torn nations with known terror networks; I think they're wondering why we don't do that already," Cotton said.

A 21-year Army veteran at Sunday's rally held a sign and stood near a man in a taqiyah -- the cap worn by Muslim men -- and a woman in a hijab. Afterward, he decried Trump's order as "driven by fear."

"This is not what I served for," Lee Zimmerman said.