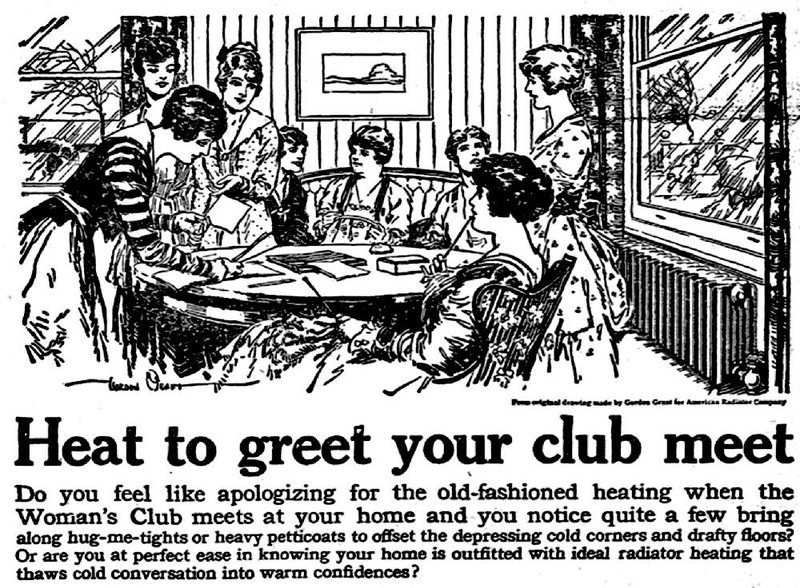 Winter’s chill can’t touch the cozy clubwomen in this illustration from an ad for the American Radiator Co. of St. Louis, which appeared in the Jan. 29, 1917, Arkansas Gazette.

It made Arkansas the first Southern state to endorse women's equal citizenship.

Note that voting in primaries is not all the voting that fully enfranchised Americans are allowed to do. But it was a big step. And how it came to pass is -- and was -- a bit surprising.

The campaign for equal suffrage was an uphill struggle in Arkansas lasting more than 50 years, if we start counting from its first thwarted effort. During the state's post-Civil War Constitutional Convention of 1868, one Miles L. Langley, delegate from Clark County, seriously proposed women's suffrage. He was roundly dismissed.

Historian Bernadette Cahill provides a good summary of the coalitions and tactics suffragists tried over the ensuing decades -- and concrete details about the places where they tried them -- in her 2015 paperback Arkansas Women and the Right to Vote: The Little Rock Campaigns, 1868-1920 (Butler Center Books, $24.95).

It's a great preparation for today's Old News, but if you don't have time to read the whole book today, know these three facts:

• The suffrage campaign had gained so much support (in the face of dismissive opposition) that in 1915 both branches of the General Assembly approved an Equal Franchise amendment to the state constitution that could have been submitted to the voters for approval. It was excluded under a technical rule allowing only three proposed amendments per ballot.

• Advocates for suffrage met often at the Marion Hotel and their names were often in newspapers. They were easy to find.

"The introduction of a suffrage amendment in the house yesterday by Representative John A. Riggs of Hot Springs, owner of the Daily New Era, was a surprise to members of the Arkansas Equal Suffrage Association, according to Mrs. O.F. Ellington, president of the association.

"'The State Democratic Central Committee was asked to and did endorse the principle of equal suffrage in the platform last fall, but was not asked to recommend a measure,' Mrs. Ellington said.

"'The state association decided it would be impossible to get the amendment through, and when our delegation went to the national convention, they did not report Arkansas as a campaign state. For this reason, we were not allotted campaign funds.

"'We certainly shall support the measure, and help Representative Riggs all we can. I shall see him immediately and discuss a plan of action.

"'I believe this is the first instance where a suffrage measure was introduced in any legislature without having been urged by some suffrage organization, and we have not asked any of the members of the present legislature to push an amendment.'"

"Mrs. Ellington said that because no action was expected, no canvass had been made of the house members, but this probably will be done at once. The first news of the introduction of the measure was given her by a Gazette reporter, she said."

It's tempting to interpret Riggs' failure to consult women's organized advocates as "typical man" stuff. Why bother consulting the little ladies, huh? But individual newspaper reports seldom convey a whole story. Suffragists had made a strong showing in the previous session. Although his name appears alone in several Gazette accounts, Riggs was not the lone ranger. The governor and other powerful lawmakers were on board.

"John A. Riggs, representative from Garland county, author of the proposed constitutional amendment for equal suffrage, has withdrawn his measure because of the fact that it is too late for its submission at the next general election. He will support Senator Smith's bill for a constitutional convention, in the hope that, if it is authorized, a suffrage plank will be inserted in the new constitution."

In a statement announcing his decision, Riggs noted that 12 other states had already granted suffrage to women.

Arkansas Women May Get Suffrage

"That the question of equal suffrage in Arkansas, at least for all practical purposes, was not ended when three proposed amendments to the constitution were filed before the suffrage amendment, thus shelving it for another two years, developed yesterday when it became known that a bill to permit women to vote in primary elections will be introduced in the house this week.

"Representative John A. Riggs of Hot Springs, an ardent suffragist and author of the joint resolution introduced early in the present session to submit a suffrage amendment, is preparing the bill. Since the constitution makes no provision regarding primary elections, Mr. Riggs believes there will be no legal barriers to the plan. If successful, the measure would practically [give] women the right to vote in Arkansas, as the choice of all state and most of the county, municipal and township officers is virtually decided in the Democratic primaries."

Did that approach succeed? We'll look for evidence in the newspaper archives again next week and also talk a bit about the interesting Mr. Riggs. For now, I leave you with this fun information:

As headlinese goes, Suffs is easy to understand. Prohibitionists were frequently nicknamed "Drys" or "Prohibs" or the more confusing "Prohis." Prohibition opponents were "Wets" or "Antis."