Some in GOP air concerns; overturn it, Democrats urge by COMPILED BY DEMOCRAT-GAZETTE STAFF WIRE REPORTS | January 30, 2017 at 4:30 a.m. 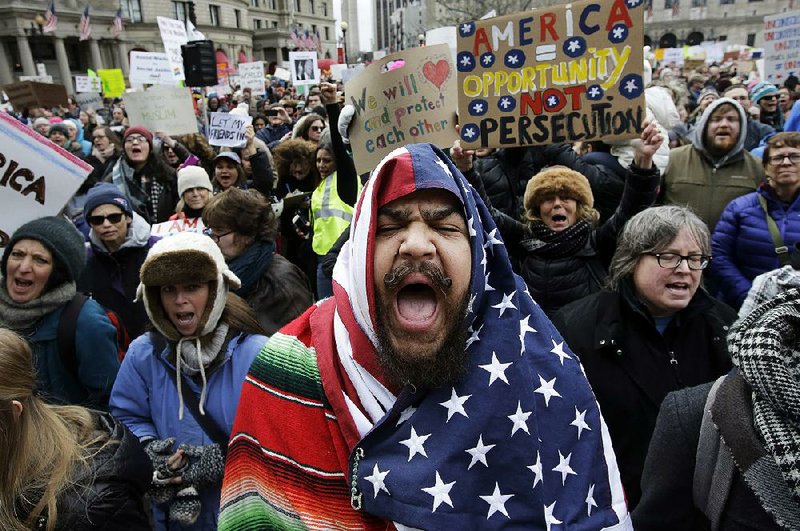 Izzy Berdan of Boston wears an American fl ag as he marches with other demonstrators during a rally Sunday in Boston against President Donald Trump’s order that restricts travel to the U.S. (AP / STEVEN SENNE )

WASHINGTON -- The White House on Sunday tried to tame concerns over a sweeping immigration order that led to widespread protests, as some Republicans in Congress urged President Donald Trump to proceed with caution in the face of legal pushback.

During interviews on Sunday news shows, Trump's aides stressed that only a small number of travelers had been affected by the executive order, which temporarily bars the citizens of seven majority Muslim nations from entering the country. The aides also said that citizens of those countries who hold permanent U.S. residency "green cards" will not be barred from re-entering the country.

"I can't imagine too many people out there watching this right now think it's unreasonable to ask a few more questions from someone traveling in and out of Libya and Yemen before being let loose in the United States," Trump's chief of staff, Reince Priebus, said on NBC's Meet the Press. "And that's all this is."

The comments came the morning after a federal judge in New York issued an emergency order temporarily barring the U.S. from deporting people from the seven nations subject to Trump's 90-day travel ban. The judge said travelers who had been detained had a strong argument that their legal rights had been violated.

The judge's order barred U.S. border agents from removing anyone who arrived in the U.S. with a valid visa from Iraq, Syria, Iran, Sudan, Libya, Somalia and Yemen. The ruling also protects anyone with an approved refugee application.

As of Sunday afternoon, one legal permanent resident had been denied entry to the U.S. as a result of Trump's order, according to a federal law enforcement official. The official was not permitted to discuss the order's effects publicly and spoke on the condition of anonymity.

The changes, said White House adviser Kellyanne Conway, are "a small price to pay" to keep the nation safe.

But Trump's executive order, which also calls for the suspension of all refugee admissions for 120 days and indefinitely bars the processing of refugees from Syria, does not address homegrown extremists already in the U.S., a primary concern of federal law enforcement officials. And the list of countries in Trump's order doesn't include Saudi Arabia, where most of the hijackers in the Sept. 11, 2001, attacks were from.

Senate Majority Leader Mitch McConnell, R-Ky., said he supports more stringent screening mechanisms, though he cautioned that Muslims are some of the country's "best sources in the war against radical Islamic terrorism."

Speaking on ABC's This Week, he also stressed the need "to be careful as we do this," and said it would be up to the courts to decide "whether or not this has gone too far."

Sens. John McCain, R-Ariz. and Lindsey Graham, R-S.C., meanwhile, warned of unintended consequences, expressing worry that the order could "become a self-inflicted wound in the fight against terrorism."

"This executive order sends a signal, intended or not, that America does not want Muslims coming into our country. That is why we fear this executive order may do more to help terrorist recruitment than improve our security," they said in a statement.

Trump called his order a necessary step to stop "radical Islamic terrorists" from coming to the U.S.

"The travel ban is the wrong approach and will likely be counterproductive," network co-Chairman Brian Hooks said in a statement. "We believe it is possible to keep Americans safe without excluding people who wish to come here to contribute and pursue a better life for their families."

"This executive order was mean-spirited and un-American," he said, flanked by refugees at a news conference in New York. "Look at these faces. Are they any kind of threat to America? No, they're the promise of America."

In an interview, Sen. Chris Murphy, D-Conn., said he would introduce legislation to overturn Trump's order by forcing him to comply with the 1965 Immigration and Nationality Act, which banned discrimination against immigrants on the basis of national origin.

"I think ultimately this ban will be struck down by the courts, but we need to put legislation on the table that Republicans could support, that overturns the ban," Murphy said. "[The president] clearly campaigned on this ban, but the fact that he put no thought into how it was drafted or how it would be implemented is incredibly dangerous."

At his news conference, Schumer said he believed that legislation could easily move through the Senate given the growing opposition from key Republicans, including McCain, Graham, Ben Sasse of Nebraska, and others.

Sen. Bernie Sanders, I-Vt., who has taken a leading role in Democratic messaging, said Sunday that the Senate needs "to pass legislation immediately which effectively rescinds Trump's un-American and unconstitutional ban on people from seven Muslim countries from entering the United States." He also called for the Senate to slow the process of confirming Trump's nominees for Cabinet posts.

"Almost without exception, Trump's Cabinet nominees are extremely controversial and way outside of the American mainstream," Sanders said. "In my view, the Senate needs to take as much time as possible on the floor for a full discussion and debate about each of these nominees."

Over the weekend, leaders around the world responded to Trump's executive order, either criticizing the move or expressing hope that it would inspire similar measures.

A spokesman said British Prime Minister Theresa May does "not agree" with Trump's order and will challenge the U.S. government if the executive action has an adverse effect on British nationals. The official comment came after May refused to condemn the ban Saturday during a visit to Turkey. She said in Turkey that the decision was a matter solely for the U.S.

"She is convinced that even the necessary, resolute fight against terrorism doesn't justify putting people of a particular origin or particular faith under general suspicion," Merkel spokesman Steffen Seibert said.

Jihadi groups celebrated the ban, saying the new policy validates their claim that the United States is at war with Islam.

Comments posted on pro-Islamic State social media accounts predicted that the order would persuade American Muslims to side with the extremists. One post hailed the U.S. president as "the best caller to Islam," while others predicted that Trump would soon launch a new war in the Middle East.

McCain said Sunday that he worried about the ban's effect on Muslim troops who fight alongside Americans against the Islamic State in Iraq and Syria.

"The effect will probably in some areas give ISIS some more propaganda," McCain said on CBS' Face the Nation, using an acronym for the Islamic State.

Robert Richer, a 35-year CIA veteran and former chief of the agency's Near East division, said the ban was a "strategic mistake" that could undermine future efforts to recruit spies and collect vital information about terrorists and their plans. He questioned how CIA officers can persuade Iraqi and Syrian nationals to risk their lives to help the United States.

Geert Wilders, a Dutch populist leader, said in a tweet: "Well done POTUS it's the only way to stay safe + free. I would do the same. Hope you'll add more Islamic countries like Saudi Arabia soon."

"For the first time ever one can say from a nationalist perspective: keep going, USA," the National Democratic Party in Germany wrote on its official Facebook page.

In Italy, the leader of the anti-immigration Northern League party also expressed admiration.

"What Trump's doing on the other side of the ocean, I'd like it done also here," Matteo Salvini told reporters on the sidelines of a conference.

"Let's be careful," Minniti said in a speech Sunday to officials from the main government coalition party, the Democrats. "Dissatisfaction and marginalization becomes the culture terrain of terrorism."

Information for this article was contributed by Jill Colvin, Alicia Caldwell, Steve Peoples, Frank Jordans, Lynne O'Donnell and Frances D'Emilio of The Associated Press; and by David Weigel, Ed O'Keefe and Joby Warrick of The Washington Post.