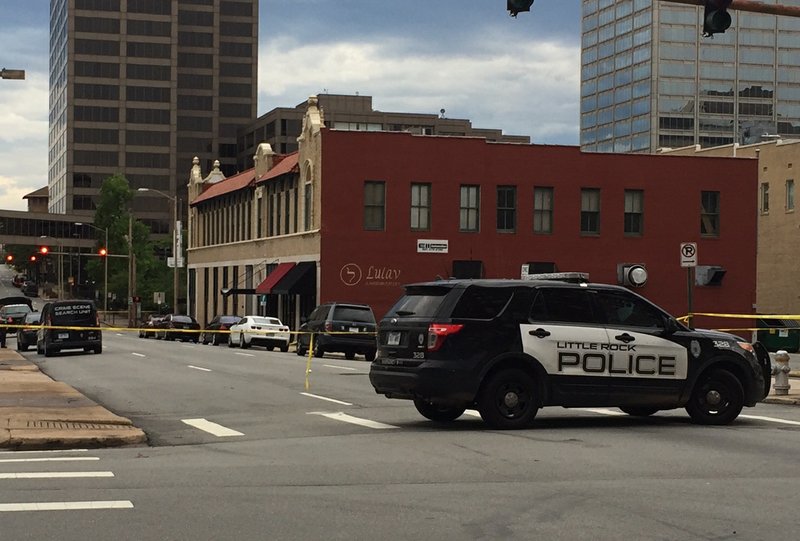 25 people were shot and three others injured after gunfire was exchanged early Saturday at a nightclub in downtown Little Rock. ( Brandon Riddle)

Two people remain in critical condition after a mass shooting at a Little Rock nightclub early Saturday, authorities said during a news conference at city hall that afternoon.

Twenty-five people were hit by gunfire when shots rang out during a rap show around 2:30 a.m. at Power Ultra Lounge at 220 W. 6th St. Three more people suffered other injuries.

Little Rock Mayor Mark Stodola characterized the shooting as a "disagreement amongst a small subset of individuals" who were armed and said he was thankful no one was killed.

"By the grace of god, all of the victims are expected to survive," he said, adding the city needs to do more to "keep guns out of the hands of the wrong people."

Little Rock Police Chief Kenton Buckner said he had no information to release on suspects and that the general public is not believed to be at risk. The violence may be tied to recent shootings in Little Rock, where about a dozen drive-by cases have been reported in recent days.

"We certainly feel like there's a possibility there may be a connection," Buckner said.

Buckner noted that police were on duty outside the club patrolling the parking lot from 11 p.m. to 2 a.m. and at one point stopped a person who was "openly carrying a weapon." He said that person may have gotten in a different entrance. Buckner said 20 to 30 officers responded to the club, setting up a large crime scene that remained in place Saturday afternoon.

The club's website listed information about a performance by an artist named Finese 2 Tymes that was scheduled for Friday night. He later posted a statement on Facebook offering prayers for the victims and condemning the violence.

Buckner identified Finese 2 Tymes as Ricky Hampton and said he is wanted on at least one outstanding warrant in an unrelated case in Forrest City.

Stodola criticized the event, which he said was promoted with an image featuring a gun. He noted the alcohol permit had already been revoked for the establishment and that it would not reopen.

"We will be shutting this location down. Absolutely," he said. "This activity downtown is going to cease."

The Little Rock Police Department, which had initially said at least 17 people were shot at the Power Ultra Lounge at 220 W. 6th St., reported shortly after 10:30 a.m. that the number of victims with gunshot wounds was 25. The agency said all of the victims are expected to survive.

Gov. Asa Hutchinson, meanwhile, issued a statement in which he offered prayers for the victims, thanked first responders and said Little Rock's "crime problem appears to be intensifying."

"Every few days it seems a high profile shooting dominates the news, culminating with this morning's event," he said. "I have spoken this morning with Mayor [Mark] Stodola and I have offered both my heart felt concern over this senseless violent tragedy and state assets as needed to address the continued threat of violence in our community.

“We are still gathering facts, but it is clear that we need to have a comprehensive enforcement strategy in place that helps take the violent threats off the streets. The state will participate and bring assets to the table to support local law enforcement efforts."

Officers responded around 2:30 a.m. to the disturbance at the club, which is on 6th Street between Center and Louisiana streets.

The University of Arkansas for Medical Sciences, Little Rock had 11 patients, most of whom were treated and released, said Leslie Taylor, vice chancellor for the Office of Communications and Marketing. All had non-life-threatening injuries, she said. Three were taken to CHI St. Vincent, where one victim was in critical condition, said Aaron Sadler, a media relations specialist for Ghidotti Communications, one of the hospital’s clients.

One couple, who asked not to be identified for fear of retaliation, said their nephew — “an innocent bystander” — was shot in the arm at the club. He will recover, they said, and was resting at UAMS early Saturday. The couple added his family is praying for all the victims.

Chief Kenton Buckner said Memphis rapper Finese 2Tymes was on stage when the dispute broke out and shots were exchanged.

The injured victims who were not shot were said to have been hurt “either [by] being trampled or trying to exit the location." The youngest victim was reported to be 16.

Officials emphasized that the shooting was not believed to be terror-related.

In a Facebook video under an account of Darryl Rankin, about 10 shots ring out inside the club followed by another round of multiple shots. The shooter is not shown in the video.

Rankin told The Associated Press that he was recording the show on Facebook Live when gunfire erupted and that one of his friends is now at a hospital with a bullet "stuck in his spine."

Courtney Swanigan said she was near the front of the club with her sister when gunfire erupted about an hour into the show. They were not injured. She didn't know what led to the shooting, but she said she saw someone onstage with a handgun amid the melee.

"I just closed my eyes, got down on the ground and put my hands on my head," Swanigan said.

The police chief said it’s too early to know if there are multiple suspects, but based on the number of people hurt, it’s likely more than one person was involved, he said.

No information regarding the shooter was immediately available.

Stodola, the Little Rock mayor, posted a statement on the shooting on Facebook shortly before 9 a.m.

"My heart is broken this morning — my prayers are with the victims of this tragedy," he said. "Thanks to the first responders and our hospitals. We are still gathering information and will have a press conference this afternoon. We are committed to doing everything possible to bring safety to our city. We need everyone to help."

The shooting follows a week in which there have been about a dozen drive-by shootings in the capital city, though there's no indication the events are linked.

Early Saturday, Rada Bunch waited outside the club after she had heard from a friend that her son had been at the club and may have been shot. She had received little information about the incident

"I'm sick of all the killing and I'm tired of all the shooting, the kids getting hurt," Bunch said.

It was quiet along the block later Saturday morning. Curious neighbors peeked out of windows, and morning walkers and joggers stopped to look at the broken windows and debris scattered in front of the lounge.

Several neighbors who live in apartments across the street were saddened by the news but not surprised. They said that they regularly call police due to commotion coming from the club. Each weekend, they said, loud music and fights break out in the parking lot.

“This was bound to happen,” one neighbor said. “It was only a matter of time.”

He and others declined to give their names, fearing retribution from club ownership or the shooters.

The club's Facebook page promoted Friday night's show with a poster depicting a man pointing what appears to be a gun at the camera.

The Alcohol Beverage Commission issued an emergency suspension of the club's permit Saturday, citing potential violations of failure to be a good neighbor, allowing possession of weapons on the premises and disorderly conduct. The permit will remain suspended at least until July 10, when a hearing is scheduled.

In a statement on Facebook, Finese 2Tymes offered prayers for the victims.

"The violence is not for the club people," he wrote. "We all come with 1 motive at the end of the day, and [that's] to have fun, not to be hurt."

In May, one person was killed and six people were hurt in a mass shooting at a downtown concert in Jonesboro, Arkansas, about 115 miles northeast of Little Rock. In that case, two men were charged with first-degree murder and six counts of first-degree battery.

Information for this article was contributed by Scott Carroll, Aziza Musa and Hunter Field of the Arkansas Democrat-Gazette, Emma Pettit and Gavin Lesnick of Arkansas Online and The Associated Press.