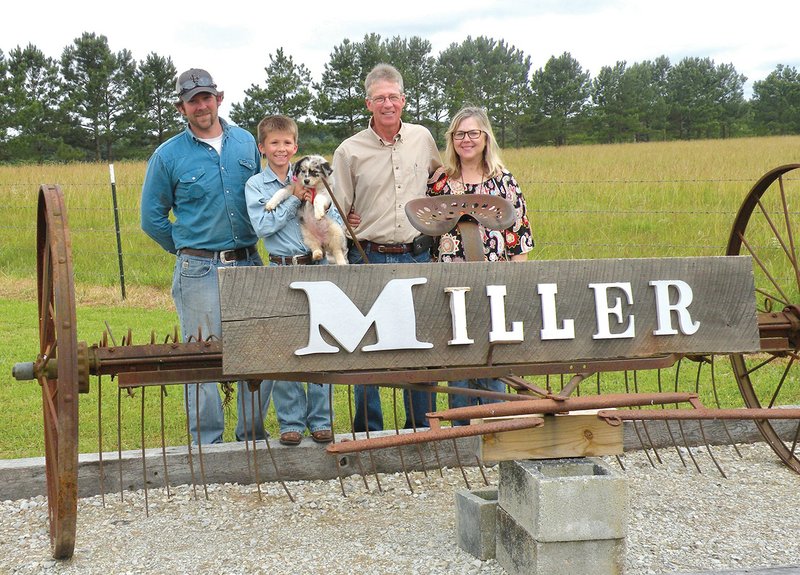 The Doug Miller family of Zion is the 2017 Izard County Farm Family of the Year. Family members standing behind an antique hay rake that belonged to Doug’s grandfather are, from left, Dan Miller and his son, Ty, with the family dog, Molly, and Doug and Tammy Miller. Several family members were not available for this photo. ( Carol Rolf )

Several generations of Millers have farmed land in and around the small communities of Sage and Zion in Izard County. William Douglas “Doug” Miller and his family are the current landowners and pay tribute to those who came before them — there are remnants of the past everywhere on their farm.

Miller, who enjoys woodworking as a hobby, and his wife, Tammy, who enjoys finding and repurposing old things, have built a home filled with antiques and repurposed items. Moreover, the home they recently built is partly constructed with old lumber from houses and barns from earlier generations.

The Millers have been named the 2017 Izard County Farm Family of the Year. They raise beef cattle on their 740-acre farm, located in three places, near Zion, just outside Sage. They have a 160-head cow/calf operation, some purebred Angus and some crossbred cattle.

“I am excited about being named Farm Family of the Year,” Doug said.

“I started farming with my dad and grandfather,” Doug said. “They would have been so thrilled to see us get this honor.”

The Millers have two adult children — Daniel “Dan” Miller, 30, and Holly Harris, 28. Both live on the family farm with their own families.

Dan Miller and his wife, Brooke, have two sons, 11-year-old Ty, and 6-month-old Orrin. Dan works for the Arkansas Highway Department in Melbourne, and Brooke is in medical school at the New York Institute of Technology College of Osteopathic Medicine at Arkansas State University in Jonesboro.

Holly Harris and her husband, Lee, have two children — 4 ½-year-old son, Emmitt, and 5-week-old daughter, Raylyn. Holly is a physical therapist at Kids First in Mountain View, and Lee sells farm equipment and does custom haying.

“We tore down houses and barns belonging to two sets of grandparents and used the wood to help build our house,” Doug said. “I also used some of the wood to make tables and other pieces of furniture. The walls in my office are made of some of the old wood.”

Doug, 59, worked off the farm for many years.

“I’ve lived here all my life,” he said, adding that he graduated from Melbourne High School. “I’d get up before daylight and check and feed the cattle; then I’d go to school. I’d do the same thing at night after I got home from school. That took a lot of hours.”

Tammy, 58, grew up in Mount Pleasant and graduated from high school there. She attended Arkansas College at Batesville (now Lyon College). She has a degree in early- childhood education and taught kindergarten for 31 years.

Tammy is a daughter of Ray and Jean Vanatta of Mount Pleasant.

“I grew up on a cattle ranch that was started by my grandfather,” Doug said.

“A love for the land and animals was instilled in me very early. I never had a desire to live anywhere else but on a farm. Economic conditions made it necessary that I had to have an outside job for many years, but I finally realized my dream of being a full-time rancher,” he said.

“I am thankful that God has allowed me to do this. My son helps me when he can, and I hope that he will be able to pass this love of ranching down to his children,” Doug said.

Doug said that when he was 19, he was diagnosed with Type I diabetes and takes insulin injections daily.

“I was determined not to let my disease stop me from ranching,” he said.

“When I started, we had a large amount of woods that had to be cleared, so I purchased a dozer and went to work. After many long days, I now have over 700 cleared acres in grass production,” Doug said.

“Enough water potential for grazing was a problem that we have solved by building ponds and instilling water tanks. Current problems include rebuilding a hay barn that was destroyed by storms,” he said.

“I am currently adding two more working corrals and holding pens [for cattle],” Doug said. “I have another 40 acres that are in the plans to be cleared and put into grass production. A fencing plan will be developed for this land after it is cleared. The number of ponds required will also be decided.

“When our goal of 250 cows is reached, we will look for other ways to increase production.”

He said his goal is “to be able to run 250 cows on my current land with as much year-round grazing as possible.”