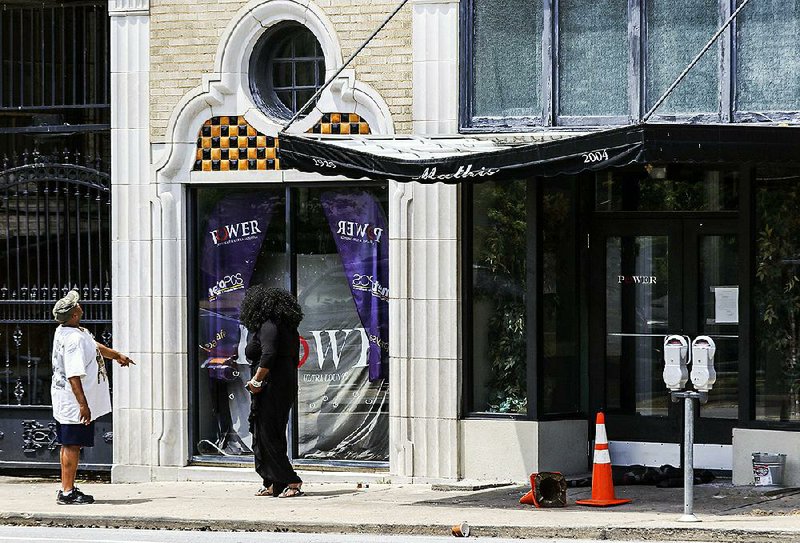 People take a look at the aftermath of the mass shooting at Power Ultra Lounge in downtown Little Rock on Sunday, July 2.

Four days after a shooting in a downtown Little Rock nightclub left 28 people injured, five of the victims remained hospitalized Tuesday, and police had yet to make any arrests in the case.

Of the five still hospitalized, one was listed in critical condition Tuesday, police said.

All five are expected to survive, Little Rock police said on Twitter.

As of Tuesday evening, police were without suspects in the shooting that occurred early Saturday at the Power Ultra Lounge, at 220 W. Sixth St., Chief Kenton Buckner said. Investigators believe that multiple gunmen opened fire in the crowd, he said.

About 2:30 a.m. Saturday, gunfire broke out during a rap music performance by Ricky Hampton, who performs under the name Finese 2Tymes. Police said rival groups opened fire in the packed club, wounding 25 people, and three other people were injured as they tried to flee the gunfire.

The shooting comes at a time when violent crime in the capital city is up from the previous year but still well below the numbers in the 1990s, the height of gang violence, data show. Early data show there have been nearly 1,400 cases of violent crime -- homicide, robbery, rape and aggravated assault -- in Little Rock since Jan. 1, a 24 percent increase over 2016.

Buckner described the Power Ultra Lounge shooting as an "anomaly" -- a "special storm created through a number of different reasons that exploded."

Police have said Hampton is a "person of interest" in the shooting but not a suspect.

Little Rock police have interviewed Hampton, who is jailed without bail in Birmingham, Ala. He was arrested Sunday on warrants issued by Arkansas authorities in an unrelated shooting in Forrest City.

In that case, Hampton got into a dispute with a woman as he was leaving Club Envy in the early hours of June 25, according to a federal criminal complaint filed Monday. He pointed a r̶i̶f̶l̶e pistol* at the woman and fired one shot into her vehicle as she was driving away, the complaint states. The bullet struck her in the neck, authorities said.

Hampton, 25, is facing a federal criminal complaint of felon in possession of a firearm in that case. He is also facing state charges of the same nature.

Buckner said Hampton's arrest is a sign of "progress" in the nightclub shooting investigation and of the department's "strong, pre-existing relationships with federal partners."

In 2015, the Little Rock Police Department joined the Violence Reduction Network, a U.S. Department of Justice program that directs federal resources to communities that have higher levels of violent crime. That program now falls under the National Public Safety Partnership, which was created last month under the administration of President Donald Trump.

"We have been working on these issues even before what happened in the club, and we will continue to work on them," Buckner said. "It just takes time for it to come to fruition."

In November, the department announced the establishment of the Violence Reduction Task Force and touted its success in its early months of operation -- without offering specific crime figures.

Other prevention measures were taken after Saturday's shooting.

Within hours of the gunfire, a notice to vacate was posted at the nightclub's entrance, ordering that the keys be returned to the landlord within three days.

Bruce Moore, Little Rock's city manager, said the club will be closed down through a criminal-abatement program, which involves a six-month process and gives a team of city departmental staff members the authority to secure targeted properties and prosecute people associated with them.

Buckner said the Police Department and city officials will work together to identify gaps in how establishments are licensed compared with how they are actually being operated. Power Ultra Lounge, for instance, was licensed as a restaurant, not as a club or performance venue.

*CORRECTION: The Century Arms, model RAS-47, 7.62-caliber weapon that authorities reported was found in the car of rapper Ricky Hampton and that police believe was used in a Forrest City shooting in June, is a pistol. It was one of three pistols found in the car when Hampton was arrested in Alabama earlier this month, according to the Bureau of Alcohol, Tobacco, Firearms and Explosives. The weapon was incorrectly described in an earlier version of this story.