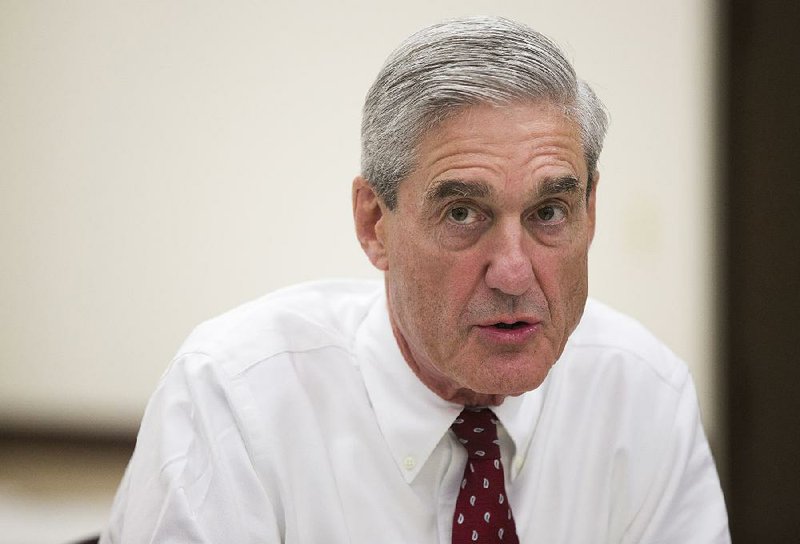 In an Aug. 21, 2013 file photo, outgoing FBI director Robert Mueller speaks during an interview at FBI headquarters, in Washington.

WASHINGTON -- Robert Mueller was greeted with near universal praise when he was appointed to lead the investigation into possible coordination between Donald Trump's campaign and Russia in the 2016 election, but as he builds his team, his every hire is under scrutiny.

At least seven of the 15 lawyers Mueller has brought on to the special counsel team have donated to Democratic political candidates, five of them to Hillary Clinton -- a fact that the president and his allies have been quick to highlight. Critics also point to some of the lawyers' history working with clients connected to the Clintons and to Mueller's long history with former FBI Director James Comey as they question whether those assigned to the investigation can be impartial.

Many lawyers and ethics experts say they see no significant legal or ethical concerns with the team's political giving or past work. But others say the optical problem is a real one that threatens to undermine public confidence in the investigation.

"In my view, prosecutors who make political contributions are identifying fairly strongly with a political party," said William Barr, who served as attorney general under former President George H.W. Bush. "I would have liked to see him have more balance on this group."

Criticizing those conducting an investigation is not a new tactic: Democrats famously put independent counsel Ken Starr in the cross hairs during his examination of President Bill Clinton. And by raising questions about the investigators early, legal analysts said, Trump is laying the groundwork to question any results that are not to his liking.

"By staking out the position of partisanship through campaign contributions, the president simply is setting a stage for a public relations assault down the road," said Jacob Frenkel, a defense lawyer who previously worked in the now-defunct Office of the Independent Counsel.

Trump has called the special counsel's investigation the "single greatest witch hunt in American political history," adding that it was "led by some very bad and conflicted people!" In a recent interview on Fox News, the president said that Mueller was "very, very good friends with Comey, which is very bothersome," and that "the people that have been hired are all Hillary Clinton supporters, some of them worked for Hillary Clinton."

Trump supporters have raised similar concerns. Newt Gingrich, the former Republican House speaker, wrote on Twitter that Republicans were "delusional if they think the special counsel is going to be fair."

But Attorney General Jeff Sessions, a Trump backer who has recused himself from the Russia investigation, was more circumspect in an interview with Fox & Friends on Friday.

"Mr. Mueller is entitled lawfully, I guess at this point, to hire who he desires, but I think he should look for people who have strength and credibility by all people," Sessions said.

Mueller has brought in 15 attorneys to work with him -- among them former colleagues at the WilmerHale firm as well as veteran Justice Department lawyers, said Peter Carr, a spokesman for the special counsel's office. Only 13 have been publicly identified.

The donations from the seven special counsel team members totals nearly $53,000. The other six who are publicly known to be on the team did not give any political contributions, records show.

Ethics experts said the giving should not preclude anyone's participation. Justice Department policies and federal law prohibit discriminating based on political affiliation when it comes to hiring for nonpolitical positions -- meaning Mueller might feel he cannot consider donation history when he makes hires.

"Bottom line is, I don't see how donations are relevant," said Richard Painter, who was the ethics lawyer for former President George W. Bush. "I've never heard of a single case where a prosecutor has been removed because of a political donation."

James Quarles, who worked as an assistant special prosecutor on the Watergate Special Prosecution Force, provided the most substantial donations of anyone on the team. Over two decades, he gave more than $30,000 to various Democratic campaigns, including $2,700 to Clinton's in 2016. But Quarles has also given to Republicans, contributing $2,500 in 2015 to Rep. Jason Chaffetz, R-Utah, chairman of the House Oversight Committee, and $250 to then-Sen. George Allen, R-Va., in 2005.

Andrew Goldstein, who headed the public corruption unit in the U.S. attorney's office in the Southern District of New York, donated $3,300 to Obama's campaigns. Three others -- Brandon Van Grack, a Justice Department national security division prosecutor; Rush Atkinson, a trial attorney in the fraud section; and Elizabeth Prelogar, a lawyer in the solicitor general's office -- donated less than $1,000 between them.

"There's a bipartisan consensus that the various, wild conflicts allegations that have been made by Trump and his allies are groundless," said Norm Eisen, a fellow at the Brookings Institution who served as Obama's ethics chief. "It just is not the case that lawyers or investigators are disqualified by political activity of this kind."

Information for this article was contributed by Sari Horwitz of The Washington Post.