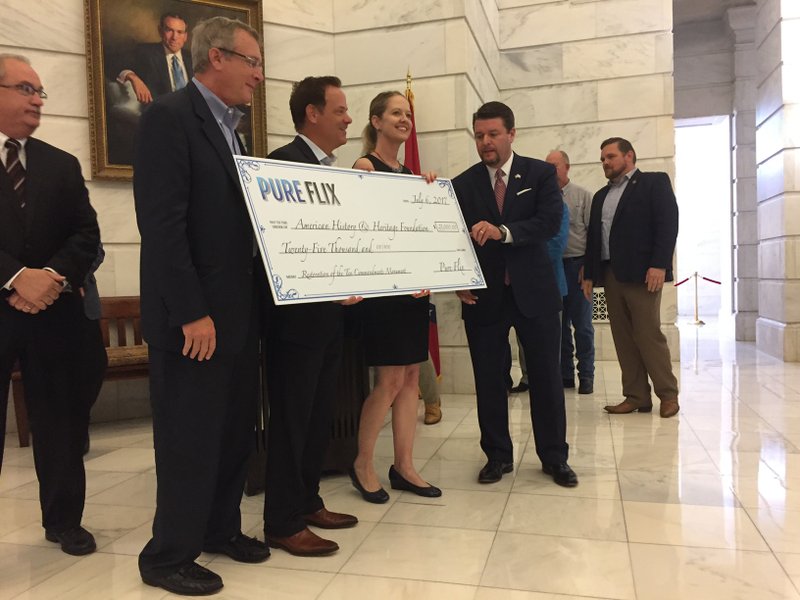 Executive producers of the Christian God's Not Dead movie series donated $25,000 Thursday to replace a Ten Commandments monument after the original was smashed less than a day after its installation on state Capitol grounds.

The 6-foot-tall stone inscribed with the 10 biblical laws was erected near the Arkansas Supreme Court building on June 27. Early the next day, according to police reports, Michael Tate Reed of Van Buren drove a Dodge Dart into the monument, which toppled, shattering the granite. He was arrested at the scene and faces misdemeanor charges of defacing an object of public respect and criminal trespass, and first-degree criminal mischief, a felony. Tate is being held in lieu of $100,000 bond.

The original God's Not Dead follows a college student who argues about the existence of God with an unbelieving professor. The follow-up, God's Not Dead 2, was filmed in Little Rock in 2015, the same year state Sen. Jason Rapert, R-Bigelow, sponsored a bill to get the Ten Commandments tribute installed. The two movies grossed more than $80 million combined, according to Box Office Mojo, a website that tracks movie revenue.

God's Not Dead 3 will be filming in Little Rock in the fall, Rapert said.

At Thursday's news conference, representatives from PureFlix Entertainment and GND Media Group joined Rapert at the Capitol rotunda to present him with a $25,000 donation.

Bob Katz and Troy Duhon, executive producers for the series, contacted Gov. Asa Hutchinson after the monument's destruction and offered the money, according to a news release.

Duhon spoke briefly at Thursday's news conference and said his son asked him the previous night why it was important to rebuild the tribute.

"Tell me what America would look like if Americans honored the Ten Commandments," Duhon told him.

Rapert told reporters at a news conference June 28 that he had no intent to use taxpayer dollars for the new stone. The original was paid for by $26,000 in private funds raised by the American History & Heritage Foundation, which Rapert created.

Including the $25,000 gift, roughly $55,000 in total has been raised in private donations since the monument was destroyed, the senator said Thursday. People have sent in money online through a fundraising website and given by mail and in person, he said.

After thanking donors and several Arkansas lawmakers, Rapert told the audience the new monument would likely be outfitted with "aesthetically pleasing" security of some kind. That someone would drive to Little Rock and ram the monument was something "nobody could have foreseen," he said.

The American History & Heritage Foundation is "ready for any cost that is needed" to support the monument, Rapert said. Any excess money will be funneled to other foundation-approved projects, he said.

Arkansas' stone will be ready for installation in about two months, Rapert said. The new and old monuments will be the same "right down to the granite that was used," he said.

Rapert's legislative push for a Ten Commandments monument triggered a debate on the appropriateness of religious symbols on government property. Several secular groups, including the American Civil Liberties Union and the Satanic Temple, have promised lawsuits if a monument is erected.