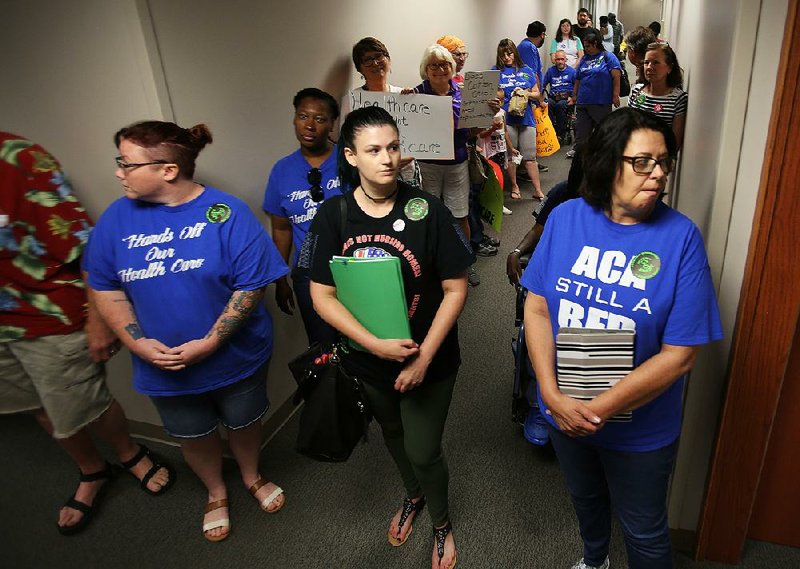 Protesters gather Thursday in the hallway outside Sen. Tom Cotton’s Little Rock office near the state Capitol for a sit-in urging Cotton to oppose the U.S. Senate’s proposed Republican health care plan. Similar demonstrations were held in Jonesboro and Springdale as part of a nationwide effort among a coalition of activists.

In Little Rock, about 60 people, including several wheelchair users, took turns holding signs, singing, chanting and telling personal stories in the lobbies of the two senators' offices in the Victory Building, near the state Capitol. More than two dozen others held signs on the sidewalk outside.

"We talk about terrorism -- I feel terrorized now," Lewis Sheppard, 62, of North Little Rock said inside the lobby of Cotton's Little Rock office.

He said he relies on Medicaid to pay for his doctor visits and prescriptions for high blood pressure, diabetes and cholesterol, and worries about the cuts to Medicaid that are in the Senate bill.

"I'm afraid that I may not live longer if I don't get the proper care and the medicine that I need," said Sheppard, whose legs were amputated during an operation to treat an aneurysm in 2013.

Outside Cotton's office in Springdale, about 20 protesters held signs, including a few who waved American flags from their wheelchairs and others who waved at the occasional honking motorist.

In Jonesboro, about 10 people held signs and waved at motorists outside the Union Street building where Cotton and Boozman lease offices.

"This bill impacts every Arkansan," said Ethan Williams of Corning, who organized the protest. "We can't just sit at home and let it happen."

The group stood under a large ornate clock by the Jonesboro building that chimed loudly every 15 minutes. At noon, the clock bonged 12 times and then played a deafening version of the national anthem.

Motorists drove past the building, stopping at an intersection and reading the various signs. A Jonesboro police officer waved to the crowd.

The demonstrations were among several held in Arkansas and across the country in recent weeks targeting proposals in Congress to overhaul much of the 2010 Patient Protection and Affordable Care Act.

Our Revolution, a group founded by members of U.S. Sen. Bernie Sanders' failed campaign for the Democratic nomination in last year's presidential election, said in a Facebook post that sit-ins in Arkansas and elsewhere were inspired by a June 22 protest. That demonstration by disabled activists at Senate Majority Leader Mitch McConnell's office in Washington, D.C., resulted in 43 arrests.

Among the groups participating in the Arkansas protests were the disability rights group Arkansas ADAPT, Planned Parenthood Great Plains, Arkansas Community Organizations and local chapters of Indivisible, which was formed to oppose President Donald Trump's agenda.

The Senate bill would phase out enhanced funding for states, such as Arkansas, that expanded their Medicaid programs and impose caps on spending for other Medicaid recipients, including children from low-income families and poor people who are elderly and disabled.

It would also scale back tax-credit subsidies that help those who don't qualify for Medicaid buy health insurance, and it would cut taxes -- imposed under the 2010 law to help pay for the benefits -- on insurers, drug companies and high-income households.

The nonpartisan Congressional Budget Office estimated that the Senate bill would increase the number of Americans without health insurance by 22 million people by 2026 while decreasing the number of people covered by Medicaid by 15 million.

At the Little Rock protest, LeDante Walker, 40, who lost the use of his legs and arms when he was injured in a car accident in 1997, said Medicaid pays for an attendant who helps him with tasks such as getting dressed, bathing and preparing meals every day.

Cuts to Medicaid would affect not only him, but other disabled individuals he helps as a part-time staff member with Spa Area Independent Living Services in Hot Springs, Walker said.

"Their biggest fear is losing the services that they have," he said.

Although Cotton was one of 13 senators assigned to write the health care bill, his spokesman has said he merely provided input to McConnell and didn't see the finished bill until the day it was released to the public last month.

On Thursday, Cotton was in Mexico "on business related to his role on the Senate Intelligence Committee," spokesman Dylan Haney said in an email.

According to a report by Fronteras Desk -- which describes itself as a news service supported by public radio stations in the southwest United States -- Cotton, CIA Director Mike Pompeo and Homeland Security Secretary John Kelly met with Mexican President Enrique Pena Nieto on Wednesday to discuss "organized crime, regional security and economic cooperation."

Boozman met with "local leaders" in Fordyce on Thursday and visited a service in Arkadelphia that provides free meals to children during the summer, spokesman Patrick Creamer said in an email.

In a statement on his website, Boozman said McConnell's decision to delay a vote on the Senate bill until after Congress' Fourth of July recess "shows that Senate leadership understands there are a number of concerns within the caucus about the original working draft."

"We are discussing possible amendments that will improve the existing framework as we continue to work toward improving healthcare for all Americans," Boozman said in the statement.

He said he has been consulting with Gov. Asa Hutchinson and getting "important feedback from Arkansans about how this proposal affects families in our state."

Hutchinson said last week that the bill should be revised to preserve more federal support for Medicaid and other subsidies to help low-income people buy insurance coverage.

Creamer said in the email that the "plan continues to be revised" and that he didn't have an update on Boozman's "position on the ongoing discussions."