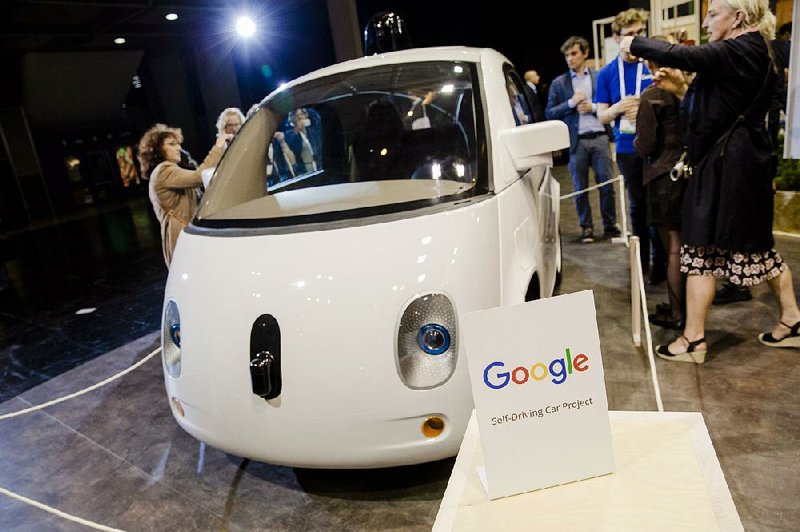 A Google self-driving car drew attention last year at a technology conference in Paris. The development of graphics processors has led to the more powerful computers needed to automate cars.

Self-driving cars are getting smarter all the time. Advances in software and artificial intelligence mean the machines are now able to distinguish between cars and cyclists, or between pedestrians and a pet. Many can now "see," picking out objects and obstacles approaching ahead. All that tech could eventually save lives, helping to prevent the 95 percent of car accidents that safety regulators estimate are caused by human error each year.

But none of this would be possible without a piece of hardware many take for granted. It's a technology that traces back to the earliest days of modern personal computing, one that people tend to associate more with World of Warcraft than newfangled widgets on wheels.

We're talking about the graphics processor.

In mainstream personal computers, the graphics processor -- often found on a graphics card -- is what allows computers to draw all those pixels and polygons that make up today's photo-realistic video games. But as these processors have grown ever more powerful, engineers have discovered their utility in all sorts of nongaming applications. Graphics processing units -- or GPUs -- have transcended their origins to become entire computers in their own right.

"[The GPU] is now powering everything from games to the visual effects you see in Hollywood films," said Danny Shapiro, the senior director of automotive at Nvidia, which accounts for roughly 75 percent of the $7.8 billion market for graphics processing units. GPUs, said Shapiro, are central to "professional graphics, for automakers that are designing cars, to doctors and researchers that are searching for cures for cancer and using medical imaging techniques."

It's a sign of how big the GPU business has grown that some 200 other companies work with Nvidia's automotive unit alone. GPUs are even part of the brains behind artificial intelligence, appearing in technologies such as the Amazon Echo, which converts natural human speech into data that machines can understand.

"The combination of GPUs and a CPU are now available that can accelerate analytics, deep learning, high-performance computing, and scientific simulations," Chris Niven, research director for oil and gas issues at the research firm IDC, told ZDNet last month.

Traditionally, the brain in most personal computers has been the CPU, or the central processing unit. These chips are made by companies such as Intel. Apple also has been making its own, proprietary chips for the iPad and iPhone. The distinguishing feature of this technology is that it's designed to run calculations serially, one after another, very quickly. The rise of dual- and quad-core CPUs have expanded their capabilities, allowing for more computations to occur simultaneously.

These chips are still ideal for machines that only need to run a few processes at the same time. But when it comes to technology such as self-driving cars, where the computers are constantly receiving and digesting information, multitasking becomes that much more important. And that's where GPUs excel.

Computer researchers began to discover the potential behind GPUs as far back as the late 1990s, when the market was awash with dozens of competing chipmakers. Their products found their way into desktop computers and gaming consoles like the Sega Dreamcast and Xbox, enabling consumers to experience groundbreaking titles like Half-Life, Quakeand Halo. By simultaneously and efficiently controlling the generation of shapes on a screen, GPUs helped bring first vector graphics, and then individual pixels, to life.

By the early 2000s, GPUs were being pit directly against CPUs in computing tests, with some results showing enormous promise for graphics processors.

"Researchers at universities realized that, 'Hey, here is this low-cost processor that we can apply to scientific and mathematical applications and get some acceleration for cheap,'" said Jon Peddie, president of Jon Peddie Research, an industry analysis firm.

One paper in 2002 found that compared with CPUs, "the graphics hardware allows us to establish a high-speed custom data processing pipeline. Once the pipeline is set up, data can be streamed through with devastating efficiency."

The best GPUs on the market today come with as many as 5,000 cores, said Peddie, not just two or four or eight as with CPUs. While CPUs can process smaller amounts of information very quickly, the advantage of GPUs has to do with scale -- processing lots of information at the same time.

This is why self-driving cars find GPUs so useful. Through the use of optical cameras, laser and radar sensors, cars look at their surroundings by taking many measurements per second.

"It's 30 pictures every second," Shapiro said. "Each picture, a single frame, is made up of pixels. Each of these pixels or dots is a numerical value that says, 'What is the color of the light there?' It's just a bunch of numbers."

GPUs like the ones found in self-driving cars are designed to crunch those numbers and figure out that some of those pixels represent an obstacle, whereas other pixels are lane markings and still others are traffic lights. While GPUs weren't originally invented for those purposes, car engineers began taking advantage of the technology's parallel computing powers about six or seven years ago, according to Peddie.

"The original use of GPUs in an automobile was for the instrument panel in the entertainment system," he said. "It's only been recently that people have been saying, 'Hey, we can do this, or that!'"

Within automobiles, many stand-alone processors that once handled a single function -- such as the anti-lock brakes or the power windows -- will all someday be routed through a single processor, the GPU, said Shapiro. And cars increasingly will work like Tesla's automobiles, where drivers might customize vehicles by picking and choosing different software packages to suit their driving style.

"You can almost have in-app purchases to add new features that weren't there when you bought it," he said.

For gamers who've grown accustomed to buying expansion packs to their software -- also known as downloadable content -- this idea might sound very familiar.