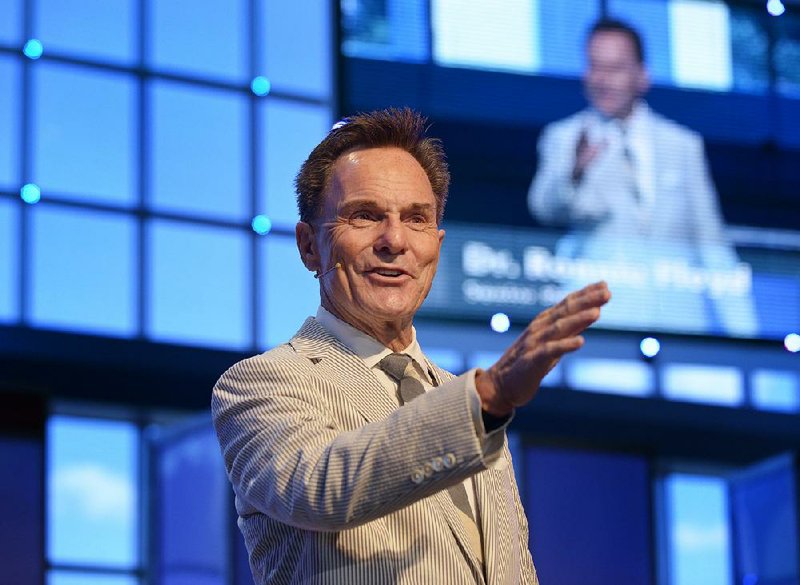 Dr. Ronnie Floyd, senior pastor of Cross Church and president of the Southern Baptist Convention, is shown in this 2016 file photo.

WASHINGTON -- Cross Church Pastor Ronnie Floyd prayed for President Donald Trump in the Oval Office this week, asking for God's blessing as a large group of evangelicals surrounded the president and bowed their heads.

Many of the ministers laid their hands on Trump's shoulders during the invocation. A few steps away, Vice President Mike Pence closed his eyes and listened as the Northwest Arkansas minister spoke.

Monday's meeting wasn't listed on the president's public calendar. Word spread after a participant posted photos of it on social media.

The faith leaders had been invited to the White House to discuss religious freedom and other matters with a representative of the office of public liaison, officials said. They weren't told ahead of time that they'd be ushered into the heart of the West Wing.

The vice president was the one who summoned them, Floyd said in a telephone interview Wednesday. "He came over and stated that the president ... wanted to say hello to us."

"He'd just gotten back from his trip overseas," Floyd said. "His spirits [were] good, very hopeful."

The White House said the visit was a last-minute addition to Trump's schedule and was unrelated to any recent political developments.

"The president learned that they were visiting and invited them to the Oval Office where he greeted them warmly. It was an impromptu meeting, not planned," a White House spokesman said. "As an advocate for religious liberty, President Trump has a strong relationship with many in the faith-based communities."

Floyd did not endorse a presidential candidate but joined Trump's faith advisory board during the 2016 campaign.*

The church he leads has locations in Rogers, Springdale and Fayetteville.

Televangelist Paula White, a friend of the president, suggested Monday's prayer, and Floyd was asked to give it.

The pastor said he wasn't expecting to be called upon but was glad to oblige.

"I prayed for protection for the president and the vice president because we live in a very difficult day in our country. I prayed for God to lead them and for them to rely on the Lord for strength and for wisdom," he said.

It's a prayer he's given, in one form or another, countless times.

"I prayed every day for President [Barack] Obama and his family, and I have faithfully done that through the years."

Monday's prayer was special, however.

"I'd never been in the Oval Office and, obviously, it was unexpected," he said. The room "reeks with history, your mind races to all the great decisions of our nation, all of the incredible challenges of every president that's ever held the office."

Now that he's back in Arkansas, he'll continue praying for the nation's leaders, regardless of party affiliation, he said.

"This is not about who's right and who's wrong, who's Republican, who's Democratic or who's independent. There's none of that in Scripture. The Scripture says to pray for the leaders of our country. ... Those of us who know God and know Christ personally, we need to do that."

*CORRECTION: Cross Church Pastor Ronnie Floyd Floyd never endorsed a presidential candidate in the 2016 campaign. His endorsement stance was incorrect in a previous version of this article.