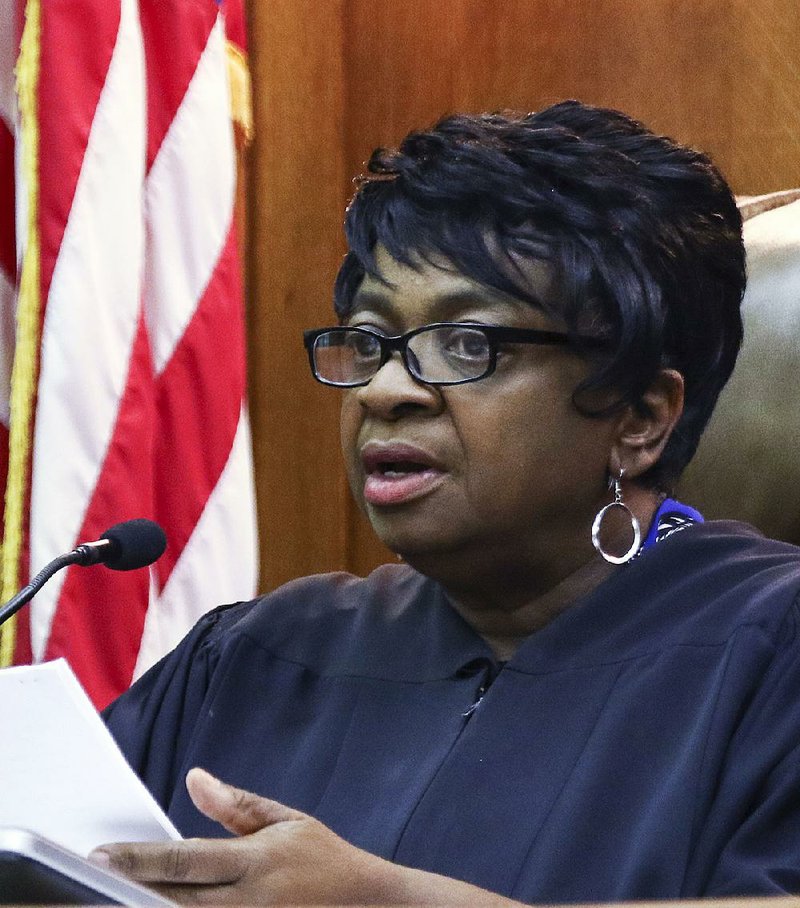 But the judge said she needs more time to consider whether she has any further jurisdiction over the proceedings. At issue is whether state attorneys can move the proceedings to another judge in another county under a new statute that has never been court-tested.

Gray promised a decision on the jurisdiction issue as soon as possible.

McKesson wants the judge to make Arkansas return the supply of vecuronium bromide the company sold to the prison department last year. The company is accusing Department of Correction officials of tricking its salesman into selling them the paralytic, then reneging on a promise to return the drugs when McKesson refunded the state's payment.

The bromide is one-third of the drug combination Arkansas uses for lethal injections. The state carried out four of eight planned executions in April before the supply of another drug it uses passed its use-by date.

Arkansas does not have enough of the necessary drugs to conduct further executions, and none have been scheduled.

State attorneys deny that Arkansas officials did anything wrong, calling the litigation a case of "seller's remorse" brought on by the public disclosure of McKesson's role in providing the paralytic, a disclosure that could open McKesson to government sanctions in Europe and from the bromide's manufacturer.

State Attorney General Leslie Rutledge has been pressing for the lawsuit by McKesson Medical-Surgical Inc. to be transferred to Faulkner County Circuit Court since the litigation began in April. But Rutledge will not say why she prefers that court.

Wednesday marked three months since the lawsuit was filed, and Rutledge's spokesman continued to decline to answer questions about the attorney general's insistence on moving the lawsuit out of Little Rock, the usual venue for civil actions against the state.

Senior Assistant Attorney General Jennifer Merritt told the judge the state has an "absolute right" to change courts under the new law, Act 967 of 2017, arguing that the statute requires Gray give up jurisdiction to Rutledge's choice of Faulkner County.

The law, which was passed and went into effect about a week and a half before the lawsuit was filed, allows the government to have any suit brought against it moved to any circuit court of its choosing if the plaintiff is not an Arkansas resident.

Attorney Michael Heister, representing McKesson, told the judge that the company is sufficiently established in Arkansas, through a distribution center in Little Rock, to meet the standard for residence.

He said the state attorneys are trying to get Gray to apply a different standard, state citizenship, as the test for whether the litigation remains in Little Rock.

"Our point is, the venue statute doesn't talk about [citizenship]; it talks about residence," Heister told the judge. "We are a resident of the state under the statute. We pay taxes."

The company, an arm of the international health care giant McKesson Corp., sued to block the state from using the vecuronium bromide the company had sold to the Department of Correction last year.

The drug is a general anesthesia recognized internationally as an essential medication, but McKesson and the drug's manufacturer, Pfizer, don't want it to be used for executions.

The company has also asked for the drug to be returned.

Two Pulaski County circuit judges, acting in separate proceedings, sided with the company and ordered the prison department not to use the paralytic.

But the Arkansas Supreme Court overturned those orders on emergency appeals by Rutledge, so the state was able to use the drug in the four executions that were conducted.

About 30 minutes of Wednesday's proceeding involved Merritt trying to convince an obviously skeptical Gray that the judge still had jurisdiction over the case, even though the attorney general's office has appealed the judge's April ruling to the Arkansas Supreme Court.

Gray had ordered the Department of Correction not to use McKesson's bromide, which would have halted the executions. But the high court suspended Gray's order while the justices consider whether Arkansas' sovereign immunity shields it from the McKesson suit.

Gray ruled in April that the state isn't immune from the McKesson suit. The attorney general's appeal has lodged the immunity question with the superior court, Gray said. So how could she also take up the same question again until the Supreme Court makes its decision? Gray asked.

"That concerns me," the judge said. "I don't want to run afoul of an appellate court's right to decide an issue."

Merritt argued that Gray still had the authority to rule on the immunity question. The attorney said she expected Gray to again reject the immunity argument.

But that second rejection, which Gray presented on Wednesday, would allow the state to bring a fully decided appeal to the high court as opposed to the partial appeal that got underway in April, Merritt said. One appeal instead of two will save both courts time and effort, she said.

Otherwise, with the Supreme Court now on its summer vacation, the state would have to go through two appeals before the immunity issue was resolved, a process that could take at least eight months, Merritt told the judge.

Merritt said the vitality of the McKesson medications is also at stake. Arkansas has already lost one of its three death-penalty drugs, the sedative midazolam, because the medication expired in May.

"Meanwhile, the clock is ticking on the expiration date of these drugs," she said.