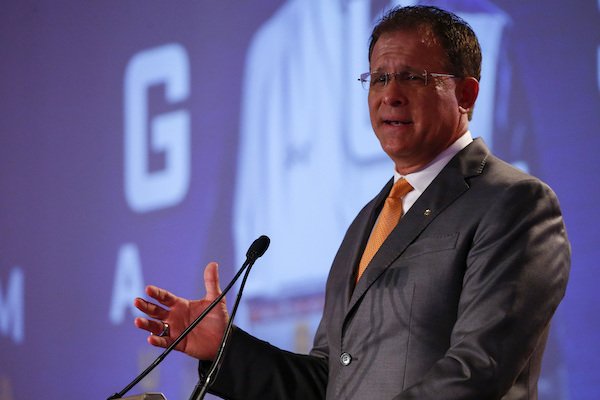 HOOVER, Ala. -- Many members of the media have assumed Baylor transfer Jarrett Stidham will slide immediately into the starting quarterback role at Auburn.

White struggled to stay healthy last season, but in 11 games he posted an SEC-best 63.9 completion percentage (133 of 208) for 1,679 yards with 9 touchdowns and 3 interceptions.

"The biggest comfort right now is we have quality depth at the quarterback position," Malzahn said last week during SEC football media days. "Jarrett Stidham is a very talented young man. I think that's a common sense deal. What he's done since he's been at Auburn, just his leadership, he's really done a good job trying to win over his teammates with his work ethic.

"Sean White. I'm very excited about Sean White. When Sean White's healthy, he plays at an extremely high level. Last year when we got on that roll, that six-game [win] streak, he was leading the league in completions and quarterback efficiency.

"If he hadn't got hurt, it would be completely different, I believe. ... We had a real chance."

Malzahn called White and Stidham "two real guys, we know that for sure. That's a great security blanket coming forward this season."

Malzahn called a lack of depth at quarterback the Tigers' Achilles heel the past two seasons.

The Jacksonville native, whose nickname is K-Rich, walked on with the Razorbacks, earned playing time as a redshirt freshman and is now a team captain as he returns from surgery to repair a torn pectoral muscle after last year's season-opening victory against Louisiana Tech.

"It's a dream come true for any guy from the state of Arkansas, just being able to come from being a walk on, to a starter to being voted team captain and now to be at SEC media days," Richardson said. "It's big."

Arkansas Coach Bret Bielema talked about Richardson during his opening remarks in the main ballroom at media days.

"Just really embodies everything I believe in," Bielema said. "He's a little undersized, under-recruited, under-developed coming out of high school. We presented an opportunity for him to walk on.

"Really in the first two weeks, I knew we had something. Probably one of the most intelligent football IQ players I've ever been around."

South Carolina quarterback Jake Bentley hung out extensively with Alabama quarterback Jalen Hurts, a fellow sophomore, at the Manning Camp this summer and he can dispel some notions about a perceived Hurts weakness.

"Jalen looked great," Bentley said. "All that crap about he can't throw it, that's untrue. That dude can spin it."

Senior Jake Hubenak is in the mix along with redshirt freshman Nick Starkel and true freshman Kellen Mond.

"Jake has played for us," Sumlin said. "I think his first couple years he was a little tentative because he was behind some guys and really wanted to learn. But I see him right now as a mature guy that understands that he wants it.

"Nick can throw it through a wall. ... Kellen is really a phenomenal athlete, one of the top guys in the country coming out."

Hubenak played in 13 games the past two seasons and completed 101 of 179 passes for 1,283 yards and 9 touchdowns with 3 interceptions.

Arkansas center Frank Ragnow touted his Grizzly Man Outdoors web page, created with his brother Jack, on which fishing, camping and outdoor activities are the focus.

At SEC media days, Ragnow wore a sports coat with "Grizzly Man Outdoors" sewn into an inside panel.

"I've got to be better at promoting that," Ragnow said while opening the coat for the cameras.

Texas A&M lineman Koda Martin shared a story told by new strength and conditioning coach Mark Hocke, who spent six seasons on the staff at Alabama and has also worked at Georgia and Florida State. Martin said the story came from Hocke's days at Alabama, when a player threw up on an airplane, causing a domino effect.

"If one person is freaking out, everybody is," Martin said. "Comparing that to workouts and if you're in pain, vocalizing that is poison."

Florida defensive back Marcell Harris had the longest hair at SEC media days, and he had it woven tightly and piled on top of his head, rising about six inches above his scalp.

SEC Network analyst Anthony "Booger" McFarland asked Harris how long he'd been growing it and described himself as jealous.

"You have to stay strong through the whole process, because it gets hot," Harris said. "I'm probably going on my 11th year."

Arkansas quarterback Austin Allen faced plenty of questions at media days about the length of his flowing locks, and it turned out his look was the byproduct of a bet with ex-Razorbacks tight end Hunter Henry.

"This is a bet that I had in September," Allen said. "We were supposed to go through the season, and then we go through it and I was like, 'Well, I just wear a hat every day anyway, so I might as well' and this is it now. Which I don't know how much longer I can keep it, so we'll see."

Allen said Henry "destroyed" him in the bet to see whose hair could grow longest during the season in both 2015 and last year "with him in San Diego, where his hair grows like a wildfire."

Muschamp said Moore engaged in a one-on-one drill on the first day of contact in spring ball.

"He went right after it and threw his eyes in there, and it was awesome," Muschamp said.

"Don't worry about Skai," Gamecocks tight end Hayden Hurst said. "I had to face him every single day in practice. He's the same old talent, I promise."

Shaw said there were an average of 2.2 stops for reviews during games, 226 total stops in 103 games with an average review time of 1 minutes, 26 seconds.

"That is right on our two-year average," Shaw said. "We need to drive that time [of games] even lower, and that's one of the things we're going to work on this year."

Shaw said the SEC had 26 targeting fouls in 2016, 5 of them initiated from the review booth, with 16 of the calls confirmed, 5 allowed to stand and 5 overturned.

Arkansas safety De'Andre Coley drew two of those calls, against Texas A&M and Ole Miss, and he was ejected for both.

Guice wore a salmon-colored jacket, which he claimed came straight off a store mannequin.

Gray donned a suit in a shade of pink and Samuel sported a leather jacket Thursday.

"This is just a gold leather jacket," Samuel said nonchalantly.

Drew Lock, a junior going into his third season as Missouri's starting quarterback, said he's been impressed with Taylor Powell -- a true freshman quarterback from Fayetteville -- during summer workouts.

"Taylor's a smart kid," Lock said. "He's learned our offense very quickly. He's got a lively arm. I think he'll be a good quarterback for Missouri in the future."

"It's been intense," Texas A&M tackle Koda Martin said of playing the Razorbacks. "They've had some really good teams."

"I really respect Arkansas' program and it's been fun to compete against them year after year," Martin said. "I'm thankful to be getting those wins."

"When you win four games, believe me, it hurts your soul," Odom said.

But Missouri's fourth victory gave the program momentum as the Tigers rallied from a 24-7 halftime deficit to beat Arkansas 28-24 on Nov. 25.

"I think that was huge for us, just to be able to look back in that game and see the deficit that we had and the toughness and grit we showed in coming back," junior quarterback Drew Lock said. "It just shows the type of team we can be, that we will be. It was a Missouri team that had both offense and defense working together. We had a tough time getting that last year, and that's why we only won four games."

SEC supervisor of officials Steve Shaw pointed out that 2017 is an off-year for rules changes except those regarding safety, and he brought up a couple of changes in that regard.

On kicking plays, defenders can no longer get a running start and leap over blockers in an attempt to block a kick, Shaw said.

Also, the horse collar rule has been expanded to penalize grabs in the nameplate area or upper back of the shoulder pads that lead to immediate snap-backs of the head. The rule does not apply to runners inside the tackle box.

Another point of emphasis is coaching conduct, Shaw said while discussing a new unsportsmanlike conduct penalty on head coaches if they come on to the playing field to protest officiating decisions.

"The goal is not to flag coaches, it is to change coaching behavior," Shaw said. "If they stay within the boundary, they'll have all the latitude they've had in the past."

"I think the intent of the rule, to keep coaches off the field, is good in nature, especially when they start seeing some of the replay of really all conferences, all levels."

Shaw is scheduled to add the duty of NCAA secretary rules editor Sept. 1.

Alabama Coach Nick Saban said his team has had 101 players who have earned their degrees participate in bowl games and playoff games over the past four years.

Florida Coach Jim McElwain, the fourth coach at the podium Tuesday, noted the lack of enthusiasm in the big print media room.

"How's everybody doing?" McElwain asked with vigor. "I can see the energy in here is just ... It can't be that bad."

Arkansas quarterback Austin Allen was asked what he thought about his brother, Brandon, having a hand massage in between the Senior Bowl and the NFL Scouting Combine in 2015 after his hand size drew criticism at the Senior Bowl in Mobile, Ala.

"He did what needed to be done, I guess," Austin Allen said Monday. "His hand got bigger after the massage."

A reporter asked Austin Allen about his hand size.

"Bigger than his, I think, hopefully," he said. "Hopefully I don't need a massage."

"I know you guys are all looking for quotes," Bielema said, grinning. "I don't think I can go much further than that one. ... That was in a small group session and that was before I had a child, so I'll just leave it there."

Mississippi State Coach Dan Mullen knows about the rigors of competing in the SEC West for the past eight years.

Auburn senior safety Tray Matthews, dubbed the leader of the Tigers' defense, said the trouble he got into at Georgia as a freshman is well beyond him now.

Matthews was dismissed at Georgia by then-coach Mark Richt after he and three other players were charged with misdemeanor theft by deception for double cashing school-issued financial aid checks.

"I just basically got back to my roots and started doing things the right way," Matthews said. "At Georgia, I was a freshman ... very immature. I just had to grow up and that right there grew me up quick. That's all it took."

South Carolina junior receiver Deebo Samuel kept it simple when a reporter asked if the Gamecocks were ready to contend in the SEC East.

Asked to name the best receivers he has matched up against, Dawson's first response was "the slot receiver at Arkansas."

Morgan had a game-high seven catches for 95 yards and a touchdown in the Razorbacks' 31-10 victory over the Gators last season.