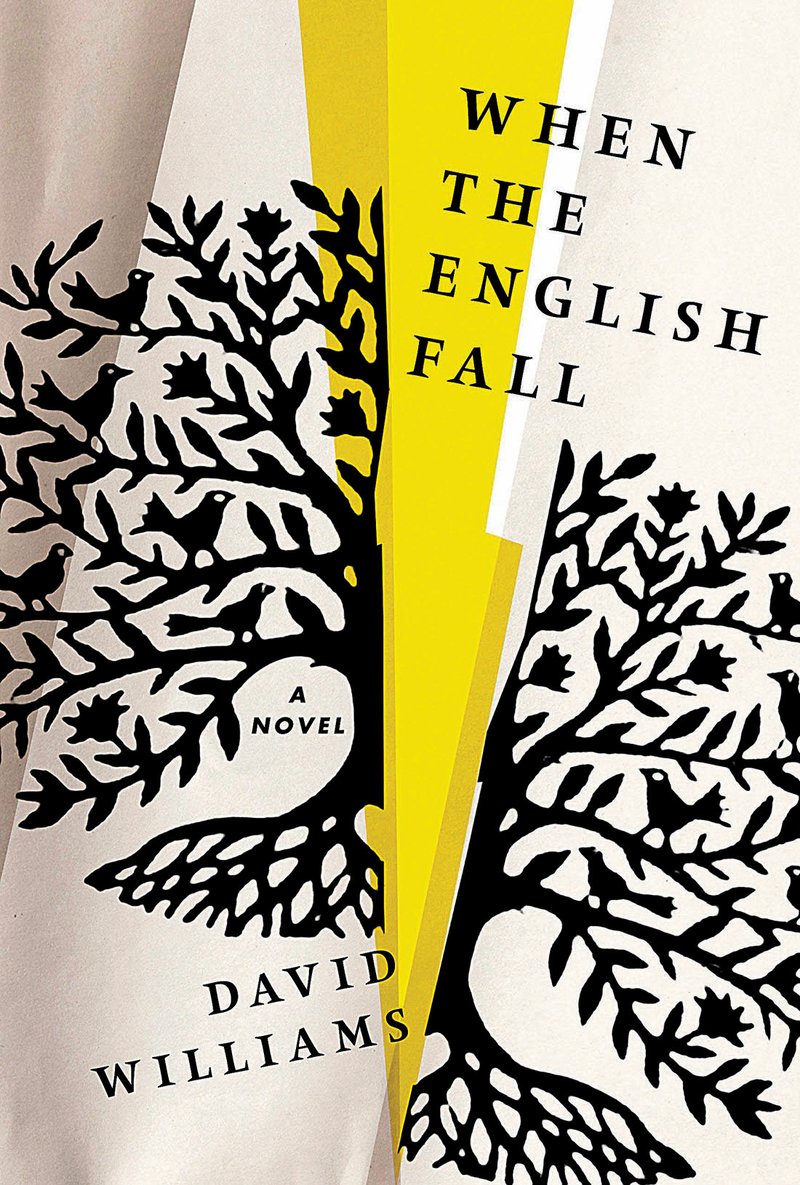 Book cover "When the English Fall" by David Williams, 2017

It is good to be susceptible to simple beauty.

Sometimes we forget this, because we are sophisticated creatures who fly on airplanes and have seen a lot of the world. Because we don't want to appear sentimental or vulnerable to kitsch, we might be careful not to overpraise the man-made thing.

Because we understand books are made of words selected by men and women like ourselves and because we might imagine them smiling at having tricked us into feeling what they contrive for us to feel, we might tend to withhold the highest praise. We might tend to acknowledge the craft before the effect.

But I am reading a book by David Williams called When the English Fall (Algonquin, $24.95) on a flight from Little Rock to Atlanta, and there are tears in my eyes.

Maybe it is because I am especially tender to the story, which is about a Pennsylvania Amish farmer named Jacob and his family in the wake of an apocalyptic climate event that drastically changes the lives of the people outside the Order -- the everyone else the Amish refer to as "the English." Jacob has a 14-year-old daughter named Sadie, who has seizures that cause her to cry out in the night. Jacob sits up with her, rocking her, trying to soothe his "strange little bird."

Sadie has always been different, more sensitive. She has visions about angels and the English falling from the sky, which makes her suspect in the eyes of some. "The women talk about it, and it troubles the deacons," Hannah, Jacob's wife, tells him. She worries that Sadie might not marry, that their daughter will not be able to stay.

And then the event occurs that seems to fulfill Sadie's prophecies: A solar storm disrupts the electrical grid and the English planes fall from the sky. Jacob's community is not immune. They live shoulder to shoulder with English neighbors. Jacob has a business arrangement with Mike, a man from nearby Lancaster who sells Jacob's handmade chairs.

Mike is good-naturedly frank and outspoken. He listens to talk radio; he is beset by modern problems from which the Amish are largely inoculated. He is going through a divorce and a custody battle. He is having trouble with his pregnant girlfriend. He is vexed by politics. Every month the bishop asks Jacob to discontinue his relationship with Mike, but Jacob refuses. He believes that God loves Mike.

When the National Guard asks the Amish to help, they are generous, opening up their larders, filling trucks with jerky and preserves for their unfortunate neighbors. The Plain folk begin to hear news of riots and desperation, and it isn't long before they start hearing gunshots near their farms. Something terrible is coming.

Williams' prose is unornamented and direct, like the lives it depicts. It's told through the daily journal entries Jacob makes, mostly brief entries that lead us gently toward the horror. Jacob is conflicted by his need to record his experiences. He left his father's stricter order in part because writing was considered an act of vanity, especially writing in English instead of Dietsch -- the German dialect spoken by Pennsylvania Amish. Jacob dreams in English, though it is not "the language of [his] soul." This is something else for which he feels shame.

"It is strange, to live in a time like this, when things feel so dangerous," Jacob writes. "But things have been very hard in the past, too. Every day, every day since I have been here in this settlement, I read from the Martyrs Mirror. That old book was a favorite of my father and especially my uncle who, when he preached, would refer again and again to the sufferings of the martyrs through the ages ....

"All of those stories -- of the martyrs, of faith in the crucible of suffering, of how good Christians have experienced and endured times of terrible torture and privation -- I remember thinking to myself, so often, about how far away all of those things seemed. Here we were, and we prospered. Our hard work and diligence was rewarded by Providence. There was food, there was plenty, and our faith was without trial. It was easy to become prideful, or to become convinced of God's protection. ...

"Now, though, the time has shifted. The world itself has shifted. I must trust in my faith, that it will endure this testing.

"Is that not the purpose of faith?"

These days the pious are often used as symbols of hypocrisy or inflexibility, as monstrously certain bigots. Jacob is devout and firm and a hero for our time. And Williams, who we learn from the jacket bio is a teaching elder in the Presbyterian Church, who has written for Omni and Wired as well as The Christian Century, has produced an important and remarkably affecting first novel.

When the English Fall put me in mind of a quotation from Sigmund Freud, which I looked up in Civilization and Its Discontents (1930):

"The element of truth behind all this, which people are so ready to disavow, is that men are not gentle creatures who want to be loved, and who at most can defend themselves if they are attacked; they are, on the contrary, creatures among whose instinctual endowments is to be reckoned a powerful share of aggressiveness. As a result, their neighbor is for them not only a potential helper or sexual object, but also someone who tempts them to satisfy their aggressiveness on him, to exploit his capacity for work without compensation, to use him sexually without his consent, to seize his possessions, to humiliate him, to cause him pain, to torture and to kill him. Homo homini lupus. [Man is wolf to man.]"

Considering human history, it's hard to discount Freud's point. When he wrote Civilization and Its Discontents (its original German title is Das Unbehagen in der Kultur, "The Uneasiness in Culture") Hitler was ascending to power and World War I was still fresh enough to be called "recent." The bloodiness of the 20th century was just coming into full flower.

I ran across Freud's quote again late in Ewan Fernie's Shakespeare For Freedom: Why the Plays Matter (Cambridge University Press, $54.95), a serious and at times exhilarating attempt to reconsider (perhaps rescue) Shakespeare from the sort of obligatory respectfulness that accrues to ubiquity. As with the Beatles, it's often easy to forget the radical nature of Shakespeare's work. A claim can be made that he essentially invented human consciousness and allowed us to empathize with people unlike ourselves.

Before Shakespeare, there is no thinking out loud -- hardly any representation of thinking at all. (Maybe a little in Chaucer.) Shakespeare is the first to show people brooding, pondering, rolling things over in their minds and making free choice. We take that for granted now, we assume it is the way we have always imagined ourselves. But you don't find that mode before Shakespeare.

Fernie, the chair of Shakespeare studies at the Shakespeare Institute in Stratford-upon-Avon which operates under the auspices of the University of Birmingham, is bent on demonstrating Shakespeare's continuing vitality and usefulness in the world. Fernie points out that Shakespeare is still relevant because he created characters that are more vividly human than any before or since, and argues that the Bard has had an important influence on many existential and political movements over the years, including the mid-19th-century Chartist Movement, which sought to give working-class Britons the vote.

Thomas Cooper, a journalist in Leicester, established the Shakespearean Association of Leicester Chartists, which used Shakespeare as a kind of Ur text, fashioning a Shakespearean hymn book and finding in Shakespeare's life and work an example of how the "humbly born" might attain "the realms of highest grandeur."

Fernie also touches on Shakespearean themes of freedom in 19th-century Hungarian revolutionary Lajos Kossuth, who sought independence from Austria; David Garrick's Shakespeare Jubilee of 1769 and Nelson Mandela's affinity for a passage in Julius Caesar: "Cowards die many times before their deaths/The valiant never taste of death but once."

Mandela signed his name next to the passage in the so-called Robben Island Shakespeare -- a tattered edition of the Complete Works of Shakespeare that was smuggled into the prison by Mandela's fellow political prisoner Sonny Venkatrathnam, who disguised it in colorful Diwali cards celebrating the Hindu festival of lights, and told the authorities it was a permitted holy text.

Mandela assumed the book would eventually be smuggled out of Robben Island and circulated through the liberation movement.

Freud pops up again in the last chapter as Fernie discusses his love of Shakespeare and his fascination with "what Macbeth calls 'black and deep desires'." Freud famously developed the Oedipus complex from his reading of Hamlet, and it is tempting to see Freud as a more prosaic analog of Shakespeare, an idea that Freud considered when he admitted "the poets were here before me."

Most of what we think about as Freudian psychology is Shakespeare invention; Freud codified the nature that Shakespeare described.

"Freud, like Shakespeare, insists that our desires are deep as well as dark," Fernie writes. "You're damned if you act on them and damned if you don't. Their containment is also an intolerable crime against human freedom, and one which inevitably leads to psychosis. Civilization is sick, perhaps terminally so; what is intended to safeguard our freedoms in fact wrecks them."

Fernie sees Shakespeare as "deep therapy" for the culture, stressing the ever-changing nature of how we relate to them: "Shakespearean character is always made in interaction, as well as before an audience."

This dynamic nature cuts both ways -- Shakespeare stirs the human animal. Donald Trump goes unmentioned in the book, as does the production of Julius Caesar that featured a Trump-like emperor being carved to death.

But he does mention the dueling performances of Macbeth in 1849 of the American actor Edwin Forrest and the English Shakespearean William Charles Macready resulted in the Astor Place Riot in New York, where more than 20 people were killed and many injured. And he also mentions John Wilkes Booth, brother of Edwin Booth, the foremost American Shakespearean actor of his time, jumping to the stage upon which he often strutted in Ford's Theater, shouting a line Shakespeare attributed to Brutus: Sic semper tyrannis.

So Fernie leaves us with a warning: "The plays ... are not in any simple way utopian. They are are politically unstable, always in process. If they are sometimes ethically promising, at others they are undeniably dangerous ... What we do or do not make of them, in contemporary life and politics, is our responsibility." 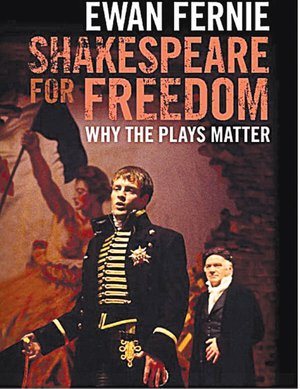 "Shakespeare for Freedom Why the Plays Matter" by Ewan Fernie