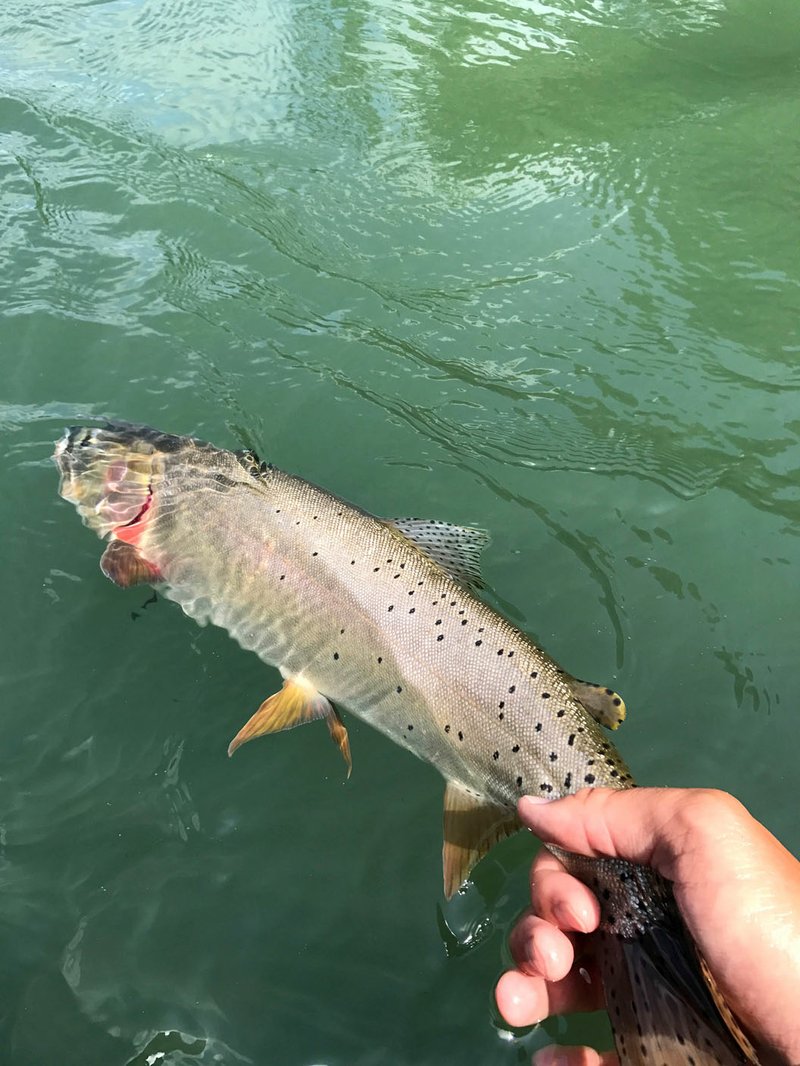 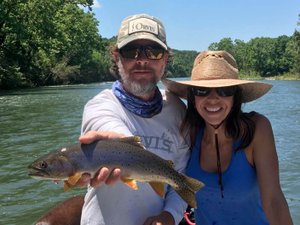 Photo by NWA Democrat-Gazette/CLAY HENRY
Kristopher Bouldin, a Norfork tailwater guide, shows a cutthroat trout caught by his wife, Becca. Kristopher said his clients are catching the new trout one out of four trips. 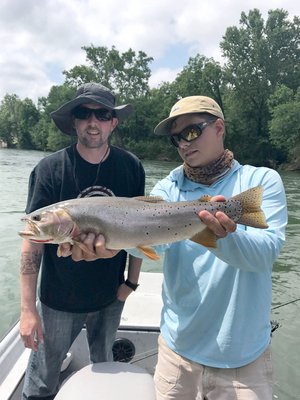 Photo by NWA Democrat-Gazette/CLAY HENRY
Sean Paquin of Rogers and Cotter guide Brock Dixon show a Bonneville cutthroat trout. Paquin caught a 21-inch Bonneville in the Norfork River on May 26.

The fish summoned smiles from those who participated in what many thought was a highly ambitious project five years ago on the two popular Ozark streams.

The Bonneville is one of 15 recognized subspecies of cutthroat trout. All cutthroat trout have a “cut,” a patch of orange or red on the throat. They differ from the rainbow trout because they have teeth in their throat between the gill arches, they typically have longer heads and jaws and often times larger spots.

The first will be 6 to 8:30 p.m., Aug. 3 on the Arkansas State University Campus in Mountain Home in the Vada Sheid Community Development Center, convention center rooms A and B.

The second is set for the same place and time of day on Aug. 24.

T.L. Lauerman of Mountain Home helped organize the preparation and plantings with a throng of volunteers, mostly from Trout Unlimited chapters in Arkansas. Volunteers joined from five other states, some as far away as Wisconsin.

The shared passion for fly fishing, worry over funding for the local hatchery and a strong desire to introduce a strain that could possibly reproduce and spawn motivated many of the volunteers.

They prepared and planted the eggs with the blessing of the Arkansas Game and Fish Commission, and their efforts appear to have paid off with more and more anglers catching Bonnevilles.

There is even a growing suspicion the desired spawn has happened, although the proof may be a year or two away. Anglers, meanwhile, worry regulations won't protect the mature fish needed to produce a good spawn.

Bill Thorne, the Arkansas representative to the Trout Unlimited National Leadership Council, said the project was a success from the start for his group.

"Any time you get boots in the river, it's a win-win for us," Thorne said. "Now that we see mature fish, I feel like a father. You talk to any of the other 50 volunteers, they all feel like proud parents."

Volunteers did a double planting in the Norfork in 2015 because of high water levels on the White. That meant a double hatch in the Norfork. There won't be a planting this year because of high water. Last year's planting was canceled at the last minute after Wyoming officials discovered disease in a few of the hatchery fish that produced the eggs after they had been shipped to Arkansas.

Whitlock is famous for redesigning the egg boxes -- the Vibert-Whitlock Egg System -- that were used to plant the brown trout eggs in the White and Little Red Rivers in the 1970s. Whitlock lives near Tahlequah, Okla., where he and wife, Emily, operate a fly fishing school and teach painting. He lived near Mountain Home for three decades after resigning as a chemist to pursue fly fishing ventures.

Lauerman would like to give the two rivers one more planting in June 2018 to hit the goal of five years.

"Maybe we can continue it past that, but we didn't want to do anything less than five times," he said. "By doing five, we've given it a good shot of getting enough mature fish in the rivers to see if they can survive and spawn."

Catch rates in the Norfork have raised eyebrows and excitement from fly fishing guides. Lauerman receives texted photos of Bonneville trout almost daily, and the fish are getting bigger. Reports also are coming in from the White below where the cutthroats were planted at Rim Shoals.

Guide Davy Wotton has seen his clients catch more than a dozen.

Rogers angler Sean Paquin caught a 21-inch Bonneville on the Norfork while fishing with Cotter guide Brock Dixon on May 26. Dixon has had anglers catch massive trophy browns, one as long as 36.5 inches, but he's just as proud of the 21-inch Bonneville cutthroat Paguin landed.

"We didn't really know what we had at first because the water was off-color," Dixon said. "But I knew it was a big deal when we got it in the boat. Sean didn't because he had never been fly fishing before. But that's the beauty of a fish like this, it provides a chance for education.

"We both got excited pretty quickly and when we ran into some other guides on the river and showed them the picture, Sean saw the shock that his catch produced and then he really got excited."

Kristopher Bouldin, a Norfolk guide, said the odds are good his clients will catch the new cutthroats.

"I'd say my clients are catching them on one out of four trips," he said. "It's becoming more frequent of late, and we are catching good sized fish and smaller fish, too. Some days we catch three or four."

Guide Nathanael Ferguson of Mountain Home also caught a big Bonneville in late May. It was another Norfork fish, this time measuring 19 inches. Like the one caught from Dixon's boat, it was fat and fought like crazy.

"That's the whole point with planting the eggs, you've got tough, wild fish raised from eggs, and they spent their entire life in the river," he said.

"The next thing is to see if they spawn. It would complete the project."

The idea the Bonneville trout could spawn is not a reach, but it's not a sure thing.

"We are not sure about the genetics of these eggs," Whitlock said. "We know they came from a hatchery. The evidence shows that if they are third generation hatchery, the female loses the ability to spawn. They don't know how to nest properly.

"So the hope is that these eggs were not from overly domesticated fish. If there are some that fit the correct genetics, then they will spawn. That will be a great thrill if that happens."

He recalled the thrill years ago when it became evident the browns were returning to spawn where eggs had been planted.

Bouldin, who participated in the egg planting, said he thinks the Bonneville trout have spawned.

"I saw the spawning beds this spring, exactly where the eggs were planted five years ago. I saw fish over the beds, although I can't confirm they were Bonnevilles," he said.

He added he didn't think the fish he saw were brown trout because they spawn in the late fall.

Whether the spawn was effective isn't clear because the flood gates at Norfork Dam were opened later in the spring. If those first mature Bonnevilles spawned, it's likely they will continue and it will grow as the next three hatches mature.

The new trout's presence causes one clear concern: protection. Arkansas Game & Fish has stronger regulations for cutthroats than for rainbow trout -- only two can be kept, and they must be 16 inches. But the mature Bonneville adults need to be protected to achieve a spawn.

A slot limit might work with bigger fish. A slot limit allows an angler to keep only fish between two lengths. If the slot limit is 10-16, fish 9 inches and below and 17 inches and above would be released. That would mean the small juvenile fish and the trophy size capable of spawning would stay in the river.

Lauerman said he'd be pleased with a reduction to just one Bonneville per day, although perhaps with a much longer length. He'd propose something like the 24-inch minimum for brown trout instituted on the Norfork and White four years ago, a change that has produced an increase in large browns.

"What I've seen is a huge change in the conservation mindset on these two rivers from the guides," Lauerman said. "They would be for new regulations if this produces another great wild trout species on our rivers. We think we are on the verge of something incredible."

"We've already talked to a couple of individuals who have called for more protection," Graham said. "We're going to revisit the management plan and consider it. Getting more protection is definitely on our radar."

Graham emphasized the new trout is not a threat to any native species and noted all eggs are certified as disease free.

The success of the Bonneville planting exceeded expectations, Lauerman said.

"There were a lot of naysayers when we talked about this project. There were naysayers back in the 1970s when Dave began the project with the boxes he designed to plant brown trout eggs in the White and the Little Red. The bulk of our brown trout population is because of those plantings. People were skeptical then, but we've got a tremendous brown trout fishery now.

"We wanted to prove again that you can have a successful egg planting in our rivers. We needed a marker fish, something that would be easily recognizable. So that's why we went with the Bonneville cutthroat."

The Bonneville trout have much bigger spots and more sporadic than the Snake River fine-spotted cutthroats. The differences are obvious and there has never been Bonneville cutthroat trout in any Arkansas river.

"It's a landmark project," Whitlock said. "I'm so tickled. What has been done is introduce a new wild trout to our north Arkansas trout fishery. It's going to impact thousands of people."