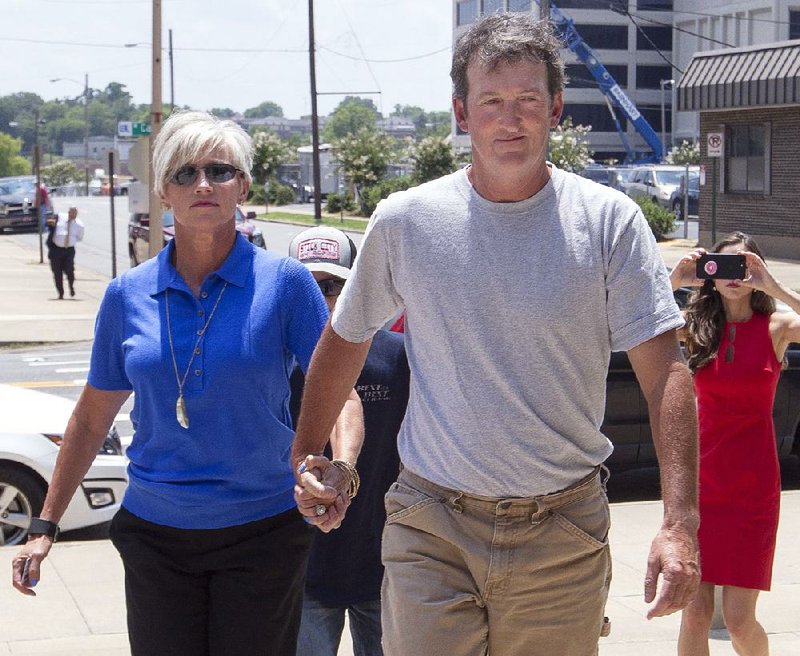 Michael Maggio arrives at the Federal Courthouse with his wife Dawn and two sons in this photo.

Maggio has until Oct. 2 to ask the Supreme Court to consider his case but will file the request sooner, attorney John Wesley Hall said in an email interview.

Last week, Hall had unsuccessfully asked U.S. District Judge Brian Miller in Little Rock to delay Maggio's prison sentence until today, while Hall prepared a petition for rehearing in the 8th U.S. Circuit Court of Appeals in St. Louis. But on Monday, Hall advised the appeals court that Maggio would not seek a rehearing in the 8th Circuit.

Maggio, 56, reported to the U.S. marshal in downtown Little Rock to begin his 10-year prison sentence one week ago today.

The Federal Bureau of Prisons had not assigned him to a federal facility as of Tuesday afternoon. He was being held temporarily at the West Tennessee federal prison in Mason, Tenn.

On why the defense opted to take its case to the Supreme Court instead of the 8th Circuit, Hall said, "As strident as the 8th Circuit was, what's the point?"

Even so, Maggio faces a tough legal process in trying to withdraw his January 2015 guilty plea to a federal bribery charge.

Hall said the Supreme Court agrees to hear one in 90 cases it's asked to consider.

"It's very, very tough," said Kenneth Gallant, a law professor at the University of Arkansas at Little Rock W.H. Bowen School of Law.

"It's a long shot, but the court has expressed interest in these corruption cases. So, who knows?" said Gallant, who has expertise in federal criminal law. "They are working on what the definition of corruption is in federal statutes. So, it would make sense to me why an attorney ... would petition the Supreme Court" in a federal corruption case.

In a 2015 plea agreement, Maggio admitted lowering a Faulkner County jury's judgment in a negligence lawsuit from $5.2 million to $1 million in exchange for thousands of dollars in indirect campaign donations.

The lawsuit was filed over the 2008 death of Martha Bull, 76, of Perryville at a Greenbrier nursing home owned by Fort Smith businessman Michael Morton. On July 8, 2013, Morton signed off on thousands of dollars in donations to several political action committees. On July 10, 2013, Maggio slashed the judgment.

Morton has said he intended for the PAC donations to go in turn to Maggio's campaign for a seat on the Arkansas Court of Appeals, and some did. Maggio later withdrew from that race because of unrelated problems.

In the plea agreement, Maggio implicated Morton and fundraiser Gilbert Baker, a former state senator from Conway. The agreement did not identify them by name.

Morton and Baker have denied wrongdoing but have acknowledged that the plea agreement was referring to them. Neither is charged with a crime.

Before sentencing in March 2016, Maggio sought to withdraw his guilty plea, saying he was pressured into it. Miller denied the request, and Maggio appealed unsuccessfully to a three-judge panel of the 8th U.S. Circuit. That panel recently affirmed Maggio's conviction.

The Arkansas Supreme Court ordered Maggio removed from the bench in September 2014 in part because of contentious online comments he made about various topics. Among them was a legally confidential adoption case involving actress Charlize Theron.