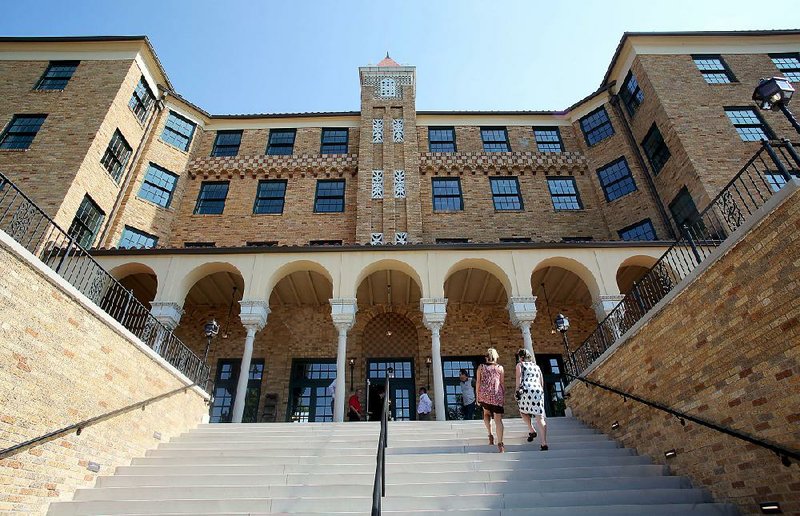 ROGERS -- A building deeply rooted in the city's past is nearly ready to open as a place where young people prepare for the future.

The former Lane Hotel at Second and Poplar streets has been renovated for one of Haas Hall Academy's newest campuses. About 250 students in grades seven through 10 are expected the first day of school Aug. 10.

"I'm thoroughly impressed," said John Burroughs, executive director of the Rogers Historical Museum, after touring the building Tuesday. "I can't think of anything else that would give that building such a long-term future in Rogers as Haas Hall taking up residence, adapting the building, reusing it and giving it new life."

The five-story building's interior combines new classrooms with areas -- most notably the second-floor lobby -- restored to how they appeared when the hotel was built in 1928. The lobby's brick floor is complemented by intricate woodwork carvings on the walls and ceiling.

The room adjacent to the lobby will be used as a cafeteria. It has candle chandelier light fixtures.

"The lighting was found in the basement and is original," said Adrian Risley, Haas Hall's chief technology officer. "They are retrofitted with electricity obviously, but apparently those did hold candles back then."

An artificial fire in the lobby's fireplace will greet students.

Classrooms fill the top three floors. The first floor has spaces for art and music instruction, with large windows so passers-by can see what's happening.

Martin Schoppmeyer, Haas Hall's founder and superintendent, called it the nicest school he's been in.

"I've never seen anything like this in my life," Schoppmeyer said. "It feels good. It's open, you have windows, you get everything. I remember in the dairy barn days, we didn't have more than two windows."

Schoppmeyer opened his charter school with about a dozen students in a converted dairy barn in Farmington in 2004. Haas Hall moved to Fayetteville in 2009.

He opened a second campus in Bentonville in 2015. Two campuses -- the one in Rogers and one at the Jones Center in Springdale -- will open next month. More than 1,000 students will attend the four campuses.

Haas Hall is an open-enrollment charter school, meaning it is run by an entity other than a public school district. Open-enrollment campuses are open and free to students from any district, and they receive state money based on enrollment.

The Rogers building is listed on the National Register of Historic Places. KLS Leasing of Delaware, a company affiliated with the Walton Family Foundation, bought the building for $1.6 million in 2015 and is paying for the renovations, according to Luis Gonzalez, a spokesman for the foundation. Gonzalez did not provide an estimate Friday about the cost of renovations.

Schoppmeyer said the school is leasing the former hotel for $25,833 a month.

Larry Henry, a longtime journalist who worked at the Bentonville campus for its first two years, will serve as headmaster in Rogers.

Henry said he's excited about the building and some of the special features it will include, such as a newsroom, a television production studio, and a kitchen where chefs will emphasize fresh and healthy food.

"We will meet the standards that Haas Hall has set previously at our other campuses," he said.

T.J. LaPlant oversaw the building's renovation for Crossland Construction. There were numerous challenges working with the nearly 90-year-old structure, he said.

"For starters, getting everything to fit in the building," LaPlant said. "Back then they didn't have all the heating and air that we do now, all your ductwork. Our largest challenge to start off with was our ceiling height conflicts."

The Jones Center campus will be ready, too, headmaster Jamie Bendure said.

"It looks fabulous. They're tying up some loose ends," Bendure said. "We are very grateful to the Jones Center for all of the work they've put in to make it comparable to all of our other facilities."

Schoppmeyer said the lease at the Jones Center is $23,484 a month.

Like the Rogers campus, the Springdale school will have about 250 students this year. Enrollment will grow over the next two years as a grade level is added each year.

Bendure is entering her 23rd year in education. She previously worked as a counselor in the Broken Arrow, Okla., public schools. Haas Hall's reputation attracted her to Northwest Arkansas, she said.

Marlin Berry, superintendent of the Rogers School District, declined to address questions related to the opening of the charter school. He wrote in an email that officials are focused on the new school year.

"We are excited about the start of a new school year and all the opportunities we offer our students," he wrote. "Our experienced staff and comprehensive curriculum help students learn and excel at the local, state and national level."

New Tech opened as a district-run charter school in 2013. The district spent about $1.7 million this summer renovating space once filled by Crossroads, the district's alternative school. New Tech ended the 2016-17 school year with about 630 students in grades nine-12.

The Honors Academy started last school year and provides guidance to the highest-achieving high school students on college options and helps them get into the college or university that fits them best.