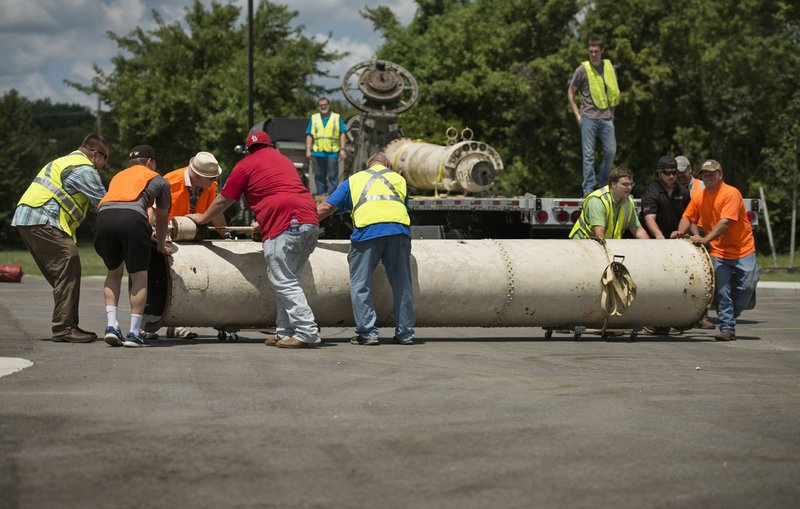 NWA Democrat-Gazette/BEN GOFF @NWABENGOFF Volunteers unload sections of a giant telescope from a truck Saturday for temporary storage at 8th Street Market in Bentonville. Swarthmore College in Swarthmore, Pa., donated the 106-year-old telescope to Supporting STEM &amp; Space, a Northwest Arkansas nonprofit group, in April on the stipulation the nonprofit group would pay for transport. The nonprofit group plans to restore the 36-foot-long, 24-inch diameter refractor telescope and make it the centerpiece of a science education center with a planetarium and observatory.

BENTONVILLE -- Members of Supporting STEM and Space Inc. surrounded a 36-foot-long antique telescope in excitement Saturday as the device arrived by truck to a storage building near the Eighth Street Market where it will be restored, upgraded and eventually used for public outreach, they said. 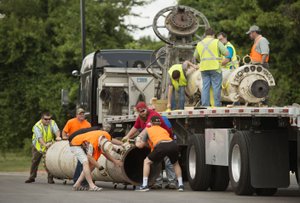 NWA Democrat-Gazette/BEN GOFF • @NWABENGOFF Volunteers unload sections of a giant telescope from a truck Saturday for temporary storage at 8th Street Market in Bentonville. Swarthmore College in Swarthmore, Pa., donated the 106-year-old telescope to Supporting STEM & Space, a Northwest Arkansas nonproÿt group, in April on the stipulation the nonproÿt group would pay for transport. The nonproÿt group plans to restore the 36-foot-long, 24-inch diameter refractor telescope and make it the centerpiece of a science education center with a planetarium and observatory. 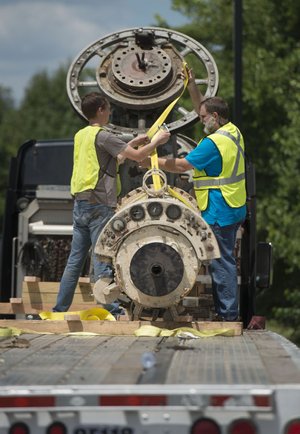 Removal of the telescope began Monday from Swathmore College near Philadelphia. The 106-year-old telescope has an 8,000-pound optical tube and sits on a 50,000-pound base. It's tied with one other device as the sixth-largest refractor in the United States.

• The telescope was built in 1911 by the John A. Brashear Company in Pittsburgh.

• The telescope saw first light at the Sproul Observatory at Swarthmore College.

• The lenses are held in place by a brass ring.

• The telescope has as 24-inch diameter.

"It is hard to describe how big this telescope is," said Clint Branham, board member of Supporting STEM and Space, after inspecting the telescope at Swathmore. "However big you think it is, it's bigger than that."

Supporting STEM and Space, also called S-Cubed, is a nonprofit group created to generate interest in science, technology and math and ultimately to see a science center built in Northwest Arkansas. It began on the community college campus a little more than two years ago.

With a clear vision and mission, the group submitted a proposal to get the telescope.

"To see something come together so quickly is really amazing," said Scott Roberts, founder and president of Explore Scientific in Springdale and an S-Cubed board member. "This is right up there as a top-tier type of project, and to have such a young organization do this is tremendous. It shows you they have not only the passion but the ability to make this happen."

Moving the disassembled telescope required two flatbed semitrailers, plus a cargo van for the glass objective lenses, which are more than 2 feet in diameter with curved sides.

"Lenses this large are no longer made, so the objective is effectively priceless," said Katherine Auld, S-Cubed board chairwoman and Northwest Arkansas Community College adjunct assistant professor.

Once improvements are made, the telescope will be installed in a Northwest Arkansas observatory, the exact location of which remains undetermined.

It serves as the foundation for the planned science center that members hope to build in the area.

"Our timeline originally put construction years in the future. However, after acquiring this fabulous cornerstone for the science center, we plan to accelerate the timeline," Auld said. "The telescope will offer spectacular views of the heavens to the public."

Auld said she estimates restoration time to take from two to five years depending on the funding, which could cost roughly $100,000 and require volunteer work.

One of the updates Auld said the group hopes to add is a video-capture system that will allow the center to stream the view from the refracting telescope's eyepiece to an auditorium or lobby.

In addition to the telescope, the group plans to build a large planetarium to further explore the night sky and to show movies on a variety of subjects from science to entertainment.

A refracting telescope uses a lens at the front of the telescope tube to form an image that is focused by another lens at the eyepiece end. The two lenses of this telescope were polished from solid blocks of "perfect" glass, Auld said.

"As perfect as they could create in 1911," she said. "At that time, it was generally considered to be the most perfect objective ever built."

While it's not top-of-the-line by today's standards, the S-Cubed team seems confident the device will further the group's mission of inspiring others to pursue careers in STEM.

"It's not a research-grade telescope," event chair Dustin Masterson said, "but this is our anchor. This is the thing that is going to light sparks on fire."

Many organizations and community members made donations to fund this project, which cost about $15,000. The company that transported the telescope, Airways Freight, donated a third of the shipping costs, and Explore Scientific covered bulk of the rest, Auld said.

"All the organizations that have contributed so that it is being delivered to NWA at almost no cost to Supporting STEM and Space. We only had to purchase insurance for the basically priceless objective," she said.