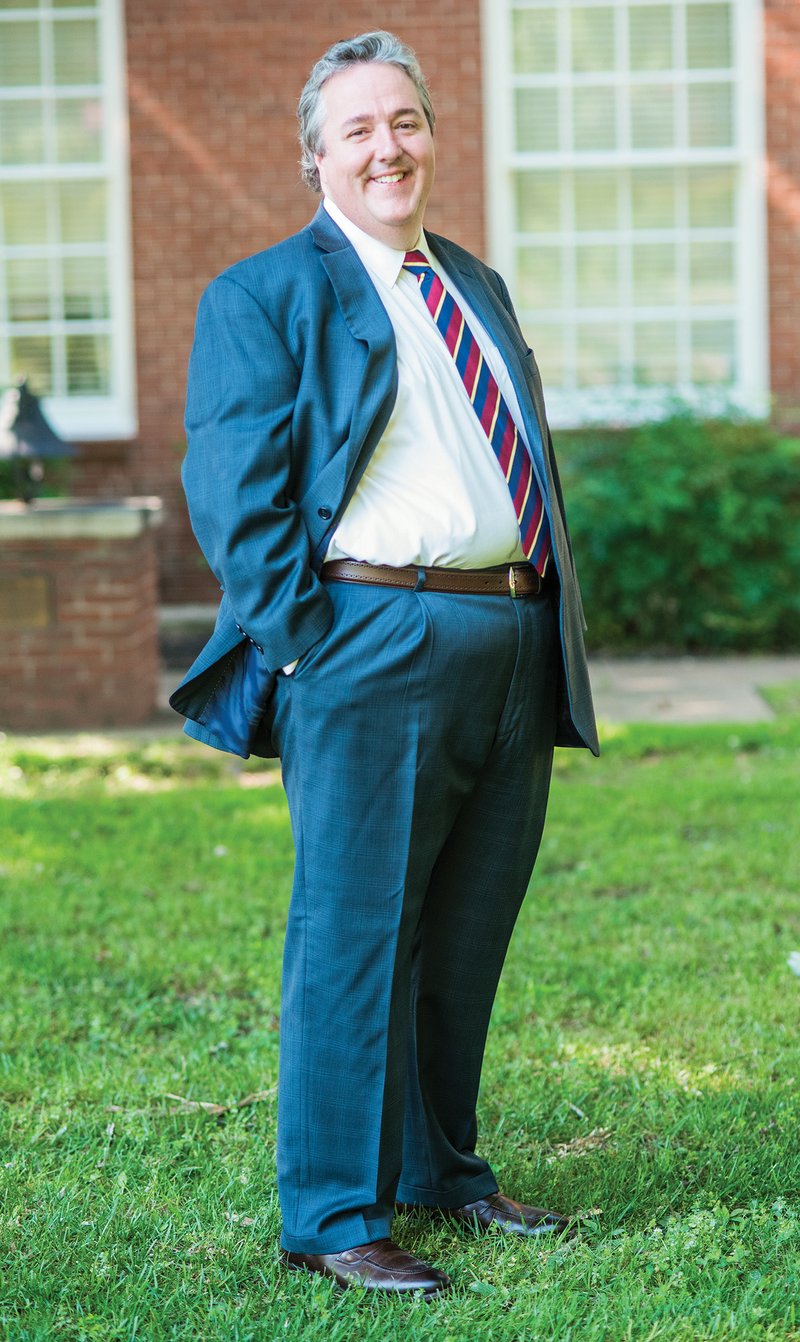 Joseph King is an author, entrepreneur, husband and father.

As of July 1, he is also the newest president of Lyon College in Batesville.

King has traveled the world, stacking up experience, knowledge and friendships along the way.

King served as senior adviser to the president of Emory and Henry College in Emory, Virginia, before moving to Batesville.

In the past, King was executive director of Connexions at Rice University in Houston, a research scientist at the Human Interface Technology Laboratory at the University of Washington, and vice president of innovation at Southwestern University in Georgetown, Texas, among other positions.

King said he would have stayed with Connexions for longer than two years, but his father was diagnosed with lung cancer and later died.

“It was really fast, and we didn’t want to be away for that,” he said.

“In 2009, I went to work at the National Institute for Technology in Liberal Education. It’s an Andrew W. Mellon Foundation-funded project that works with liberal arts colleges like this one, essentially helping them be more efficient and effective,” King said.

King said he worked with the institute until he started his presidency at Lyon College.

Eugene M. Tobin, senior program officer in Higher Education and Scholarship in the Humanities at the Andrew W. Mellon Foundation, said King believes in the value of public and private collaboration and partnerships.

Tobin described King as thoughtful, energetic and an innovative thinker.

“[King] listens well, passionately believes in the transformative potential of liberal education and has great respect for faculty and student-life professionals. He has a terrific sense of humor, a very big heart and a great affection for people of all backgrounds,” Tobin said.

Tobin said the Lyon College community deserves a leader who inspires trust, has a respect for tradition, and acknowledges member and supporter contributions.

“President King has an unusually deep appreciation of the economic, technological and cultural headwinds challenging American higher education. As a successful entrepreneur and experienced academic leader, he understands the importance of building consensus, the value of introducing innovation and the urgency of preparing Lyon’s students for the multiple careers they will have following graduation,” Tobin said.

King said Batesville is a nice small town that has a lot to offer, such as an aquatic center and a downtown area.

“Everyone in Batesville is trying to integrate our shared destinies to make it a more inviting place to be,” he said.

King said his new position will have its challenges.

All higher education has its challenges to deal with right now, such as enrollment and affordability, he said.

“College savings has been less emphasized, particularly in the past 20 years,” he said.

King said he believes Lyon College is a very good value and offers a personalized, one-on-one experience for students.

“Mentoring is our signature quality,” he said. “We’re smaller than a lot of liberal arts colleges, and I think that creates a much stronger mentoring community. It’s very good for students who need that extra support or want a more personalized institution.”

King said his graduating class at Aledo (Texas) High School had 88 students, and he had no desire to attend a large college.

The staff at Lyon College tries to make the college experience all about the students, he said.

The college has tremendous potential for enrollment growth, fundraising and programmatic enhancements that have been relatively untapped, he said.

“The way to tap all of those things is through a highly strategic approach that contains faculty, staff, students, alumni and trustees. In the end, as we spend this first year going through a comprehensive strategic planning exercise, we’ll be involving all of those groups,” he said.

The book, How to Run a College, from Johns Hopkins University Press, will publish in January 2018.

Mitchell said he has known King for six years, and the two collaborate on various projects.

“Lyon College wants to take all of the appropriate actions to remain relevant and become sustainable, despite the many challenges to private colleges in the 21st century. Dr. King literally wrote the book on how to do it,” Mitchell said. “As such, his skill set is almost a precise fit with Lyon’s strategy, capacity and ambition. He’s quite a catch for them.”

King is thoughtful, smart and well-connected, he said.

“Dr. King is well-known on the national stage and has as good a set of skills that translate into how best to be a successful college president as anyone I have met who aspires to this position,” Mitchell said.

Mitchell said he expects King to have an immediate and lasting impact on Lyon College.

“Dr. King is a strategist who understands how to succeed in a very uncertain higher-education environment,” Mitchell said.

When Mitchell initially became acquainted with King in Texas at a meeting of presidents of private colleges and universities, King stood out for his knowledge, humor and wit, Mitchell said.

“He’s a pragmatic optimist who stood out that evening among the crowd as the most interesting person in the room. He still does in almost any setting,” Mitchell said.

King said he plans to use the tested strategies from his and Mitchell’s experiences, as well as come up with new ones at Lyon College.

Lyon College seems like the right fit, he said.

“If I only have one good presidency, that’s fine with me. I was a finalist in a couple of presidential searches of colleges, but I felt that they really just didn’t have the right combination of what I was looking for — the desire to make strategic change and other ingredients, like a nice town,” he said.

It was a multiyear process of being selective, he said.

King said he intends to be involved locally and do as much as he can to engage in community events.

“I plan on going to events, seeing people and being out and about,” he said.

In his free time, King said, he enjoys spending time with his family, writing and fly-fishing.

“Being a college president and a writer, it doesn’t leave a lot of free time on the weekend for much more than family,” he said, laughing.

King lives with his wife, Leigh, and their daughter, Maddie, 14. His stepson, Harris, 20, is attending college in California.

King is originally from Fort Worth, Texas, but moved to Batesville from Emory, Virginia.

“My wife and daughter were excited about moving here. We’re originally from Texas, so this puts us closer to family. That’ll be nice,” he said.

King earned his bachelor’s degree in computer science and psychology from Southwestern University, and his doctorate in human-computer interaction from the University of Washington.

King said he has enjoyed traveling to places such as Japan, Scotland and Southern Africa.

King said he enjoys being on a college campus because of the vibrant, collegial community that comes with it.

“The work we do is transforming lives,” King said.

“I’ve made a commitment to be here for a while, and I intend to keep it.”