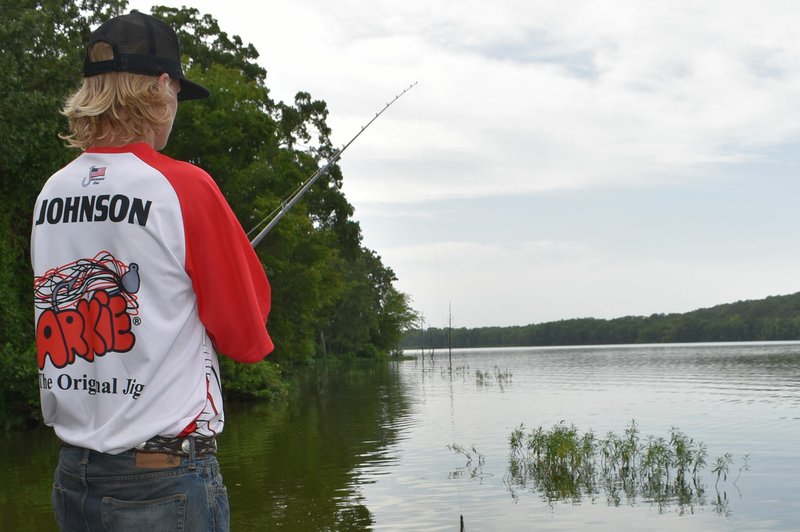 Despite fishing at reservoirs all over the region, Prairie Grove's Dalton Johnson said Bob Kidd Lake remains one of his favorite places to fish. Above, he works a plastic worm around some half-submerged vegetation at Bob Kidd Lake on Wednesday, July 26, 2017. 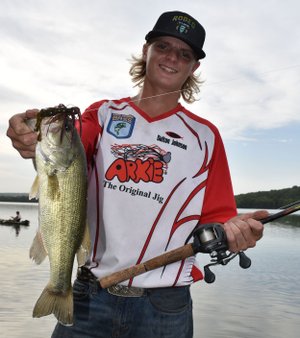 Photo by Mike Capshaw
Dalton Johnson, of Prairie Grove, holds up a bass he caught while flipping an Arkie Jig around a stump on Bob Kidd Lake on Wednesday, July 26, 2017.

But after winning $2,600 in scholarship money from high school fishing tournaments, he altered those plans. Now he hopes to become a diesel mechanic after attending Northwest Technical Institute in Springdale.

“Winning all these scholarships kind of put me into a position where I said, ‘Whelp, looks like I’m going to college,’” Dalton said. “I planned on getting out of high school and just working hard.”

He is part of a fast rising stream of young fishermen in Northwest Arkansas. Johnson’s mother, Luci Johnson, is the tournament director of the Arkansas Youth Anglers. In the past two years, she’s helped the program more than quadruple in size with nearly 50 members from high schools in Benton, Madison and Washington counties.

The club meets once a month with guest speakers who put on seminars about everything from teamwork and sportsmanship to nature study. And, of course, there also are monthly competitive tournaments on reservoirs in the region where the anglers receive prizes thanks to her reeling in corporate sponsors. Those interested in joining can contact Luci Johnson through the program’s Facebook page.

Teaming with Reese Jones of Rogers High, Dalton is a four-time state champion and finished 11th last month at the B.A.S.S. High School National Championship on Kentucky Lake. The duo each earned a $1,000 scholarship for that finish, and that’s no fish tale.

Dalton is a “third-generation” fisherman, following the path of his grandfather, Wendell Johnson, and father, Chris Johnson.

Chris Johnson, a Farmington High graduate who has fished “every local circuit there has ever been,” said it was satisfying to see his son’s early success, but that his son wasn’t completely hooked at an early age.

“I started fishing with him a lot when he was young and almost burned him out on it by the time he was 10 or 11,” Chris Johnson said. “When we got him into a junior club in the fall when he was 12, it just took off. Big time.

“At that point, fishing with kids his own age as opposed to riding around with me to tournaments, it really took on a whole new thing for him.”

When Dalton first won a tournament with scholarship money as a reward, he wondered if he could cash the scholarship checks like currency, Chris Johnson said. Because Dalton hadn’t planned on attending college, the scholarship was essentially not worth the paper it was printed on, his dad said.

But as more tournament wins and scholarship money piled up, the more Dalton decided it would be a waste not to set the hook on the opportunity.

“I was like, ‘OK, I’m a sophomore. I might as well start thinking about going to college somewhere,’” Dalton said.

That was like the roar of a 200-horsepower motor to his parents’ ears. They know he’s a hard worker — Dalton works two jobs now — and still would have gotten a decent job after high school. But they also believe attending NTI will set Dalton up for a lifetime career.

If he doesn’t become a professional fisherman first.

Luci Johnson said her son has made her a proud mom.

“It’s overwhelming to see his talent at such a young age,” she said. “We tell him the world is in his hands and he can do with it what he wants. He’s got so much talent and such skill, and he goes out there and flies by the seat of his pants. He doesn’t have a plan and still does well.

“And he’s fine if he loses and says, ‘You know what, I’m a winner because I showed up.’”

Mike Capshaw can be reached at mcapshaw@nwadg.com or on Twitter @NWACappy.

Print Headline: Quite a catch