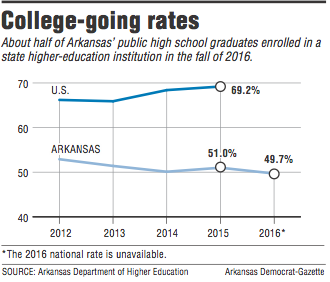 About half of the 30,152 students who graduated from the state's public high schools enrolled in an Arkansas public college or university, according to department data.

That percentage, called the college-going rate, has trailed the nation's -- about two of every three graduating high school seniors continue on to college, data show -- for the past four years with the nationwide rate increase starting in fall 2014, and Arkansas' rate decreasing that same year.

"The [nation's] college-going rate has gone up considerably over the past 50 years, but so has the demand for people with college degrees," said Thomas Harnisch, the director of state relations and policy analysis at the Washington, D.C.-based American Association of State Colleges and Universities. "Stubborn gaps still remain based on income: students from wealthier backgrounds are much more likely to immediately transfer into college. Income gaps ... [have] been there for a while, and it's something that policymakers really need to address."

The college-going rate is the first sign of students' access to higher education, though only typically for students starting college in the fall after graduating from a high school in the spring. Access is one in a trifecta -- along with affordability and success -- that higher education leaders have homed in on to increase the number of residents who hold a college degree.

A better educated workforce will attract more companies and offer Arkansans jobs with higher pay, state officials have long said. And Arkansas has historically fallen behind most other states in the percentage of residents who have degrees.

"The college-going rate is incredibly important as it foreshadows the future of a state's workforce and the vitality of a state's economy," Harnisch said.

The Higher Education Department report measures Arkansans who graduate from public schools -- not private or homeschooled students -- and who go to higher education institutions -- public, private and independent -- within the state. The state does not track students who go to colleges or universities out of state.

Among the different races and ethnicities, white and Asian students go to college at a higher rate than their peers: at 52.9 percent and 58.7 percent respectively.

The only other group whose college-going rate increased from last year was Asian high school graduates by about six percentage points, data show.

All other race and ethnicities had lower college-going rates from fall 2015 to fall 2016.

Some states, such as Tennessee and Oregon, have tackled the gap by offering free tuition for students attending community colleges, Harnisch said.

"While some of the policy details of those programs are certainly debatable, the message of free college is very powerful, especially for low-income students," he said. "The key is to not complicate it for students."

Arkansas has its own version called the Arkansas Future Grant, covering tuition and mandatory fees. The grants are "last dollar," meaning students must use federal and other state aid before being eligible for them.

In the last few years, the state has created a higher-education master plan, in part seeking to raise the college-going rate of all student groups to 55 percent and raise the rates for underserved students to equal those of other students.

Schools have started efforts to bring in more underserved groups, which have typically been black and Hispanic students, state leaders have said.

As an example, Arkansas Tech University in Russellville began distributing "How to Go to College" flyers and posters in English and Spanish in the state's high schools, said its spokesman Sam Strasner. The state's third largest university has also used its students groups, including the Hispanic Student Association and the African American Student Association, to bring programs supporting cultural awareness to the campus, he said.

And in 2015, the school started an Office of Diversity and Inclusion to provide an additional academic resource to aid in the retention and graduation of students from underrepresented populations, he added.

The Western Interstate Commission for Higher Education is expecting the state's next largest group of high school graduates in 2024-25, an increase of 9.5 percent. The group -- similar to the Southern Regional Education Board -- has produced high school graduate projections for its member states for decades and has recently started doing state profiles for the nation, said Peace Bransberger, a senior research analyst there.

The projections come from birth trends from the U.S. Census Bureau, she said, adding that 2007 was a high point in the nation. After the recession, birth rates have stabilized but not increased, leading to a projection of all regions in the nation falling after 2025, she said.

While that may not affect the college-going rate, Harnisch said, it would change the number of students.

"As the pool of students is more restricted each year, certainly it's going to present some challenges," he said. "Certainly it presents some challenges to colleges who are in competition with each other for these students, and so they have to be creative and find competitive advantages in the college marketplace. In other parts of the country, it will be imperative that [colleges and universities] have enough funding to serve the growing numbers of students."