GLENWOOD -- A sawmill has reopened in Glenwood nearly seven years after being shuttered, providing an economic boost to a town of 2,500 hard on the banks of the Caddo River and nestled in a valley of the Ouachita Mountains.

When word of the mill's imminent reopening spread a year ago, Caddo River Forest Products received more than 300 applications for the first 100 jobs, Brett Bray, the plant's general manager, said recently. "This is a boon not just for Glenwood and Pike County but for towns in three neighboring counties."

The owners and employees of Caddo River Forest Products are scheduled to meet Gov. Asa Hutchinson and various town, county and economic development leaders and elected officials in a ceremony at the plant today.

With a skeleton crew of supervisors and maintenance workers, the sawmill actually "powered up" on May 15 and, within a few hours, produced its first lumber since 2010, Bray said.

"I really expected a much harder start-up for a mill that had been closed for so long," Bray said. "We went through things we knew had to be fixed, and we decided just to wait and see what happened at start-up. All things considered, it went very smoothly."

Logging trucks have been arriving at the sawmill for weeks, each depositing 29.2 tons of yellow pine. Some 12,000 tons of logs are ready for production at the mill's 111 acres, Bray said.

The mill has hired 103 workers so far, for 10-hour shifts four days a week. A second shift will be added next spring, increasing employment to about 150, with more hires coming as needed, Bray said. The company believes another 300 jobs will be created in supporting industries, such as trucking.

Annual payroll is estimated at $4 million. When company officials announced their plans a year ago, they said $50 million would be invested.

Bray, a 28-year veteran of the timber and logging industry, put the average wage at $16 an hour. "Skilled craftsmen" -- the millwrights, electricians and those who keep the saws sharp -- "make very competitive wages, and that's all I can say about that," he said.

The mill's top 10 supervisors average 32 years of experience in the industry, Bray said, and he brought two of them out of retirement.

"One of the best days of my life," Jim Tweedle, a Glenwood native and one of those former retirees, said of getting a telephone call about going back to work.

Tweedle started working at the mill after it was built by Georgia-Pacific Corp. in 1974, and he stayed there through the 26 years, from 1984 to 2010, when it was owned by a pioneer family of Pike County, the Beans. The Curt Bean Lumber Co. closed in November 2010, partly because of the recession and its effect on housing construction.

Tweedle was among 200 workers who lost their jobs at what had been the town's largest employer.

"I like this much better than retirement," Tweedle, now the supervisor of the drying and shipping portions of the mill, said.

Growth in Glenwood came to a halt after Bean closed its doors and filed for bankruptcy in late 2010, Tweedle said. "We certainly didn't see the growth we had been seeing for 10 years," he said.

While some of his co-workers moved away, many others commuted to jobs in Arkadelphia and Hot Springs, Tweedle said.

Richard Scott of Norman in Montgomery County, about a dozen miles north of Glenwood, worked at the sawmill from 1980 until its closing. For several years, he commuted to a job in Mansfield in Sebastian County -- a drive of 1½ hours, one way, every day.

Like Tweedle, Scott was hired in early 2016 to help restart the mill. "You could feel the excitement in town," he said. "With it closed for so long, people just didn't think it would be cranked back up again."

Tweedle and Scott credit the Caddo River -- with its always-popular canoe and kayak rentals, campgrounds and cabins -- with keeping the town alive.

Downtown Glenwood -- a three-block stretch lining both sides of Broadway, the town's main drag -- is about a mile south of the mill. An empty storefront is hard to find.

Susie Cantrell is an expert on the comings and goings on Broadway: She was born there, in a doctor's office in the back of the still-standing Woodard's Drug Store. She can tick off a list of businesses that have opened on Broadway the past couple of years, including the Bainum Library and Learning Center, Angel's Attic & Flea Market, the Le Cig Vaping Lounge, and Master's Touch Graphics.

There's plenty of foot traffic, too, in and out of Plyler's Home Center and Wright's supermarket, which have been two of Glenwood's business anchors for decades.

City Cafe reopened just three weeks ago, in part because of the sawmill's rebirth, said Cantrell, the cafe's manager and chief cook and the owner of the building that houses the business.

Cantrell owned and operated the cafe from 2004-12.

The closing of Bean Lumber "hurt us tremendously," she said. "It had a horrible impact on the economy, and it trickled on down the food chain, to my cafe, to the grocery stores, to the gas stations, to the insurance agents."

While Bean's closing hurt, it was an illness in the family that forced her to shut down the cafe for several years, she said. The mill's revival, though, played a part in its reopening, she said, hoping a $7.99 buffet is attractive to sawmill workers with 30-minute lunch breaks.

A few doors down, Debbie Herrell attends to business at Billy's House of Guitars & Musical Museum, an eclectic place that is as much a museum as it is a retail store. Her late husband, Billy Herrell, opened the shop on Broadway in 1995, after a couple of decades of collecting and buying, and he built a recording studio, too.

Herrell died in January 2014 after a short illness, at age 56. Debbie Herrell struggled with whether to take over the business.

The sawmill's closing hurt every business in town, she said recently. Rumors of its revival circulated for years, only to be shot down, she recalled. "It's nice to have a little good news in Glenwood," she said.

The effort to reopen the mill began more than three years ago, and the project is eligible for various economic development incentives from the state. Those incentives include about $400,000 in sales-tax rebates and $800,000 in rebates regarding payroll, once certain job-creation goals are met.

Federal grants will go to reopening a long-defunct stretch of a short-line railroad that served the mill and other timber-related industries for decades.

Bray said the new company has spent millions on new equipment, including a laser that scans every log, grades it and determines its best cut and use, and on repairing what could be fixed. "Old sawmill equipment left behind like this is basically steel and rusted chains," he said. "You can replace it for $100,000 or fix it for $60,000."

Bray said Caddo River Forest Products will work hard at being part of the community.

"We want our name on the scoreboards at the baseball fields and on the back of kids' jerseys," he said. "One of our goals was to bring the [former] Bean employees back home. We've done that. Now, if they're happy at home, they're going to be happy at the mill." 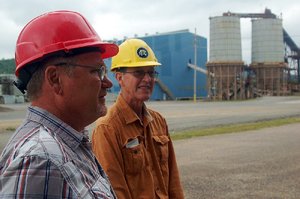