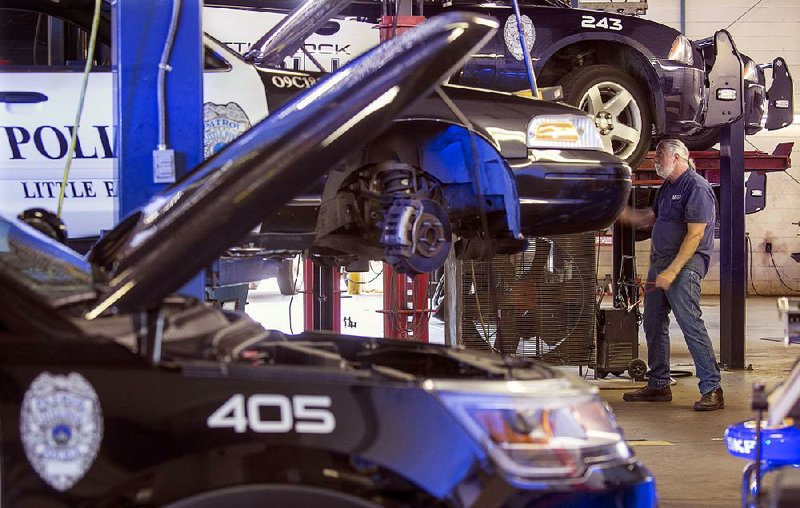 Little Rock's city manager has recommended spending about $10.5 million to update the city's police vehicle fleet over the next five years, a move that officials say would decrease maintenance costs and extend the life span of the vehicles.

In a memo this week from City Manager Bruce Moore to elected leaders, Moore recommended that the city purchase 255 police vehicles over the next five years. The plan would allow the city to replace most police vehicles that have surpassed 100,000 miles, according to the memo.

In the memo, Moore said police vehicle purchases over the past several years did not keep pace with the number taken out of service. Little Rock retired 446 sedans, pickups and SUVs from 2000-16, according to the memo. But in that same time period, the city purchased only 357, the memo said.

Moore did not have a specific number on how much money the city would save under the plan but said the savings would help Little Rock purchase new vehicles for the department.

"I think it will have a very positive impact for the department," he said. "I believe we have to give our officers the best tools to do their jobs."

The five-year vehicle replacement plan would cost $10,473,934, according to the memo. The city would purchase mainly Ford Explorers and Ford Tauruses.

A short-term loan would pay for the vehicles bought in 2017 and 2018, according to the memo, and the city should establish a Replacement Fund to pay for the 2019-21 purchases.

Through a spokesman, Moore said the city's Board of Directors does not have to approve the replacement plan, but board approval is required for the funding to carry it out. The plan has yet to be placed on the board's calendar for consideration.

The city would buy 60 vehicles this year and another 60 in 2018, under the plan outlined in the memo. After that, the city would buy 45 vehicles each year from 2019-21, according to the memo. Of the 255 police vehicles, 68 are expected to be unmarked.

The replacement plan would cover 362 of the department's sedans, pickups and SUVs. The department has 431 over-the-road vehicles, but 48 are "special-use" vehicles and 21 were being retired during the time frame mentioned in Moore's memo.

The replacement plan comes after the Little Rock Fraternal Order of Police drew attention to the condition of police vehicles. In 2015, the union released a report from an outside consultant that said the city's Fleet Services Department was inefficient, according to reports. The outside consultant was paid by the union to produce the report.

Fraternal Order of Police President John Gilchrist said the replacement plan is a good start, and he is encouraged to hear about the number of vehicles the city plans to replace.

"It's certainly the right thing to do, and we are heading in the right direction," he said.

However, he said the plan does not address how the city should replace police vehicles that are wrecked while on the job.

When a wrecked police vehicle is determined to be a complete loss, he said, the insurance money is not used to buy a replacement vehicle for the department.

"And that's one of the reasons we're in a shortfall right now," he said.

Willie Hinton, director of the city's Fleet Services Department, said the city does not have the money to replace a wrecked vehicle.

That is something that should be addressed going forward, he said.

Officers "are going to tear up some vehicles during the year because that's the nature of their job," he said.

After the last economic recession, Moore said the city got behind in replacing its police vehicles -- something he has seen in other U.S. cities during that same time. Little Rock's police fleet suffered from that, but the damage was not as bad as in some areas, where cities had to close fire stations and lay off police officers, he said.

Among the other U.S. cities that have faced challenges maintaining their aging police fleets is Lorain, Ohio. The Fraternal Order of Police there has reportedly filed grievances over the Police Department's fleet, arguing that the aging vehicles amount to unsafe working conditions for officers.

It can be difficult for larger cities to update their police vehicle fleets, Gilchrist said, because the cost can run into the millions. Fleet upgrades in small towns can be tough because of the towns' limited taxpayer base.

Not replacing vehicles that have surpassed 100,000 miles results in more maintenance and downtime, along with higher fuel costs per mile, according to the memo.

The Police Department has a number of vehicles for which maintenance costs have surpassed their original sticker price, according to the memo.

According to the memo, the Police Department has 80 vehicles in rotation 24 hours a day, seven days a week. Those vehicles -- known as "hot-seated" because of their constant use -- rack up the miles, Moore said in the memo. As an example, he referred to a 2015 Ford Explorer that traveled 44,161 miles within 17 months of service.

The replacement plan would add enough vehicles to the fleet so that each would be used for only one shift a day instead of 24/7, according to the memo.

Moore's memo said that would extend the life span of a vehicle from two to three years to four or five years, and reduce the number of miles it is driven by about 66 percent.

Officers use patrol vehicles as their offices during their shifts, and a worn-out vehicle can become a safety issue, Gilchrist said. On one level, a poorly performing vehicle becomes a morale issue for the whole department, he said.

Police Chief Kenton Buckner said the added vehicles would be a big morale booster in the department. He said he was once again glad to see city leaders make public safety a priority, this time by providing a way to update the police fleet.