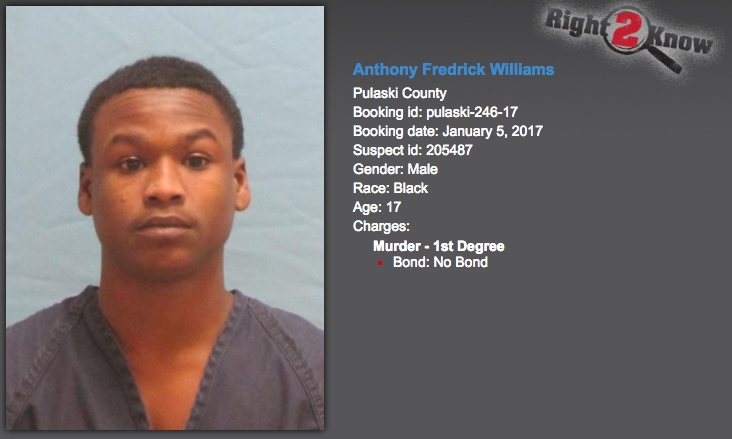 The mother of a teenage murder suspect told a Pulaski County Circuit judge that she does not remember talking about the killing with her 17-year-old son.

Citing an interview with the teen after his arrest, North Little Rock Detective Dane Pedersen told Pulaski County Circuit Judge Herb Wright that Williams' mother picked him up from the area and drove him home after the shooting.

The detective testified Tuesday that Williams also told police that he discussed what he had done and why with his parents.

"He did tell me that he talked to his mother and dad about what happened and they talked about it all day," Pedersen said.

But when Pedersen arrested Williams at the family home about two weeks after Barnett was killed, the boy's parents told him they didn't know why their son was being arrested, the detective said.

Williams is petitioning the judge to transfer his first-degree murder case to juvenile court, where his family and supporters say he can access the rehabilitative programs he needs to address problems with substance abuse and emotional issues.

Wright is considering the request and said after Tuesday's juvenile-transfer hearing that he will decide in the coming days.

Natilie Nicole Johnson, 38, of Little Rock told the judge that she and her husband only learned their son is accused of murder when police arrested him on Jan. 5.

Prosecutors asked Johnson three separate times whether her son had told her he had shot someone. Each time, Johnson said she doesn't remember him talking about that.

"I don't recall him telling us," Johnson testified.

Williams has been in juvenile court since he was 14, with convictions for aggravated assault, drug possession, disorderly conduct, marijuana possession and handgun possession, according to testimony.

He once ran away from home and was gone for an entire year, the judge was told.

Williams could be rehabilitated in juvenile court, if he's in the proper environment with the necessary counseling and drug treatment, defense attorney Willard Proctor told the judge.

The teen could even be sentenced to prison if the courts determine he hasn't been rehabilitated by the time he turns 21, Proctor said.

Williams has had success at structured programs, such as the National Guard C-Step boot camp, the attorney said.

The teen has been diagnosed with a mild mental disability and has had emotional difficulties, which have manifested as suicide attempts and efforts to harm himself. His third-grade reading level and 63 IQ -- 100 is average -- have prevented him from being successful at prior court-ordered rehabilitative attempts, Proctor said.

Deputy prosecutor Martinque Parker argued that the teen's criminal record, which shows he's picked up new charges every year since 2014, indicate a pattern of escalating behavior.

She questioned whether Williams' parents, who say they've done all they can for him already, can do anything to keep him out of further trouble now that he's been charged with murder.

Pedersen told the judge that the fatal encounter between Williams and Barnett at the Eastgate Terrace apartments on East 19th Street in North Little Rock occurred after a fight between Barnett's current and former girlfriends. Barnett broke up the fight, but Williams said something to Barnett that led to a fist fight between them.

Police say Barnett, after winning the fight, was about to get into a car to leave the area when Williams shot him, then threw the pistol into the Arkansas River.

"He said he took the worst end of the fight ... and after the fight was over, he took a handgun from his shorts and shot Mr. Barnett," Pedersen testified. "He initially denied [the shooting]."

Along with Williams' confession, police have four witnesses who saw Williams shoot Barnett and another three who saw Williams at the scene but left before shots were fired, the detective said.