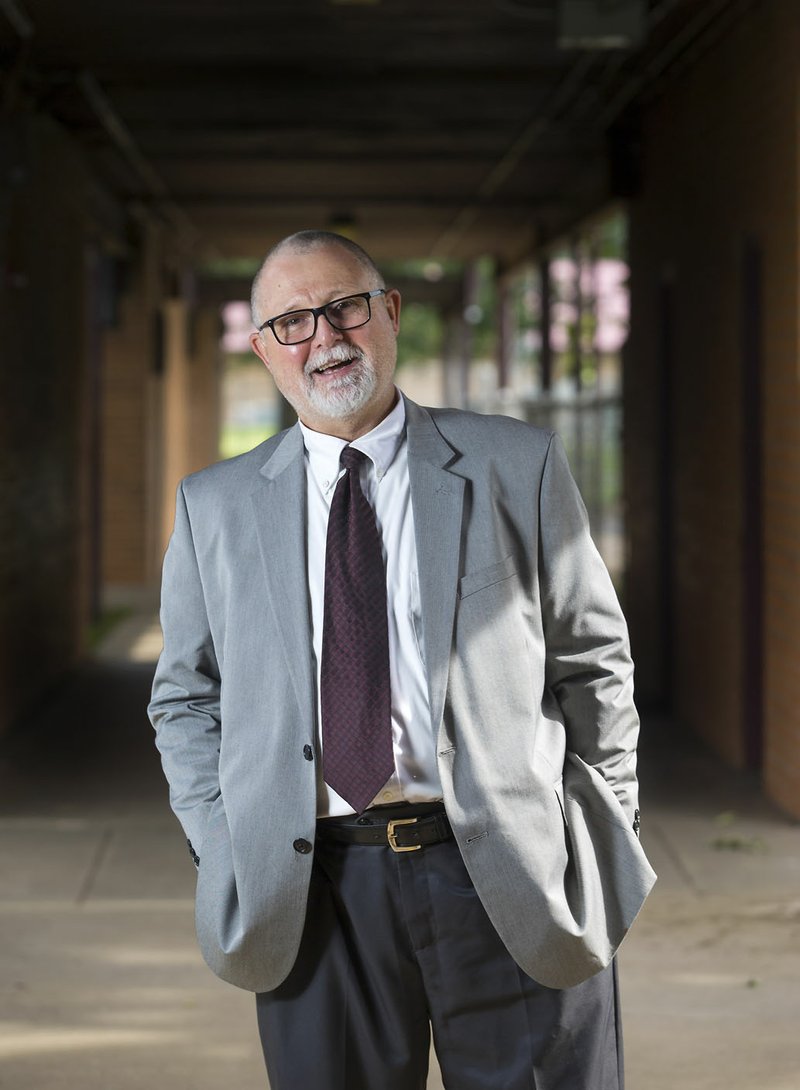 GENTRY -- Randy Barrett refers to himself as part of the "support staff" when he discusses his role as the School District's superintendent.

It's mainly the teachers who carry out the district's mission of educating the students. Everyone else -- from the bus drivers to the superintendent -- is in a supporting role, Barrett said.

Education: Doctorate in educational administration from the University of Arkansas, 1988

Quote: “If you can’t be happy in Gentry, you probably just can’t be a happy person.”

Of the 15 school district superintendents in Northwest Arkansas, here are the ones who have served in their current position the longest:

"I try to be responsible for taking care of the puzzle pieces that allow us to have a good day of school for our kids," he said.

Barrett, 62, has been Gentry's superintendent for 25 years, the second-longest tenure among superintendents in Northwest Arkansas, trailing only Jim Rollins of Springdale. Barrett plans to retire at the end of this month, bringing an end to a 41-year career in education.

He started as Gentry's superintendent in 1992, coming from Dumas, where he'd been a junior high school principal for five years. The School Board hired him on a 3-2 vote, he said. It was his first superintendent job.

Barrett notified the board in November of his intention to retire this summer. In February, the board chose Terrie Metz, the district's federal programs and curriculum coordinator, to take over as superintendent July 1.

The Gentry district consists of four schools with a total of about 1,400 students. Barrett, while reflecting on his time in Gentry, admitted he hasn't been perfect.

"I have made some good decisions, some mediocre ones, and a few that just stunk," he said.

Success at the polls

Barrett did achieve perfection in at least one area: He never lost a millage election.

Voters approved six millage increases during his time. They also agreed to renew one of those increases. The district's millage rate has grown from 27.0 to 46.0 under Barrett's watch, placing Gentry in the top 10 highest rates among the state's 235 school districts.

The latest of those increases came just last year, when voters approved a 3.1-mill increase. That will raise money for, among other things, an addition at the intermediate school and a career and technical education building.

"First you have to have a real need," Barrett said. "And then you have to be able to communicate that need to the voters."

It also helps to be honest and transparent and make sure the public understands what a proposed tax increase will cost them, he said.

Gentry raises about $171,000 from 1 mill. Some other districts, like Bentonville and Rogers, collect about 10 times that amount.

There's still a significant salary gap, however, between Gentry and some neighboring districts. The minimum teacher salary in Bentonville, for example, was $44,708 this past school year.

"I want our staff to be comparable in terms of what they earn to everyone else," he said.

One of the low points of Barrett's career was when the state put Gentry on its "fiscal distress" list in 2008.

The anticipation of an enrollment surge convinced him the district should build more classrooms. Those additional students he had expected never actually came, causing the district to get behind in its finances, he said.

"Will I forever feel ashamed for letting us do that? Absolutely. Absolutely. That will be a permanent memory," Barrett said.

Fiscal distress is like a "badge of shame," he said.

"Your community, because they don't know all of the ins and outs, it gives them a chance to start doubting you. It's an embarrassment to your school board," Barrett said.

Gentry remained in fiscal distress for 18 months while the district made some changes. A 3-mill tax increase, approved in 2007, certainly helped the bottom line. The district also cut positions and required its coaches to obtain commercial driver's licenses that enabled them to take athletes on local trips.

First-year superintendents in Arkansas must complete a mentoring program. Barrett served as a mentor to Jeff Gravette, Decatur's superintendent, and Debbie Jones, whom the Bentonville School Board hired as its superintendent last summer.

Barrett is a "fabulous" man, Jones said. He helped her understand the importance of seeing the perspectives of a variety of people, which helps a lot in the superintendent's job, she said.

"He understands that when parents are really upset, they're really just watching out for their children. That's probably the greatest lesson I took from him," Jones said.

He also celebrated her successes. After the Bentonville and Rogers school districts both won their respective millage elections last month, he sent a congratulatory email to Jones and Rogers Superintendent Marlin Berry.

Ken Ramey, superintendent of the Siloam Springs School District, said he and Barrett have worked well together over the years.

"He's been a great mentor to me, a great ambassador for Gentry schools," Ramey said. "Randy is a very insightful person, very reflective. He gives really good, solid advice. I can't tell you how much support I had from him when we had our school bus wreck."

That wreck occurred May 19, 2003, during Ramey's first year on the job. A Siloam Springs school bus ran off the highway, turned over and crashed into some trees, killing a 14-year-old student and injuring several others.

The average tenure of a school district superintendent nationally is about six years, according to Richard Abernathy, executive director of the Arkansas Association of Educational Administrators.

"To juggle all the different aspects of that is difficult. It's stressful," Abernathy said.

There may be some superintendents who allow complacency to set in after being on the job too long, but Abernathy said he's seen new superintendents get complacent as well. Barrett, he said, has never been that way.

Charles Cudney is director of the Northwest Arkansas Education Service Cooperative, based in Farmington. The cooperative's board of directors is made up of superintendents in the area. Barrett served as the board's chairman two years ago.

Cudney, a former superintendent, said it's a "huge accomplishment" to last in a superintendent's job for 25 years like Barrett has.

To be successful in the job, a person must be able to build relationships with all kinds of people, regardless of their views on certain issues, Cudney said.

As long as residents -- no matter what their views -- see decisions are made with the best interest of students in mind, they'll respect that, he said.

A few people have worked in the Gentry Public Schools central office for most or all of Barrett's time there. Tamhra Shawver, district treasurer, has worked for the district since 1986.

"He's not only been my boss, he's been a very good friend," Shawver said. "Our office here is a family. It's not just a place to go to work."

Barrett uses "family" to describe his employees as well. Some of them literally are family members. His son Jason Barrett is the district's transportation and maintenance supervisor. His wife, Regenia, is an early childhood reading intervention teacher; she plans to work at least another year, her 27th in the district.

Randy Barrett said he was not involved in hiring either his wife or his son.

Barrett isn't certain what he'll do in retirement, other than work on his golf game, perhaps. He said he told Regenia he'd probably get up each morning to make her breakfast, then go back to bed.