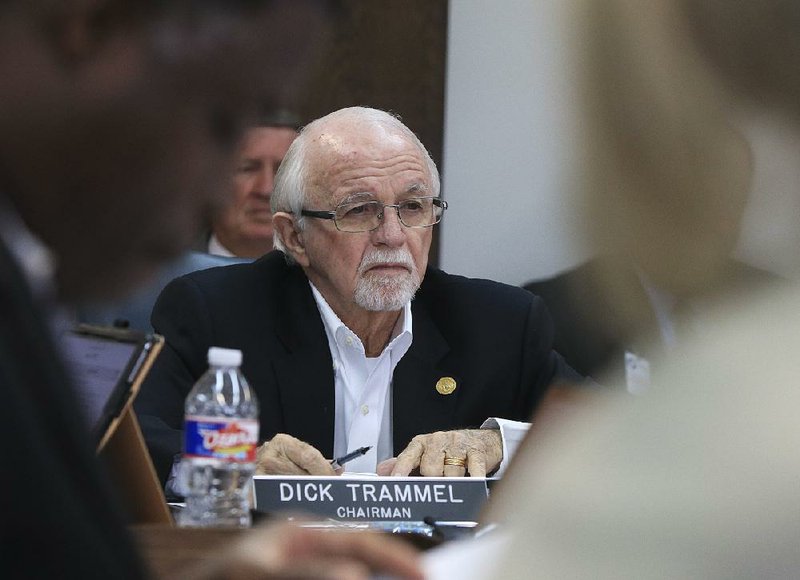 Arkansas Highway Commission Chairman Dick Trammel on Wednesday called the decision to pursue a ballot initiative “a step to have better highways in Arkansas.” ( Staton Breidenthal)

The Arkansas Highway Commission said Wednesday that it would pursue a ballot initiative for the 2018 general election that would raise up to $400 million annually for road construction. 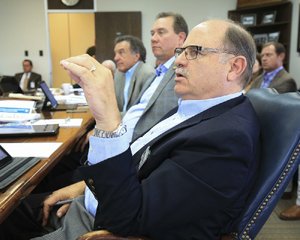 Photo by Staton Breidenthal
Arkansas Highway Commission member Philip Taldo (front) asks a question Wednesday along with fellow Commissioners Alec Farmer (center) and Robert Moore Jr. during a meeting in Little Rock. All voted to seek a ballot initiative in 2018 to raise up to $400 million a year for road projects.

Questions about the initiative -- whether it will be an initiated act or a constitutional amendment, the proposed source or sources for its funding and the total amount it would raise -- will be answered over the next several months by commission members, road construction contractors and other groups promoting better roads.

The commission's decision came on a unanimous 5-0 vote and constitutes Plan B after the commission and its allies failed to persuade lawmakers in recent legislative sessions to support new taxes to address the Arkansas Highway and Transportation Department's long-term funding woes in which maintenance needs are outstripping the ability to pay for them.

"We proved we can't do it through the legislative process so far with the political situation we're in," said Rep. Dan Douglas, R-Bentonville, who attended Wednesday's meeting. "It's got to be a ballot initiative."

Scott Bennett, the director of the Highway Department, pushed the commission to make a decision Wednesday, citing the work and deadlines backers of the initiative must meet in order for it to be on the ballot for the Nov. 6, 2018, general election.

The commission didn't need much of a push. Chairman Dick Trammel of Rogers and members Tom Schueck of Little Rock, Robert Moore Jr. of Arkansas City, Alec Farmer of Jonesboro and Philip Taldo of Springdale voted quickly and with no debate to pursue either an initiated act or a proposed constitutional amendment.

"The department and the commission and our partners have taken a step to have better highways in Arkansas and give the people of Arkansas a chance to vote and express their wants for highways," Trammel said after the vote.

But much work remains to agree on the level of funding and to fashion a ballot initiative, gather the signatures and raise money to finance the effort, Bennett said. Making the decision on Wednesday also gives the commission and its allies time to back out of the effort, he said.

"We have to try to develop the measure that is the right one," Bennett said. "And the right one is, partly, the one we believe would pass. And we don't know what that is yet."

A timeline Bennett provided the commission called for reaching a decision on the details of the proposal by October. It would need to submit ballot language to the attorney general's office by January, and would have until July 2018 to gather signatures.

An initiated act requires 68,000 signatures of registered voters to be placed on the ballot.

Jim Wooten, the chairman of the Arkansas Good Roads Foundation, estimated the cost of gathering enough signatures at between $1 million and $1.3 million, money that would have to be raised from private sources.

Getting the commission and its allies to agree on a funding source or a combination of funding sources for highway construction won't be easy, judging by comments from them Wednesday.

Shannon Newton, president of the Arkansas Trucking Association, said her organization's preferred option is raising the taxes on motor fuels. In Arkansas, the state tax on gasoline is 21.5 cents per gallon; for diesel, it's 22.5 cents per gallon.

"All of that is much more straightforward, simple and easy to collect and we stand ready to contribute our part on that and the other pieces where it makes sense," she said.

Each penny of fuel tax equates to $14 million in funding for the Highway Department. A 14.2-cent increase in fuel taxes would be needed to raise $200 million annually, according to the department, and 28.4 cents to raise $400 million.

In an interview, Trammel expressed reluctance to raising taxes on fuel.

"I'm not sure the people would vote for a gasoline tax," he said.

Wooten and Douglas said they preferred a proposal similar to the one the General Assembly rejected earlier this year: It would have asked voters to consider approving a bond issue financed by a 6.5 percent sales tax on wholesale fuel prices. The statewide tax would have raised an estimated $200 million annually.

Douglas said a long-standing proposal to steer revenue from state sales taxes on new and used vehicles and other road-user items, such as tires and batteries, is a nonstarter.

Although some legislative and gubernatorial panels have endorsed it in the recent past, it has sparked furious opposition from other segments of government that rely on general sales taxes, including education, social services and prisons.

Another factor, he said, is a legislative panel studying an overhaul of the state's tax code as part of an effort to reduce the state income tax. It met for the first time Wednesday.

"I don't know how the governor's office is going to feel about it because the big initiative right now ... is to try to figure out how to make the tax code more efficient to where we can cut income taxes," Douglas said. "You can't do that and have a revenue transfer. You can't do everything."

Phasing the revenue transfer in over five years to help protect other parts of government would raise more than $500 million annually for the department by 2024.

"I think the voters will support this, whether it's a fuel tax increase or a sales tax," Douglas said. "Of course, they will easily support the revenue transfer because it's not costing them any more. But can you get it through with the fight?"

The ballot initiative also will face other challenges, from tort proposals and other measures on the ballot to the overall economic climate in the next year or so.

"It's easy for all of us to sit in this room and say that it makes sense and that it seems very logical for people to go along with it," Newton said. "But there are a lot of other things going on around us that are not being represented fully in this room so we have to keep in mind that all of those things are going to play into it."

Still, she said, if the effort is being made, it must be worthwhile, suggesting the goal should be an initiative that would raise close to $400 million annually.

"If we decide to do this, that you should go big or elect to wait it out," Newton said. "Because if we are not going to do something that really solves the problem, people are going to be tired of hearing about it. If we're going to mount this huge effort to overcome all the head winds on the issue, I would hope that whatever we get in return for that is worth all of the effort we are going to put in to it."

Douglas and Wooten also said that how the department will spend the money must be available to voters.