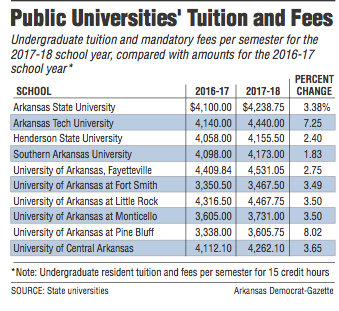 All Arkansas public universities raised tuition and fee rates for the 2017-18 school year, ranging from a low of 1.83 percent at Southern Arkansas University in Magnolia to a high of 8.02 percent at the University of Arkansas at Pine Bluff. Only two schools -- UAPB and Arkansas Tech University in Russellville -- raised rates above 4 percent.

"You kind of expect the cost is going to have to go up," said Rep. Greg Leding, D-Fayetteville. "That seems to be fairly normal even if it is a little disappointing, especially considering how expensive higher education has become.

Colleges and universities typically raise rates 3 percent to 5 percent each year. This year, schools in Arkansas -- like those in most states -- have hovered around the 2 percent to 3 percent range, said Dustin Weeden, senior policy specialist at the National Conference of State Legislatures.

"It seems like it hasn't been that big of an issue this year," he said. "It does seem like the increases that are coming out are very reasonable, apparently close to inflation."

Large tuition and fee increases are usually because of "pretty significant decreases" in state funding, Weeden said. In the past, moderate increases have been a function of states being able to invest more in higher education, he said.

"This year, institutions are a little bit more cautious," he said. "I think institutions aren't able to get away with large increases right now. The pressure from families, students and policymakers are pretty significant because of affordability concerns. Institutions are responding to the financial realities of families and students."

In Arkansas, state funding for public colleges and universities has remained flat for the better part of a decade while operating costs continue to increase. Higher education institutions mainly get money from tuition and fee revenue and state appropriations, while a smaller portion comes from private donations.

"Tuition and fees tend to make up for flat funding," said Tara Smith, deputy director of the state Department of Higher Education. "If costs go up by 1 percent, tuition will have to go up 2 percent because it has to make up for the other source of funding that remains flat."

Costs also increase every year, usually by 1 percent to 3 percent in recent years, she said. Salaries make up the bulk of costs, but then there are also fringe benefits, including health care, utilities and supplies.

"For our faculty salaries at public universities, Arkansas, we are at the bottom," Smith said, comparing the state's average salaries with peers in the 16-state member Southern Regional Education Board, which reported the 2015 figures in February 2016. "The increases that institutions have been able to provide for faculty have been very limited."

That's coupled with the fact many public universities have been underfunded for years through an enrollment-based funding model, she said. The department recommended the state give higher education institutions $759 million -- just to bring the amount to 75 percent of what the schools were originally supposed to receive -- but public colleges, universities and technical colleges are projected to receive $622.7 million, she said.

The state is preparing to switch its funding method to one that is less based on enrollment and more on outcomes, or student retention and graduation. The new method, which takes effect July 1, 2018, will focus on access, success and affordability for students.

Leding, the state representative, said he would like to think that Arkansas' colleges and universities heard the "noise" about student debt in the past couple of years. He led a study on student debt in Arkansas earlier this year, finding that 55 percent of graduates leave with debt, which in 2015 averaged about $25,000 per student, he said.

"I think that's just something legislators need to be aware of and keep that in mind when they think about how much funding higher ed needs to receive and not think any time a campus jacks up its rate that it's solely because institutions can't keep their finances in order," he said, adding that it's no longer realistic for students to work enough hours to cover costs of higher education and maintain passing grades. "Everybody has a stake.

"For one thing, when it comes to campuses, there's an arms race to build bigger and better buildings to bring in students" -- which, he said, is OK when there is a direct connection to the infrastructure and quality of education.

"There's that, but then also more parents and students need ... better financial literacy when it comes to understanding what borrowing X amount really means and that students aren't really borrowing to support a lifestyle."

On Thursday, the ASU System board unanimously approved the 3.4 percent increase of tuition and fees for the Jonesboro campus, but not without some trepidation.

"It's a problem for some," Trustee Stacy Crawford of Jonesboro said of the proposed increase. "But you get what you pay for. It's something we need to do."

Trustee Tim Langford of Little Rock said that despite "flak" the board received from "journalists and opinion-makers" about the rate increase, he "felt good about it."

"We've been good stewards with our funds," Langford said.

Tuition and fee revenue makes up half the ASU System budget, ASU System President Chuck Welch said. He added that 54 percent of the students who attend ASU will not pay the "sticker price," or full fees of attending college, because they may receive federal Pell grants, which are reserved for low-income students and do not need to be repaid, institutional or Arkansas Lottery scholarships, or private assistance to help offset costs.

"Not every student is paying 100 percent," he said.