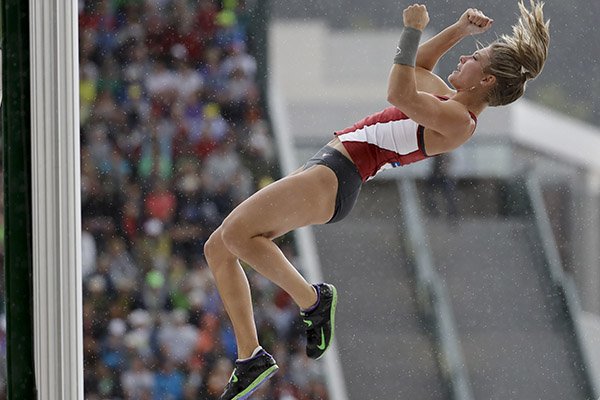 EUGENE, Ore. -- Defending champion Arkansas had a productive first day at the NCAA Outdoor Championships, but the Oregon Ducks are poised to win their first women's title in track and field.

Oregon didn't score through six events, but it qualified a flock of athletes at Hayward Field on Thursday.

Coach Lance Harter said the second-ranked Razorbacks are not in position to repeat last year's feat.

"Oh, that would be a long shot," Harter said. "Oregon has got a phenomenal team, and I've been their greatest fan all year, just with the amount of depth that they have, kind of like what we had last year.

"We thought if we could make a top-five team, then we had a phenomenal season. We're on cue for that. We've just got to make sure that those bullets that do fire (in Saturday's finals) hit the target."

Weeks' twin sister, Tori, placed sixth at 14-5¼ and sophomore Desiree Freier tied for eighth at 13-7¼ to account for all of the Razorbacks' points.

Senior Daina Harper got Arkansas off to a strong start, running the third leg on the 4x100 relay that lowered the school record for a fourth time this spring to 43.34 seconds. The Razorbacks were second in their heat but third overall among the finalists.

"We have really good chemistry as a team and we work really hard," Harper said. "We're really excited to see what we can do on Saturday."

Harper also qualified in her specialty, the 400, after cruising home second in the third heat in 51.92. That put her sixth in a fast field led by Chrisann Gordon of Texas at 50.39.

"My whole goal for outdoor was to go 50-point and I have the competitors to do that, so that will definitely be my goal," Harper said. "Top three, of course, but why not go for the win, so that's the goal."

Nikki Hiltz, a redshirt junior who transferred from Oregon two years ago, posted a personal best of 4:10.80 in her return to Eugene to finish second in the faster heat of the 1,500.

"I wasn't concerned," Hiltz said. "It was honestly fun coming down the homestretch, because we were all kicking and working hard, and it was cool to have that many people around me.

"This is a really good field and I'm excited."

Hiltz, from Santa Cruz, Calif., said it didn't take long for her to feel at home on her former track.

"It's weird at first, but I love Hayward and I love the fans," Hiltz said. "I don't think the fans or the magic is reserved just for the Ducks, I think it's for everyone and I loved it."

The Razorbacks also missed in the 100 as sophomore Kiara Parker and freshman Jada Baylark were sixth (11.50) and eighth (11.61), respectively, in the first of three heats. Sophomore Damajahnee Birch was fifth in her heat of the 400 hurdles in 58.56.

Collegiate record-holder Lindon Victor of Texas A&M repeated as national champion with 8,390 points. The Aggies led the men's team race with 31.5 points, with Virginia second with 20, and Florida and Georgia tied for third with 18 each.