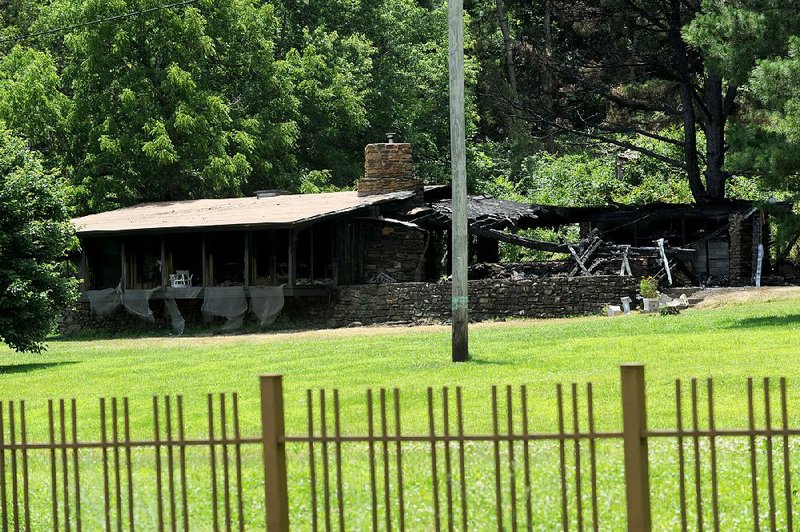 A fire early Thursday heavily damaged this Fay Jones-designed house at 6725 E. Huntsville Road in Fayetteville, where former President Bill Clinton lived from 1973 to 1975 while teaching at the University of Arkansas. ( NWA Democrat-Gazette / Andy Shupe) 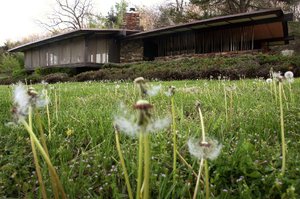 Photo by Democrat-Gazette file photo
The outside of a Fay Jones-designed house in Fayetteville on April 16, 2008. The house was extensively damaged by fire late Wednesday and early Thursday. 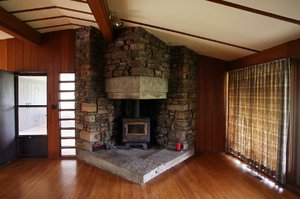 Photo by Democrat-Gazette file photo
The living room and fireplace in April 2008 inside a Fay Jones-designed house at 6725 E. Huntsville Road.

The former president lived in the one-bedroom house at 6725 Huntsville Road from 1973-75 when he taught law at the University of Arkansas, Fayetteville. He paid $150 a month in rent.

The fire was reported at 12:09 a.m. Thursday. It appeared to start in the carport and sweep through much of the wood and stone structure, said Dale Riggins, administrative assistant at the Fayetteville Fire Department.

"At least two-thirds of the house was damaged by the fire, and I'm sure the smoke and water damage took care of the rest of it," he said.

Porch screens lapped out of the front of the house Friday, revealing white plastic furniture inside. Signs reading "Private Property, No Trespassing" were posted all along the perimeter fence near Huntsville Road, which is also Arkansas 16.

The house is about 7 miles east of downtown Fayetteville.

The cause of the fire was still under investigation Friday.

The smoke alarm rousted Joe Brodacz and his dog, and they escaped from the burning building, said his son-in-law, Robert Dzur.

Dzur and his wife, Stephanie, own the house. They are UA alumni who live in Albuquerque, N.M.

Robert Dzur said he hasn't seen the charred house but he has seen photographs of the damage.

The house was designed by architect E. Fay Jones of Fayetteville for Adrian and Marie Fletcher. It was built in 1957 and is listed on the National Register of Historic Places.

Jones won the American Institute of Architecture's Gold Medal in 1990. The architecture school at UA is named for him.

If the house is destroyed, that means Fayetteville has 27 Fay Jones houses left, said Catherine Wallack, architectural records archivist for the Special Collections Department at UA.

"It's very significant," she said of losing another house designed by the noted architect. "The craftspeople who worked on them are retiring, so it's nearly impossible to re-create these. It takes a great deal of work."

The Fletcher Residence was featured in the national magazine House Beautiful in March 1960 and won Jones one of his first architectural design awards, a "Homes for Better Living" Award from the American Institute of Architects in 1961, according to the National Register application.

According to Washington County property records, the house and about 8 acres have an estimated market value of $104,700. However, the Dzurs paid $195,000 for the property in 2011.

The Adrian Fletcher house isn't "the" Fayetteville house that comes to mind when most people think of Clinton. Clinton bought a one-bedroom house at 930 California Drive in 1975. Clinton and Hillary Rodham were married in the California Drive house and began their life as a family there.

That building now serves as the Clinton House Museum.

When people take a "Billgrimage" across Arkansas, they usually hit Hope, Hot Springs, Little Rock and Fayetteville -- his birth town, hometown, the city where he served as governor, and the city where he and his wife taught law.

In Fayetteville, the Clinton House Museum may be visitors' only stop. But the Adrian Fletcher house was also significant for the budding politician who ran for Congress in 1974, losing to John Paul Hammerschmidt, a Republican who held the seat for 26 years. But Clinton made a strong showing. He got 48 percent of the vote.

"The house proved to be a godsend of peace and quiet, especially after I started my first campaign," Clinton wrote in his autobiography, My Life.

The house is the second Clinton-significant building to burn in the state over the past few years.

On Christmas Day 2015, a fire damaged the President William Jefferson Clinton Birthplace Home in Hope. It was repaired and reopened in July.

"That was an arson attack," said Aaron Charles, an interpretive guide at the house in Hope. "They never found out who actually did it."