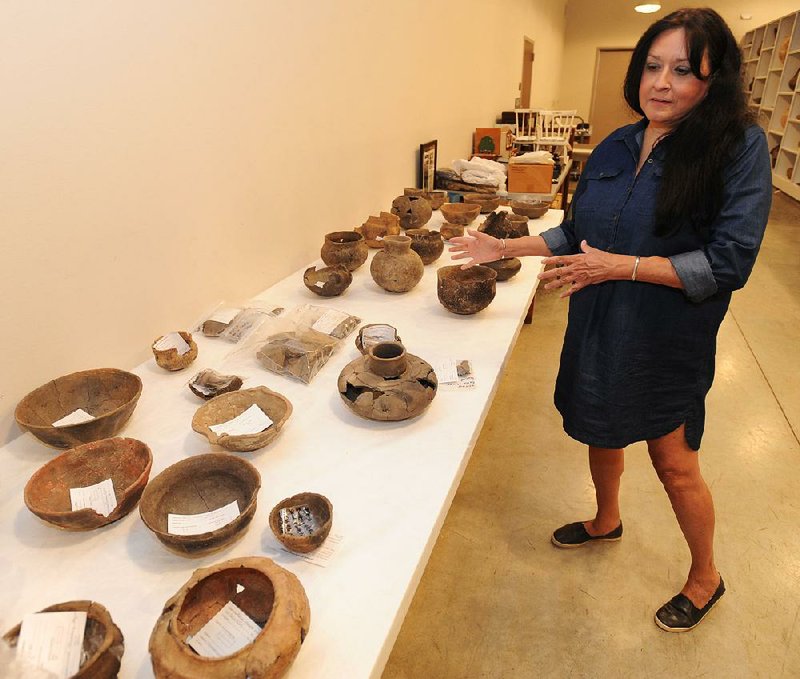 Carrie Wilson, a representative of the Quapaw tribe, speaks Wednesday at the Arkansas Archeological Survey in Fayetteville about a collection of funerary pottery from around the year 1200. The survey has returned items recovered from sites in Arkansas to several tribes, including the Quapaw.

FAYETTEVILLE -- After being unearthed decades ago in various archaeological digs around the state, hundreds of bowls and other objects have been returned in recent months to American Indian tribes by the Arkansas Archeological Survey, said Sarah Shepard, a research assistant with the survey.

Carrie Wilson, a representative of the Quapaw tribe, recently examined several clay pots and bowls of different shapes and sizes uncovered from sites in eastern Arkansas near the Mississippi River.

Some bowls were flecked with shell, evidence of a tempering technique that allowed for thinner designs to hold food and water. This helps date the items to around 1200, Shepard said.

The items would have been underground as part of a common funerary rite, Wilson said.

"We still put food with the dead to help them with their journey," said Wilson, though now it's typically placed at a headstone, she added.

Any human remains and objects associated with burial rites must be returned to tribes upon request under the federal law enacted in 1990 known as the Native American Graves Protection and Repatriation Act.

In general, progress has been slow in taking inventory of museum and other holdings for the purpose of returning items to tribes. But with the help of a federal grant of about $64,000 awarded in 2014, the Arkansas Archeological Survey took on the process of repatriating materials, including some handed over by the University of Memphis.

"We have located and accounted for and reported virtually all of the human remains and associated grave goods in our custody, or we will have by September of this year," said Ann Early, state archaeologist for the survey, which is a unit of the University of Arkansas System.

More than 2,500 objects have been returned by the Arkansas survey since the federal law took effect, said Shepard, who has spent the past several months documenting the characteristics of items and contacting tribes. In addition, human remains of more than 1,500 individuals also have been repatriated, Shepard said.

She said more than 2,000 items have been returned just since the most recent grant award.

So far, tribes have elected to maintain the items in the climate-controlled security of the survey's storage area, which is also shared by the University of Arkansas Museum Collections, Shepard said.

Items have been returned to the Caddo, Osage and Tunica, in addition to the Quapaw, Shepard said.

Early said the federal repatriation law applies to museums and agencies receiving federal funding, with each working independently to take inventory of the items. But she said the Arkansas Archeological Survey and University of Arkansas Museum Collections have the largest holdings statewide of items to be repatriated.

So far, more than 1,250 objects and human remains have been returned by the museum, said Mary Suter, the museum's curator of collections. A federal grant of about $68,000 awarded last year will help to repatriate additional items, Suter said.

"Most of them are from excavations that the university museum sponsored in the '30s," Suter said, with others coming from a 1960s-era dig.

Across the state, collections have been accumulating for more than 60 years, Early said.

"We have people regularly reviewing those collections, item by item, box by box. Hundreds of thousands of things," Early said. Sometimes the survey receives calls from museums outside the state, hoping to gather information about items that may have a connection to Arkansas, she said.

Alex Barker, director of the Museum of Art and Archaeology at the University of Missouri, said the 1990 federal repatriation act improved tribal access to materials.

Before the law, "museums could do as they chose," said Barker, who from 2011-15 served on the Native American Graves Protection and Repatriation Review Committee. The advisory group is appointed, based on nominations from tribes, by the U.S. secretary of the interior.

In practice, "the amount of work has been staggering for museums," said Barker. For some tribes, it has also stretched their capacity to review materials, he added, calling the process "a huge task for everyone concerned."

However, "I think both museums and tribes have been working in good faith for the most part," Barker said.

Wilson said she has worked on behalf of tribes for about 20 years to repatriate items. She's currently the director of those efforts for the Quapaw tribe. She said her heritage includes Quapaw, as well as Eastern Shawnee and Wea.

Looking at some of the intricately designed clay bowls, Wilson said the materials serve as a link to her past.

"I think it's a gift from our ancestors to be able to touch this stuff," Wilson said, pointing out items featuring animal and other effigies. "We don't have other things, so we have these to be able to enjoy and appreciate and learn from."