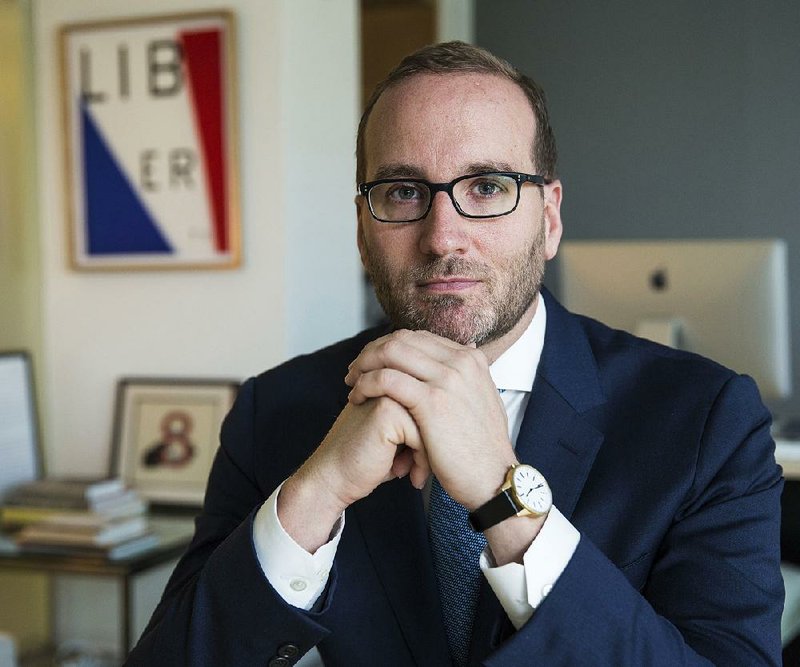 WASHINGTON — He has yet to experience holy matrimony, but when it comes to marriage equality, few Americans have done more to advance the cause than Arkansan Chad Griffin.

Griffin raised the money to pay for the landmark case that struck down California’s constitutional ban on same-sex marriage. He helped recruit the plaintiffs. He hired the lawyers. He managed the public relations campaign, and he helped draft the daily talking points.

He even made sure that they ordered enough American flags so that their rallies would have enough red, white and blue in the photographs.

His role in Hollingsworth v. Perry, the key California lawsuit, catapulted Griffin into the national spotlight. It also helped lead to his selection as president of the Human Rights Campaign, the nation’s largest gay rights group.

Kris Perry, one of the original plaintiffs, says Griffin deserves tremendous credit for her victory. “His name should be on the case. I mean, I wish it were the Griffin case,” she said. “That guy, he did everything.”

In the book Forcing the Spring: Inside the Fight for Marriage Equality, the author, New York Times reporter Jo Becker, credits Griffin with giving history’s arc “a swift shove” toward justice.

But he grew up 50 miles to the northeast in Arkadelphia.

“He was always a curious-minded young fellow. He was one of those that took all of his toys apart. If a door was shut, he wanted to know what was on the other side of it,” says his mother, Betty Hightower. “I classified him as a very strong-willed child. He certainly didn’t like to be told ‘no.’”

The family was fairly religious, attending First Baptist Church on Sunday mornings, Sunday nights and Wednesday nights. “He was real active in his youth group at church. We were Baptists then …. He was involved in student council. He always wanted to be a part of everything,” the mother adds.

Gay rights wasn’t something the family focused on.

“Back then, [neither] he nor I knew much about [Lesbian, Gay, Bisexual and Transgender] people at all,” Hightower says.

“Life really revolved around home, school and church. Those were sort of the three centers of gravity,” Griffin says.

Nobody was out of the closet, Griffin says. “Growing up in a small town in the deep South, I never knew that I knew another LGBT person, so I didn’t have a gay role model to look up to,” he says. “I didn’t come out until my late 20s to my family in Arkansas.”

In high school, Griffin took a girl to prom. He was a photographer for the high school yearbook.

He also found ways to earn extra money. “My first job in life was at Wal-Mart. I was a checker at Wal-Mart and then later worked at the Wal-Mart pharmacy,” he says. “I was lucky enough to be there one day when [Wal-Mart founder] Sam Walton came to visit the store.”

He learned something on the job that stuck with him through the years.

After graduation, Griffin studied for a year in Germany. He then enrolled at Ouachita Baptist University, right there in Arkadelphia. He also volunteered for then-Gov. Bill Clinton’s 1992 presidential campaign, driving to Little Rock every day to work in the operation’s press office.

“I walked into the old [Arkansas] Gazette building and went to the volunteer coordinator, and they said, ‘Do you want to answer phones or open mail?’ And I said, ‘I want to work in the press office.’ I became Dee Dee Myers’ intern.”

Once President George H.W. Bush had been defeated, Griffin headed for Washington, taking a job in the press office. At age 19, he was the youngest Clinton staff member.

Myers, the new presidential press secretary, offered to bring Griffin to the capital if he’d promise to eventually return to school to finish his education. She called Griffin’s anxious mother and told her about the deal they had struck.

Griffin honored his part of the agreement.

“I started the White House on Inauguration Day and ended up being there nearly two years,” he says.

While Clinton was delivering his inaugural address and parading through downtown Washington, Griffin was already busy at work.

“Someone showed us the Oval Office and there was scaffolding in the office,” he says. “They were moving Bush’s desk out and they were moving Clinton’s desk in. That was visually one of the most profound moments in my life, to actually see the transition of power literally and logistically.”

Griffin had only been to Washington once before, on a trip during high school.

Now he was strolling around the West Wing, interacting with some of the most powerful people in the world.

When Clinton returned to Arkansas, Griffin was often part of the presidential entourage.

He was able to walk, literally and figuratively, in the president’s footsteps.

“[I] got to travel the world and fly on Air Force One and Marine One and after my 21st birthday, I left the White House and went to the School of Foreign Service at Georgetown, again where Clinton had gone.

“I landed in Los Angeles after that, for what I thought would be a year and it ended up being 15 years,” he says.

In California, he participated in a number of charitable and political causes and helped to guide actor-director-producer Rob Reiner’s philanthropic group.

He came out as a gay man while he was living in Southern California. He was living there in 2008, when voters narrowly passed Proposition 8, a constitutional amendment that outlawed samesex marriage in the state, stripping away the right to marry that had been won in the courts.

Shortly after the passage of Proposition 8, Griffin decided to challenge the measure in court, launching the American Foundation for Equal Rights, the group that led the legal battle.

The strategy met fierce opposition, not only from Proposition 8’s supporters, but from its opponents as well.

“This was considered an extremely risky and somewhat inconsiderate approach,” Perry recalls.

“There were a number of LGBT lawyers … who had been in the trenches, talking and thinking and doing things in states on this issue for a number of years,” she says. “They had collectively decided ‘No federal challenge. We don’t trust this court. We don’t want to get in front of the Supreme Court. We need a better court.’ And they were being very patient and strategic in that way.”

It wasn’t an approach that appealed to Griffin.

“If patience is a virtue, it’s not a virtue that I possess,” he says.

Those who seek change are “often told just be patient. It’s never been the right time for civil rights advancements in this country. It’s always taken a diverse coalition of people willing to not be patient and willing to push the envelope and willing to demand full equality,” he says.

That attitude frustrated some potential allies.

Griffin, Perry says, has a “down-to-earth, soft-spoken, sweet side, but there’s also a side of him that doesn’t back down. I think once he locks in on a solution and he feels confident he can win, he does not back down.”

Griffin’s mother also saw an independent streak in her son. “He doesn’t seem to be intimidated by anyone. He will speak up to anyone about how he feels and what he thinks. He has the most confidence of anyone I’ve ever known,” Hightower says.

The activist never back-pedaled or apologized, and his gamble paid off.

Proposition 8 was struck down by a federal district judge, the U.S. Court of Appeals and, on June 26, 2013, the U.S. Supreme Court.

Two years later, the rest of the nation’s anti-samesex-marriage laws would be tossed out as well.

In 2012, while Hollingsworth v. Perry was winding its way through the courts, the Human Rights Campaign was looking for its next leader.

“I wasn’t looking for a job. I was sort of living the dream in California and had a business working on issues that I cared about of philanthropy and politics and policy,” Griffin says. “I got a call literally out of the blue asking if I would come meet with the search committee. I’d just bought my house in L.A. and had it furnished. I did not have the intention of moving back to D.C.”

But it ended up being an opportunity he couldn’t pass up. Five years later, it’s a decision he doesn’t regret. 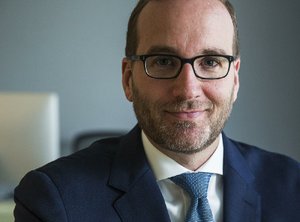 Photo by Special to the Democrat-Gazette/Joshua Roberts Photography LLC
“I think once he locks in on a solution and he feels confident he can win, he does not back down.” — Kris Perry, one of the original plaintiffs in Hollingsworth v. Perry 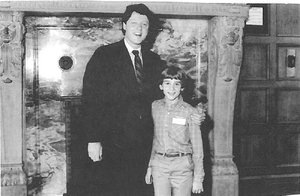 Photo by Special to the Democrat-Gazette
A youthful Chad Griffin poses with former President Bill Clinton when Clinton was governor of Arkansas.
SELF PORTRAIT

THE BEST ADVICE I EVER RECEIVED WAS “Follow your passion and don’t be afraid to take risks.”

WHEN I WAS A KID I was interested in journalism and politics. To me, those were the two areas. I was a political junkie as a kid growing up, I watched the news. I would intern at the Capitol. You know, governor [Bill Clinton] and first lady [Hillary Clinton] were role models to me.

A BOOK I’D RECOMMEND READING IS: Why We Can’t Wait by Martin Luther King Jr. This is a book that everybody should read. I wish I had been assigned that when I was in Arkansas growing up.

ONE OF THE THINGS I’M MOST PROUD OF: The people who have joined our efforts in places like Arkansas and have been willing to tell their stories. Our job is to tell our stories and to change hearts and minds all across this country.

HAPPIEST MOMENT WAS when I became an uncle for the first time.

MY FAVORITE CHARACTER TRAITS IN PEOPLE ARE passion, honesty and loyalty.

THE THINGS I LIKE MOST ABOUT LIVING IN WASHINGTON: weekends, because Trump goes to Mar-a-Lago.

SOME DAY I HOPE TO SEE an end to the abuse and shameful misuse of religion to justify discrimination. We are all God’s children.

ONE WORD TO SUM ME UP: determined

*CORRECTION: An earlier version of this story listed an incorrect year for the Bush v. Gore presidential race.

Print Headline: Chad Hunter Griffin; Chad Griffin was a boy from Hope who didn’t take no for an answer. As head of the Human Rights Campaign in Washington, he works to advance the rights of LGBT people across the nat