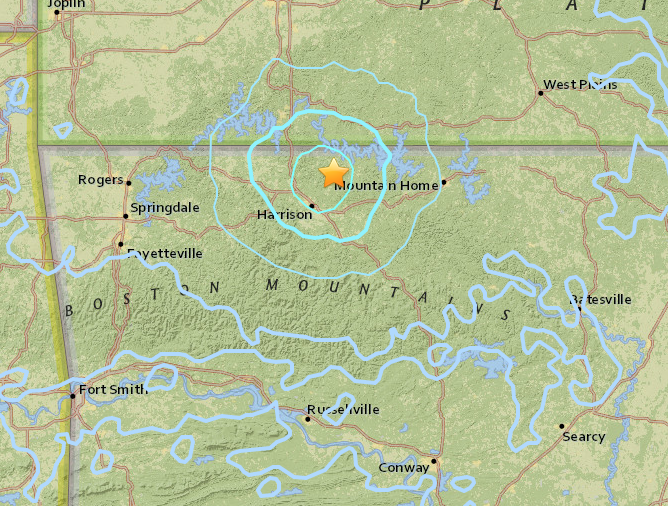 The star on this U.S. Geological Survey map shows the epicenter of an earthquake Sunday morning.

The first, strongest quake, which was centered about 5 miles north of Bergman in Boone County, occurred around 7:40 a.m.

By 1:45 p.m., more than 600 people in Arkansas, Oklahoma, Tennesee and Missouri had reported to the U.S. Geological Survey that they felt the shaking. Most categorized it as weak or light tremors, which are typically not associated with any damage.

"When it initially happened, all of our lines lit up," he said, noting none of the callers had experienced any damage.

Bolen said he didn't know at first what was going on.

"It shook the building and it sounded like loud thunder," he said.

The reports of shaking stretched from the epicenter into Northwest Arkansas and as far south as Little Rock and Jefferson County. At least one person reported feeling the shaking in the Memphis area.

The second earthquake registered a 2.4-magnitude. It occurred in the same area shortly before 8:30 a.m. By 1:45 p.m., only six people had reported online that they felt that quake.

The third and smallest quake was recorded as a 2.3-magnitude. It was recorded at 2:26 p.m., near the location of the other two quakes, about 5 miles west of Lead Hill.

Survey records show these are the first earthquakes of more than 1.0-magnitude in Arkansas since May 14, when a 2.4-magnitude quake occurred south-southeast of Marshall.

The first quake Sunday was initially said to be a 4.0-magnitude temblor before being downgraded to 3.2. It was later revised back up to a 3.6.

Maggie McNeary contributed to this report. 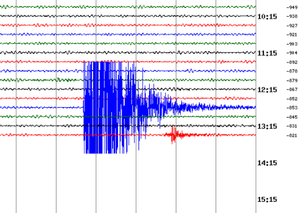 Photo by Arkansas Geological Survey
This graph recorded by a station at the Ozark Folk Center shows an earthquake Sunday morning in Arkansas.
ADVERTISEMENT