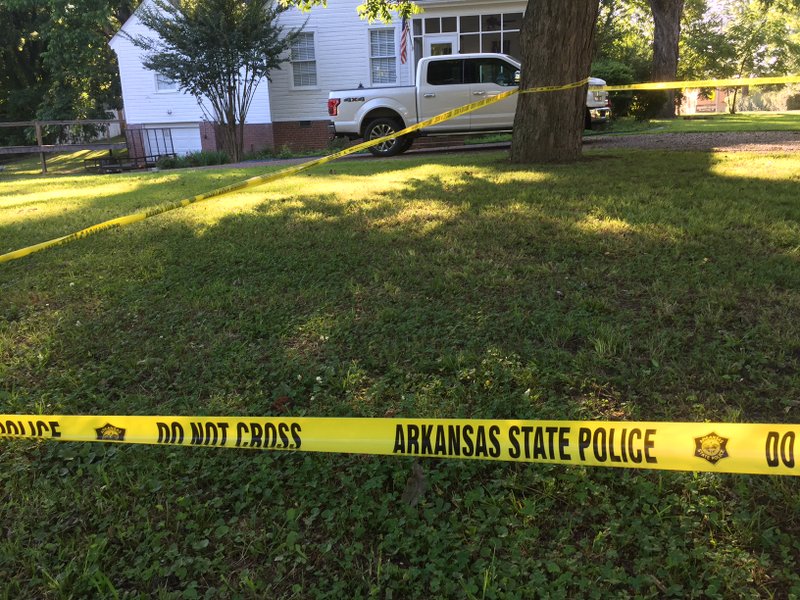 State police released more information about the fatal shooting of a Newport law enforcement officer at a news conference Tuesday afternoon and identified the suspect as an 18-year-old.

Lt. Patrick Weatherford was called with other officers to an area between Bowen Street and Newport Avenue around 6 p.m. to investigate reports of a vehicle break-in, state police spokesman Bill Sadler said.

At the scene, police spotted an individual who then fled, Sadler said. Weatherford and other Newport officials followed that person to a “residential area,” and the suspect allegedly turned toward the officers and fired a gun, Sadler said. He declined to say how many shots were fired.

Weatherford was struck and later died at a Newport hospital. Sadler would not say if the lieutenant was wearing a bulletproof vest at the time.

The 18-year-old surrendered to authorities at a police station around 7:30 p.m., Sadler said. No charges have been filed by the prosecuting attorney, and state police are not naming the teen at this time.

A Newport police official said at the news conference that he anticipates the suspect's first appearance hearing will be Wednesday morning, when a bond will be set.

Earlier Tuesday, the Independence County dive team was seen searching a body of water in Remmel Park. Sadler declined to say if authorities had located the weapon used in the shooting.

Sadler told reporters that the state agency is releasing limited information to “protect the integrity of this investigation.” He said it's possible other people are involved, though he added that “there should be no fear in this community.”

He also cautioned the media to be mindful of Weatherford's family and their grief.

“All he wanted to do was come to work and make things better for our community,” Scudder said.

“He was a wonderful person. Probably more so than anybody I've ever met in my life.”

The Newport police lieutenant who was fatally shot in the line of duty Monday evening had a wide smile, a calm nature and loved to sing while on patrol, according to the officer who trained him.

Bridget Hendrix, a former Newport Police Department officer, spoke about Weatherford, who was her “rookie,” at the old Jackson County jail about midday Tuesday.

[Read what else she said: Slain Arkansas police officer remembered by officer who trained him]

Friends and relatives of the Arkansas police lieutenant fatally shot in the line of duty Monday evening remembered him on social media as a beloved father who was respected by his peers, his community and “even most on the wrong side of the law.”

Lt. Patrick Weatherford was shot while helping another officer conduct a traffic stop around 6 p.m. near Remmel Park, said Arkansas State Police spokesman Bill Sadler. He later died at a local hospital. A suspect in the shooting is reportedly in police custody Tuesday morning after a manhunt.

Additional information will be released by state police at a 1 p.m. news conference in Newport.

Relatives, friends and neighbors posted pictures of a smiling Weatherford online as well as photos with the phrase “Pray for NPD” in white lettering with a blue line surrounding by black.

Tammy Hicks shared a photo of Weatherford and said in a Facebook message that she and her husband worked with the lieutenant at his off-duty jobs at Arkansas State University in Newport. Hicks worked as a clinical instructor there, and her husband, Bobby Hicks, is a police officer, she said.

She described Weatherford as a “fair man” who would “do his best to help those in need.”

“He was respected by his peers, community and even most on the wrong side of the law,” Hicks said.

In his tribute to the fallen lieutenant on Facebook, Jon Cook of Heber Springs said Weatherford, who he described as his cousin, was a “loving father, husband and all around good man.”

Cook said in a Facebook message that he has “lots of memories of my big cousin playing with little, annoying me when we were kids.”

“I always looked up to him and wish I could have turned out half the man he was,” Cook said.

Weatherford is survived by his wife, Kristen, a 21-year-old daughter and a 7-year-old son, according to a Facebook post from the Jackson County sheriff's office.

The 41-year-old has been an investigator in the Criminal Investigations Division since 2004 and graduated the FBI National Academy Session 263, in March 2016, the post said.

He was also thanked by Arkansas Special Olympics for volunteering his time as a dedicated “Guardian of the Flame” for their athletes.

“May we never forget how his life was taken so callously while working for the People,” the Jackson County sheriff's office wrote.

“We have the watch from here Patrick, we love you!”

Several Arkansas officials issued statements in the wake of a 41-year-old police officer's death in the line of duty.

Sen. Tom Cotton and several others recognized Lt. Patrick Weatherford’s 15-year term of service to the Newport Police Department. Cotton highlighted his achievement as Jackson County Officer of the Year, as well as his “unwavering commitment to the safety and security of our state” in a statement.

“My thoughts and prayers are with his family and friends, fellow officers, and the entire Newport community,” Cotton said.

Sen. John Boozman and Lt. Gov. Tim Griffin also offered their prayers to the officer’s family. In a statement, Griffin said “Arkansans mourn the loss of Lt. Weatherford as we recognize and honor his sacrifice in the line of duty.”

The lieutenant governor called the “heart-breaking tragedy” a reminder of the risks officers face while doing their jobs.

Gov. Asa Hutchinson tweeted support for Weatherford’s family Tuesday morning, saying that he had just been briefed on the capture of the man’s alleged killer. The governor released an official statement a few hours later.

“We are forever indebted to men and women like Lt. Weatherford, who put their lives on the line every day to keep others safe,” Hutchinson said.

NEWPORT — Residents who live near where a police lieutenant was gunned down Monday during a traffic stop recounted hearing several shots that evening.

Lt. Patrick Weatherford, 41, was shot at about 6:15 p.m. while helping another officer conduct a traffic stop in the Remmel Park area west of the Newport High School, said Arkansas State Police spokesman Bill Sadler. Weatherford was taken to Unity Health in Newport where he died, Sadler said.

Authorities have reportedly arrested a suspect in the fatal shooting. More information about the alleged shooter is expected to be released at a news conference later Tuesday.

On Tuesday morning, crime scene tape still bordered a front yard of a white house that sits at the corner of Park Place and Bowen Street, a few blocks southwest of the park. Alaynah Wood said she was at home in the 300 block of Park Place around 6 p.m. when she heard five or six shots, but she assumed they were “fireworks going off.”

The 14-year-old said she later realized the noises were gunfire when police officers told her to get back inside her home.

Deanna Kesselring said she was visiting her soon-to-be-new home in the area when she heard several shots Monday evening. Her son also thought the sounds were fireworks, but Kesselring said she knew better because of her experience working as a correctional officer. Plus, “sometimes you hear shots” in this neighborhood, she added.

The sound of the gunfire was muted, Kesselring said, but only because the walls of her new home are thick.

Once she got home to her current house on Newport Avenue, about two blocks away, Kesselring said police ordered her and her family to stay inside while a manhunt for the shooter continued. The neighborhood, composed of mostly residential dead end streets, was soon swarmed with police cars, she said.

Her family locked the doors, but Kesselring said she was not too concerned because she assumed the shooter was trying to get away and find a place to hide.

“If they were trying to get in, they would have done so already,” she said.

Kesselring said she volunteers at the local women's shelter and had met Weatherford a few times through that line of work. Though she knew him briefly, he seemed “pleasant,” she said.

“What I'm hearing from everybody is he was a nice guy,” Kesselring said.

Weatherford was recognized last year as the Jackson County Law Enforcement Officer of the Year. He had reportedly been with the Newport Police Department for 15 years.

Officials with the Jackson County sheriff’s office and the state Game and Fish Commission are assisting the Newport Police Department in some of their routine duties, said an official outside the town’s police headquarters.

NEWPORT — A suspect has been arrested in the killing of a decorated northeast Arkansas police officer who was fatally shot while assisting another officer with a traffic stop, police said.

Newport police told Jonesboro television station KAIT that a person was in custody, and that more information will be released Tuesday morning. Police said Weatherford had been assisting another officer with a traffic stop when he was shot.

KAIT reported that a dive team is searching for the gun used in the shooting, but did not say where.

"We're in shock," Newport Mayor David Stewart told the Arkansas Democrat-Gazette late Monday. "We are trying to put the pieces together right now."

Arkansas Attorney General Leslie Rutledge said Weatherford was recognized last year as the Jackson County Law Enforcement Officer of the Year. He was a 15-year veteran of the Newport Police Department.

"Lt. Weatherford was known for routinely preventing incidents and altercations from escalating into crisis, and I have no doubt that Lt. Weatherford began his watch today with the same mission to protect and serve the community he loved so much," Rutledge said in a statement Monday night.

Weatherford is the second Arkansas police officer to be killed in the line of duty this year. Last month, Yell County Lt. Kevin Mainhart was fatally shot while making a traffic stop in rural western Arkansas, and a suspect was arrested after an hours-long standoff.

Three Arkansas officers died in the line of duty in 2016.

Cpl. William Pressley Cooper, 66, with the Sebastian County sheriff's office was fatally shot on Aug. 10 when he and other officers responded to a domestic violence call southeast of Hackett.

McCrory Police Department patrolman Robert Aaron Barker, 26, was killed on Sept. 15 when his car struck a deer on Arkansas 17 south of Patterson as he responded to assist a Woodruff County deputy sheriff.

Weatherford is also the fourth officer to be killed in northeast Arkansas in the past seven years.

Trumann patrol officer Jonathan Schmidt, 30, was fatally shot during a traffic stop near a Trumann apartment complex on April 13, 2011. Jerry Lard of Trumann was convicted of capital murder in the shooting.

Two West Memphis police officers were killed on May 20, 2010, during a traffic stop on Interstate 40 in West Memphis. Officers Bill Evans, 38, and Sgt. Brandon Paudert, 39, who was West Memphis Police Chief Bob Paudert's son, were killed when Evans stopped a van driven by Jerry Kane Jr., 45. Kane's son, Joseph Kane, 16, opened fire on the officers with an AK-47.

Both Kanes were shot to death by officers during a shootout at a West Memphis Wal-Mart later that day.

Weatherford is the first officer shot in Newport in 24 years. Stewart, who was elected as the mayor of the Jackson County town of 7,783, was shot in the leg during a June 2, 1993, gunbattle with Alfonzo Brown when Stewart served as the Newport police chief.

Check back for updates and read Wednesday's Democrat-Gazette for full details.

— The Associated Press and Kenneth Heard