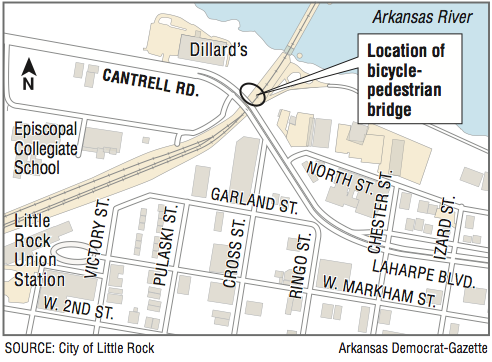 Map showing the location of the new bicycle-pedestrian bridge

The ramp will shore up a portion of the trail's Medical Mile that is slumping into the river and connect it with the 16-foot-wide pedestrian bridge that will cross railroad tracks north of the La Harpe overpass. City Directors this month authorized construction of the $1.1 million bridge.

Together, the more than $3 million in projects mean the trail will be separated from Little Rock streets from the Clinton Presidential Park Bridge until it reaches Dillard's corporate property. Talks between the city and Dillard's to reroute a portion of the trail onto the company's land -- and off slim Cantrell Road sidewalks -- are ongoing.

Construction of the pedestrian bridge is expected to be finished in early 2018, a city spokesman said. A timeline for the ramp wasn't immediately available, but the money should arrive in October, Landosky said.

The U.S. Department of Transportation's Office of Federal Land Highways awarded the grant as part of about $225 million doled out nationwide. Congress created the program in 2012.

Landosky said closing the gap with the bridge and ramp near LaHarpe will improve safety and navigation on the trail.

"It will make navigation of the Arkansas River Trail much easier," Landosky said. "Once we start putting that onto city streets, the identity of the trail itself becomes a little bit muddled."

Mayor Mark Stodola in a statement said development of the city's riverfront area has created difficult and costly challenges.

"This grant solves a big one, completing the trail from the Clinton Bridge to Dillard's, strengthening the connection between the Big Dam Bridge and the Clinton Bridge on our side, and most importantly improving safety for our cyclists and pedestrians," Stodola said.

A 20-block detour covering Third, Fourth and Markham streets in downtown Little Rock should be eliminated later this year, after construction of the Broadway bridge is complete and the trail segment running beneath it is no longer impeded.

In addition to improving the existing Arkansas River Trail, the federal award sets the stage for the city to apply for more money to build a north-south trail that connects the existing 15-mile Little Rock-North Little Rock loop with Central High School, Landosky said.

The so-called Central High Corridor, although years away from completion, would place four federal properties on the same network of bicycle-pedestrian trails. The other three are the Clinton Presidential Center, the Trail of Tears at La Petite Roche in Julius Breckling Riverfront Park, and the Murray Lock and Dam under the Big Dam Bridge.

"The Central High Corridor has the potential to create a safe, comfortable trail for people on the south side of [Interstate 630] to get to Downtown Little Rock where they work and enjoy some of our city's amenities," Little Rock Public Works Director Jon Honeywell said in a statement.

Mason Ellis, secretary for Bicycle Advocates of Central Arkansas, said the ramp near LaHarpe Boulevard would be an important part of the River Trail and the broader goal of a continuous, 67-mile network of trails connecting Little Rock with Hot Springs.

"The pieces are really starting to fall into place," Ellis said.