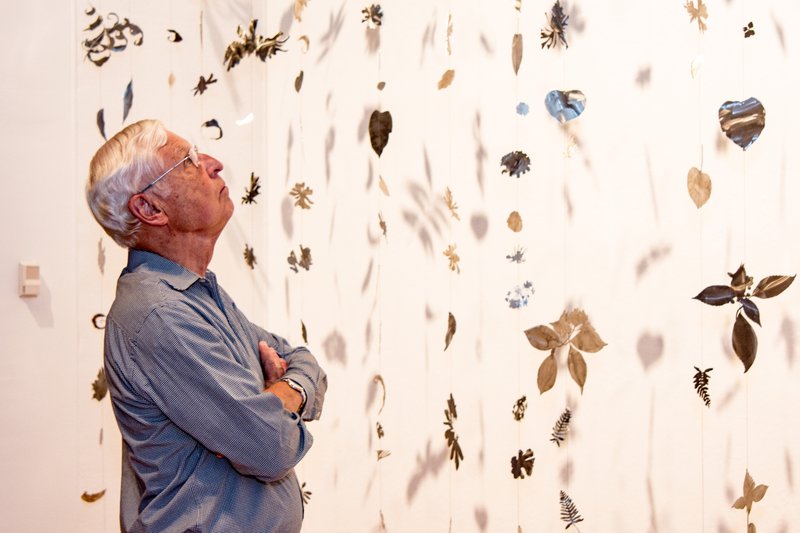 Bob McKuin takes in the installation work Fall at the Arkansas Arts Center. The large scale botanical art installation of stainless-steel cutouts by Carlyle Wolfe of Oxford, Miss., won a Delta Award at “The 59th Annual Delta Exhibition.” The exhibit continues through Aug. 27.

Dawn Holder has entered the "Annual Delta Exhibition" several times, but was never chosen to participate in the Arkansas Arts Center exhibit. 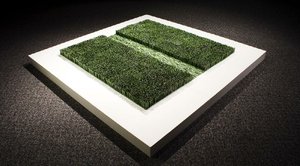 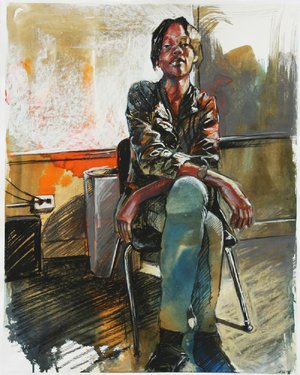 Photo by Courtesy of Arkansas Arts Center
Jason McCann’s pastel and watercolor work The American Student: Marshayla and the Drawing Class won an honorable mention for the Maumelle artist. 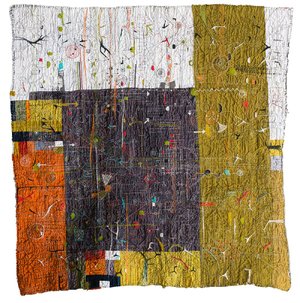 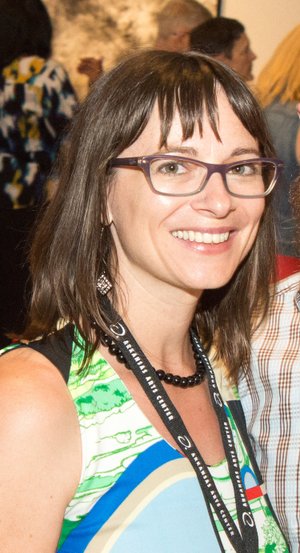 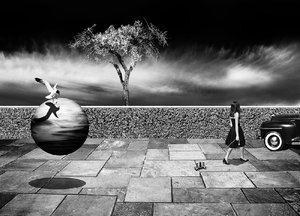 Photo by Courtesy of Arkansas Arts Center
The surrealist photo by Michael Elliott-Smith of Alexandria, La., is titled Lindsay Leaving the Courtyard. 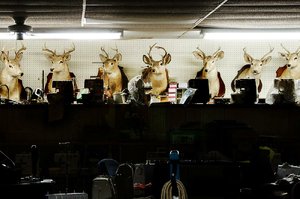 Photo by Courtesy of Arkansas Arts Center
A chromogenic print by Ryan Steed of Memphis hangs at “The 59th Annual Delta Exhibition.” Steed titled his work Damn the Headlights. 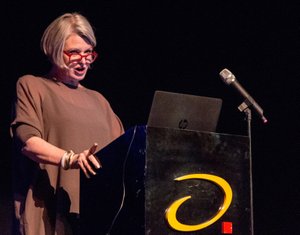 Betsy Bradley, director of the Mississippi Museum of Art 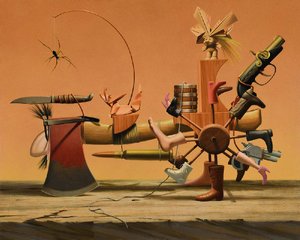 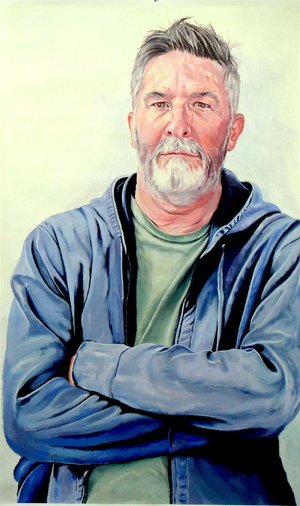 Photo by Courtesy of Arkansas Arts Center
Ray Allen Parker of Fayetteville had two impressive oil paintings on watercolor paper, including Faded Hoodie (self portrait). The work is 84-by-52 inches.

The Clarksville artist made her first appearance in the juried art competition in a big way -- she won the Grand Award, the exhibition's top honor, for her porcelain sculpture Grass Variation (Mown Path).

"I was so thrilled and excited just to be in the exhibition," says Holder, an associate professor of art at the University of the Ozarks.

Betsy Bradley, director of the Mississippi Museum of Art, was the juror of "The 59th Annual Delta Exhibition." It hangs through Aug. 27 at the center on East Ninth and Commerce streets in MacArthur Park. Bradley selected the works to be shown and chose the top three awards.

The two Delta Awards were won by Carlyle Wolfe of Oxford, Miss., for her hanging sculpture of stainless-steel cutouts titled Fall, and by Paula Kovarik of Memphis for her thread, fabric and batting piece Chaos Ensues.

In her comments at the show's opening reception June 8, Bradley placed each award winner in the timeline of art history for their medium.

"Each artist used a traditional medium -- quilting, pottery and flower painting -- and did something innovative in their medium and delivered that idea in its final manifestation," Bradley says.

"I read over and over some of the language about 'The Delta,' and the word 'innovative' was used several times. There were a lot of good paintings in this exhibition, but none that showed the risk-taking these three women did. I felt very comfortable choosing them."

"I really liked the idea of an installation piece. The craftsmanship, the sheer beauty of it really knocked me out. The kind of commitment for this artist to execute something this detailed, this monumental, was very impressive."

Grass Variation (Mown Path) is a 60-by-60-by-2 1/2 inch porcelain sculpture of a lawn with a path cut in the middle. Each blade of grass was formed, glazed and fired by Holder over an approximately six-month period.

"I hope this 'Delta' will be a milestone for me," she says. "I've worked on grass sculptures for four years, it has catapulted my career. I've shown in museums around the country; this body of work is building a lot of momentum. It's very exciting to be in the 'The Delta' and to win the Grand Award. It's very validating after spending thousands of hours in the studio."

The artist says she never took the years of rejection personally.

"['The Delta'] seems to have a really wide range of jurors with different tastes," Holder says. "Everyone looks forward to the new vision and what the new juror is interested in. I figured I might as well keep entering. With juried shows, I've had this work accepted and rejected. When the work is rejected, I just look for another show."

Holder says her work is based on the idea of landscape and how we make cultural decisions about what we do with the nature around us. There are two Grass Variations works in the exhibition.

"A lawn is a very specific decision about what we want around our house. Are we a good neighbor who keeps it up, a bad neighbor who doesn't? How do we decide what plants we choose and the parts of the plants we don't care about? To me, it's interesting to dig into the mundane and the associations we have ... taking a second look at something you don't think about."

That includes the discards, Holder says.

"How can I take a weed or grass clippings and make them beautiful?"

Once she has the idea, Holder says her studio work becomes very repetitive. "I'm trying to meet a daily quota. Each block of grass takes a half hour to make, not counting the time it takes for glazing, loading into the kiln and repeating the process."

While she works, Holder listens to indie rock and jazz music and podcasts such as This American Life and Invisibilia.

"Once I decide on an idea, I'm making things. It's physical; my mind can go anywhere."

Holder also is showing work with Melissa Cowper-Smith at the Historic Arkansas Museum in Little Rock. "Traces Remain" hangs through Aug. 6. She will be part of the next Culture Shock art collective show at the William F. Laman Library in North Little Rock, probably in September.

Kovarik, who was in "The Delta" last year with a fabric work titled Pollinators, says her mother taught her everything she knows.

"I've done needlework since childhood. When my mother started quilting, I tried it. I am not patient enough to do traditional quilting, so I found a new way for me to work and use that medium in a contemporary way."

Her Delta Award-winning Chaos Ensues emerged from her life's experiences.

"There were a lot of challenges in my life and my family and it all came to a head," she says. "I had several pieces started that were very structured, but I couldn't face them. So I decided to cut loose. I'm really excited about this direction, the layering of thread, color and texture speaks to what I'm experiencing in life right now."

Chaos Ensues has hints of modern art painter Paul Klee and abstractionist Wassily Kandinsky, maybe even a little of the surrealism of Joan Miro.

"They, and Alexander Calder, have been extremely influential in the way I see things, even when I'm walking outside," Kovarik says. "I like having them in my head."

Kovarik, who uses a sewing machine and also does hand stitching on her work, says she appreciated Bradley's exposition on women and fiber in art. "Then I heard her say my name ... it was overwhelming."

As one might expect, Kovarik finds her materials in fabric stores and online, but she also rips up old shirts and buys odd pieces of clothing or fabric she finds in thrift stores.

It can take anywhere from a few days to more than a year to finish a piece. Chaos Ensues took about three weeks.

"Most of the time I'm using scraps and usually solid colors. That allows me to get creative with the stitching."

Before introducing Carlyle Wolfe to the Arkansas Arts Center audience, Bradley showed a slide of an Emily Dickinson herbarium: a collection of pressed plant specimens. Dickinson started it as a teenager and often included a specimen with her letters. Flowers and plants were frequent subjects of her poems. Bradley also showed how the work by female artists in the past was expected to be decorative, such as floral still lifes.

It was a lovely way to present Wolfe's nontraditional approach. Her site-specific work, Fall, is a cascade of leaves, plants and flowers held in space by translucent synthetic line. The botanic-inspired hanging sculpture is composed of stainless-steel cutouts that move with the air currents and shimmer in the light.

"My work is drawing-based," Wolfe says. "I make plant drawings and have collected them for 15 years. Since I'm working in sculpture, drawing is the beginning." She says she is inspired by the natural world.

"In the process of collecting plants and drawing, I'm observing seasonal change and the passage of time. I really enjoy moving through natural space in that way. There are many layers of significance in the natural world."

Wolfe has two pieces in "The Delta" -- Fall and Magnolias, a 48-by-120-inch oil on panel painting of subtle beauty and great depth.

The other big award winner at this year's "Delta" was Fayetteville's LaDawna Whiteside, who won the Contemporaries' Award for her 96-by-96-inch graphite on paper installation Body: Flesh and Bone. She was chosen for the award by members of the Contemporaries, an Arts Center auxiliary group.

Whiteside, a visiting teaching artist at Arkansas Tech University at Russellville, says this is her first time to enter the competition since she won the Grand Award in 2010. She also won that year's Contemporaries' prize.

"My direction for the past decade has been line drawings and drawing installations," she says. "I'm using longer pieces of paper and making longer marks now. I'm always experimenting with drawing and painting combined."

Artists, Whiteside says, are "responsible for culture, for designing the world we live in."

One of her series is titled "Landscape Empathy From the Inside Out."

"In that series, I was inspired to think about landscape and the voice from the center of this country, the survival of the landscape and humanity. I wanted to bring a view that is apart from the coastal art world."

Whiteside also values reading and writing as part of her process.

"Reading and writing are imperative to create compelling work," she says. "In my essays, I write about the meaning of the lines, the typography of the land ... excavating, painting, discipline in my drawings. All my work is abstraction, which can be difficult for people to understand. Some probably wonder 'What is this artist trying to get away with?' That's why I write about my work on my website [ladawnawhiteside.com]. Anyone working in abstraction benefits from writing. Artists need to help the viewer understand what the intention is and how it works.

"My work is not intended to be a visual discussion on what we know, it's inviting us to ponder what we don't know, what the possibilities are."

"The Work of LaDawna Whiteside" hangs through Aug. 18 at The Gallery at Midtown Associates, 211 S. Main St., Bentonville. It features her series of drawings titled ''Animal Architecture'' and ''Landscape Empathy.''