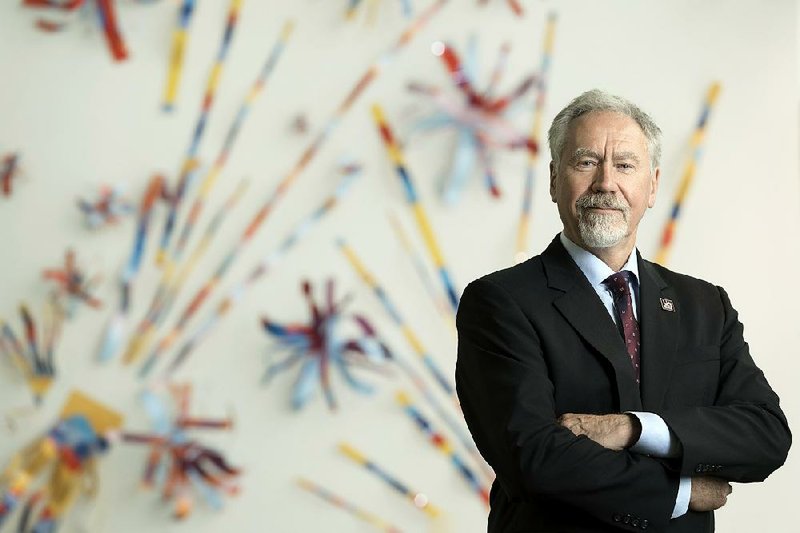 When a state law allowing guns on Arkansas college campuses goes into effect later this year, most of the University of Arkansas at Little Rock will be exempt because of a high school moving in, according to the charter school's chief executive.

Starting in August, eStem High School will have a presence on the campus, and federal law prohibits guns within "1,000 feet from the grounds of a public, parochial or private school," with some exceptions.

The partnership between eStem and UALR is unique to the state, though some other campuses -- like the University of Arkansas, Fayetteville -- also may see some guns-zone exemptions because of bordering high schools, according to a newspaper analysis.

The analysis found that the guns-free zone in Little Rock will likely bisect several buildings and a cluster of student dormitories.

John Bacon, chief executive of eStem Public Charter Schools, said in an email: "We will set the zone as wide as possible to include all buildings being used regularly by eStem students."

UALR Chancellor Andrew Rogerson said he is relying on the eStem schools to develop policies related to the guns-free zone.

"It really is an eStem issue rather than a university issue," he said. "We've got our own problem to deal with in how we're going to police the new policy."

Bacon said two buildings on the UALR campus are likely to be designated high-school zones.

Larson Hall will be the eStem high school's home for the 2017-18 school year, and Donaghey Student Center will have a specified breakfast- and lunch-serving area for the high school students' daily use.

Bacon noted that in 2019 the school plans to add classroom space in Ross Hall -- which is next to Larson Hall -- and that will expand the guns-free zone.

The Arkansas Democrat-Gazette used mapping software to determine the 1,000-foot buffer zones around Larson Hall and Donaghey Student Center. The result was reviewed by Bacon. He said the zones could be larger if computed to the edge of each building rather than the center.

Most campus buildings between Asher Avenue and West 32nd Street appear to be within the no-guns zones, according to the analysis. Buildings -- like the generator plant -- east of UALR's Campus Drive appear to be on the edge of the buffer zone.

Additionally, some buildings north of 32nd Street appear to fall within the guns-free zone.

Ottenheimer Library and Fribourgh Hall appear to be in the guns-free zone. Slightly north, the Engineering Technology and Science buildings and the Fine Arts building are on the cusp of the zone. They could be part of the guns-free zone if the 1,000 feet circumference is drawn from the edge of the Donaghey Student Center.

"Signs will definitely be posted around the perimeter of the gun-free zone," Bacon said. "We are working with UA-Little Rock to determine how best to police the zone, but no decisions have been made yet."

Education officials will have several months to decide how to implement the state and federal laws on campus.

The new state law creates an "enhanced" concealed-carry license that will allow permit-holders, who take up to* eight hours of extra training, to carry their weapons onto the campuses of public two- and four-year colleges and into many publicly funded buildings, including the state Capitol.

The law has exceptions, such as no guns at athletic events like football games, as long as a security plan is approved by the Arkansas State Police.

Act 562 becomes effective Sept. 1. It gives Arkansas State Police 120 days from that date to formulate rules for the additional firearm-training program for permit-holders.

Bill Sadler, a spokesman for the Arkansas State Police, said he expects rules and policies to be written and sent to colleges and universities by late this year.

Rep. Charlie Collins, R-Fayetteville, who sponsored Act 562, has said that knowing that bystanders could be armed will dissuade would-be killers.

At a news conference earlier this year after the bill was signed into law by Gov. Asa Hutchinson, Collins said the legislation "is increasing the safety of Arkansas by deterring some of these crazy killers from choosing to go to our campuses and potentially murder people.

"This is not a panacea. I don't pretend that it is. Bad things can happen. There is no such thing as a perfect solution, but I believe it is going to move us in the right direction," he said at the time.

In a recent interview, Collins said federal law will take precedence over state law. He said it's not up to him to judge UALR's plan.

Deitra Blackwell, a 67-year-old student at UALR, asked about eStem's impact on Act 562. She broached the subject on Hutchinson's MyIdea website, which collects people's ideas on improving government. The website is myidea.arkansas.gov.

In an interview, Blackwell said she opposed the guns bill and hoped the guns-free zone would extend throughout the entire campus.

"One of the purposes for having the high school on the college campus is to encourage those students to take college classes and to continue with a bachelor's degree at UALR," she said.

"One of the faculty members just made an offhand comment -- 'I guess there will be a lot more A's and B's' [given by teachers] -- so you don't have conflicts with students who are not mature enough to handle a conflict. The idea of a college campus filled with people with guns really terrifies me." 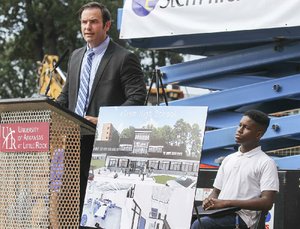 Photo by Benjamin Krain
eStem CEO John Bacon, left, and high school student Jarron CQ Gray, right, discuss the benifits to the community of partnering with UALR to move the charter school's high school campus to the university campus during an event Wednesday at UALR. 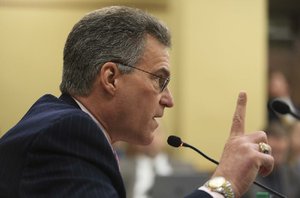 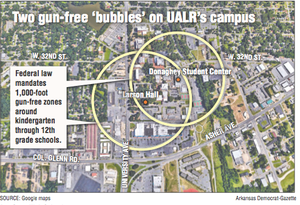 Photo by SOURCE: Google maps / Arkansas Democrat-Gazette
An eStem High School will be located on the University of Arkansas at Little Rock’s campus. Larson Hall will house the high school. Donaghey Student Center will have a specific breakfast and lunch serving area for the high school students’ daily use. Both are expected to be designated gun-free zones under federal law, with 1,000-foot barriers around them. The federal law will supercede a new state law allowing guns on college campuses.

*CORRECTION: The new state law allowing guns on Arkansas college campuses creates an “enhanced” concealed-carry license that will allow permit-holders, who take up to eight hours of extra training, to carry their weapons onto the campuses of public two- and four-year colleges and into many publicly funded buildings, including the state Capitol. A previous version of this story gave the incorrect hours of training for permit holders.