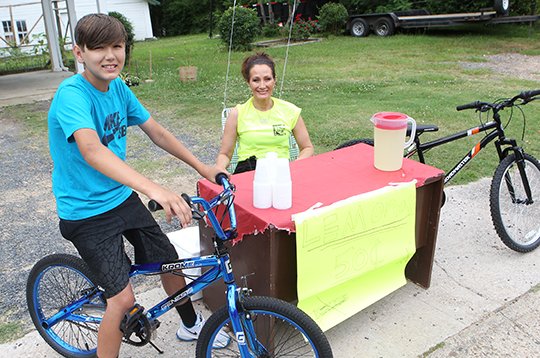 The Sentinel-Record/Richard Rasmussen HAPPY ENDING: Kaleb Hayes, 14, is all smiles on top of his new bicycle Monday as he and his mother, Nicole Hayes, man his lemonade stand outside his home on Woodlawn Avenue. Hayes was raising money to buy a bicycle and a Facebook post on Thursday prompted an outpouring of support from the community, with two bicycles being given to him.

HOT SPRINGS — A lemonade stand turned into a sweet deal for an enterprising Hot Springs teen, thanks to the generosity of several good Samaritans.

Kaleb Hayes, 14, set up a lemonade stand outside his home in the 300 block of Woodlawn Avenue last week with hopes of raising enough money to buy a bicycle. His recently divorced mother, Nicole Hayes, didn’t have a car and the boy thought he could use a bike to run errands as needed.

Within a few hours, he had been given two bicycles and had sold so much lemonade that he had to call his mother to provide more supplies after the community rallied around his efforts.

Nicole Hayes said Kaleb, his sister, Keely, 11, his cousins and other neighborhood children had sold lemonade in the past, and she had assumed her son would raise a few dollars.

That all changed after Jeremy Porter, a student at Lyon College in Batesville, passed by the lemonade stand.

“I was driving by and saw the kid trying to sell lemonade to raise money,” said Porter, who is from Hot Springs. “So I decided to buy a couple cups off of him to help promote a young entrepreneur. I asked him what he was raising the money for, and he told me it was to get a bike so he could help his mom get anything from Kroger, a few blocks away.”

Porter posted about Kaleb’s efforts on Garland County Swap Shop, a Facebook group, to see if anyone would go out of their way to buy some lemonade or maybe help the boy by donating a bike or selling one cheap to Porter so he could help out Kaleb.

“The post kind of blew up with a lot of people concerned and a good amount of people willing to help,” Porter said.

In less than an hour, the post had received more than 100 comments and had caught the eye of Jeremy Davis, a Hot Springs resident who said he was scrolling through Facebook and saw the post.

“It just touched me,” Davis said. “This generation nowadays just don’t know how to go out and try to earn money for something they want. It seems like they just stare at their phones. So that part really touched me.”

Davis said his childhood had been similar to Kaleb’s and that he also had to work for everything he wanted.

“I just felt like the Lord was telling me to do something,” Davis said. “I feel very blessed these days and knew I could help.”

So Davis stopped by and talked to Kaleb, who explained what he was doing. He asked the boy his favorite color — Kaleb told Davis he liked blue — and then Davis headed to Wal-Mart, where he bought the only blue bicycle the store had in hopes that it would be the right size for the boy.

When Davis returned to the lemonade stand, he discovered another person, Whitney Monroe, had seen the post and had dropped off a 10-speed mountain bike.

“I could tell he was appreciative, but it wasn’t really what he wanted. It was a little too big for him,” Davis said. “I asked him what he was wanting and he described the size and that he wanted smooth tires. I pulled out the one I had bought, and it was exactly what he wanted.

“He tried to give me all the money he had raised so far, but I told him to keep it and do what he wanted with the money. It was just one of them deals.”

Kaleb said he “felt weird” getting two bikes within only a few minutes, noting that he was worried he was being greedy. So he gave his sister the 10-speed, which was the right size for her.

“It feels great using social media for something positive and helping a kid out who decided he wanted to earn money,” Porter said after learning what had happened. “Praise God for the works he does and the people he uses.”

Nicole Hayes said she had been working with her mother, who owns a cleaning company, when Kaleb called her and told her he needed more sugar and lemonade. Before she could return home to get the supplies, her brother dropped by with tears in his eyes and asked her if she had been home.

She said she and her mother read Porter’s post and the comments and began to cry.

“We got in the truck to run home, and as we pulled up they were both riding their bikes, just cheesing and smiling,” she said, laughing. “They had completely abandoned the lemonade stand.”

Nicole Hayes said they had moved into their house about two months ago, after her divorce, and that Kaleb was still having a hard time dealing with everything.

“There couldn’t have been a better time for someone to do this,” she said.