From Olympian to 'American Ninja Warrior' 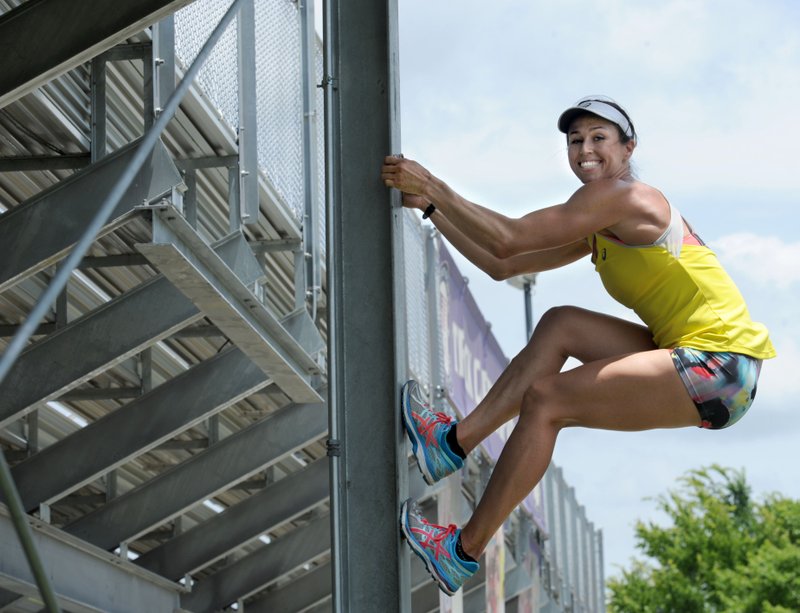 FAYETTEVILLE -- Arkansas viewers of "American Ninja Warrior" should have caught a good look at a familiar face during last week's season premiere.

The contestants during the NBC television show's "Los Angeles qualifier" included former Arkansas and Olympic pole vaulter April Steiner Bennett. "American Ninja Warrior," now in its ninth full season and sixth on NBC, takes contestants through a large obstacle course, and contestants are battling against time and gravity for an attempt to reach the national finals in Las Vegas and win $1 million.

WHAT The show, now in its ninth season this summer and its sixth full season on NBC, challenges competitors to take on a series of obstacle courses. Contestants attempt to advance through one of six qualifying rounds, then through the city finals for an opportunity at the national finals in Las Vegas. The national finals features a stunning four-stage course modeled after the famed Mt. Midoriyama in Japan, and the winner there takes home $1 million.

"It's like a big kid playground," Steiner Bennett said Friday while she instructed vaulters during the Stacy Dragila Vault Camp at Ramay Junior High. "It's ginormous. The things are sometimes unattainable, and I have always liked that aspect of it. I always try to overachieve and go for things that are unattainable to some. That was my draw to it."

Steiner Bennett, despite not making it all the way through the course, advanced to the city finals episode, which will air some time in July. She breezed through the first four obstacles in 1 minute, 43 seconds, but her run ended short as she fell into the water against what is called the "battering ram," an event where contestants must move one spinning cylinder across a metal bar while dangling in midair, then use their body motion to jump and catch another cylinder that's 6 inches higher than the first one.

"I felt pretty good," Steiner Bennett said. "But that fifth obstacle got me. That's a brand new obstacle, and a lot of people were trying to figure out how it moved. The thing spun, and you were only allowed to use your hands and maybe your legs, but that would have been hard because it's only a foot long and there's a lot of shimmying going on.

"That was a hard one for me, and I think I just underestimated it -- as well as my hand hit the bar. When one hand gets on the cylinder and you grab, it just spins. I hit the water before I even knew I had missed it."

Most professional athletes dread that point in time when they realize their athletic careers are about to end and they must find something else to do with their lives. Steiner Bennett, who competed in the women's pole vault during the 2008 Olympics, felt that time was close after she failed to earn a spot on the 2016 Olympic team and suffered a serious lower leg injury that didn't allow her to do anything for a while.

"I was a little lost, a little depressed -- kind of a small tornado happening," she said. "I was trying to find out what to do next. I wasn't sure if there was another Olympics in my future to even attempt, and I had an injury that wasn't allowing me to do anything. Exiting out of a professional sport isn't easy."

It was then a friend introduced her to "American Ninja Warrior," and she became intrigued because a number of former pole vaulters have competed on the show. Upon a suggestion from a friend, Steiner Bennett took up rock climbing, which she could do in order to improve her grip strength and stay in shape while not risking further injury to her leg.

She then applied to compete on the show, and she received the call in February. There were four other contestants in Arizona -- Steiner Bennett's home state -- who also received invitations, and they agreed to get together for four weeks of "ninja" training, which was much more different than Steiner Bennett had experienced while training for the pole vault.

One of those contestants was Beth Crosby, who lived in the same neighborhood with Steiner Bennett when they were young. Crosby had previously been chosen as a contestant on a show and had been a tester of the obstacle course during the show's sixth through eighth seasons, and she became not only Steiner Bennett's training partner but her coach as well.

"April is a naturally gifted athlete," said Crosby, who also competed on "Team Ninja Warrior" last season. "But 'Ninja Warrior' is still a relatively new sport. It doesn't matter if you're an Olympic athlete because it doesn't always translate to what you do on the show.

"With me being on the show, I could give April the knowledge on how to develop strength and use it for optimal performance. She had to work on her upper body and grip strength, but I could educate her on techniques for the different obstacles and how to apply it."

Last week's episode, which is one of six qualifying rounds, was taped in the spring, and Steiner Bennett didn't know what was in store for her until the moment she stepped on the platform.

"All of that was brand new," she said. "You don't know anything until they walk you through it and go over the rules -- a lot of rules. Ninja gyms are not as big a scale as they create on the show.

"In a couple of gyms, I wanted to do the warped wall. I wanted to make sure I run and grab that, and I did that pretty quick. They recreated older stunts, ones they had seen before, and varied it a little to make it more challenging. A lot of those helped me prepare for something similar that I might see."

"I could see the desire in her to go out and conquer everything. I just told her 'Hey, just have fun and take it all in.' She handled it well, and it was nice to see that confidence. I was very impressed with what she had done."

In the next round, Steiner Bennett said she will focus more on the "battering ram" and hope for better results. Meanwhile, she fully expects the bar to be raised a little bit.

"That fifth obstacle is tricky, so I wanted to make sure I could complete that one and know what I did wrong," she said. "It was a really big thing for me. I thought I could get through the other obstacles.

"When they go to city finals, they take things away. There are further jumps to the platform, and the drops on the cannonball run will be different. They change things up to make things more difficult because they have to raise the bar."

It won't be the only time Steiner Bennett will be on television. She and another former Arkansas pole vaulter, Ariel Voskamp, will also be on a future episode of "Spartan Team Challenge," which also airs Monday nights on NBC.