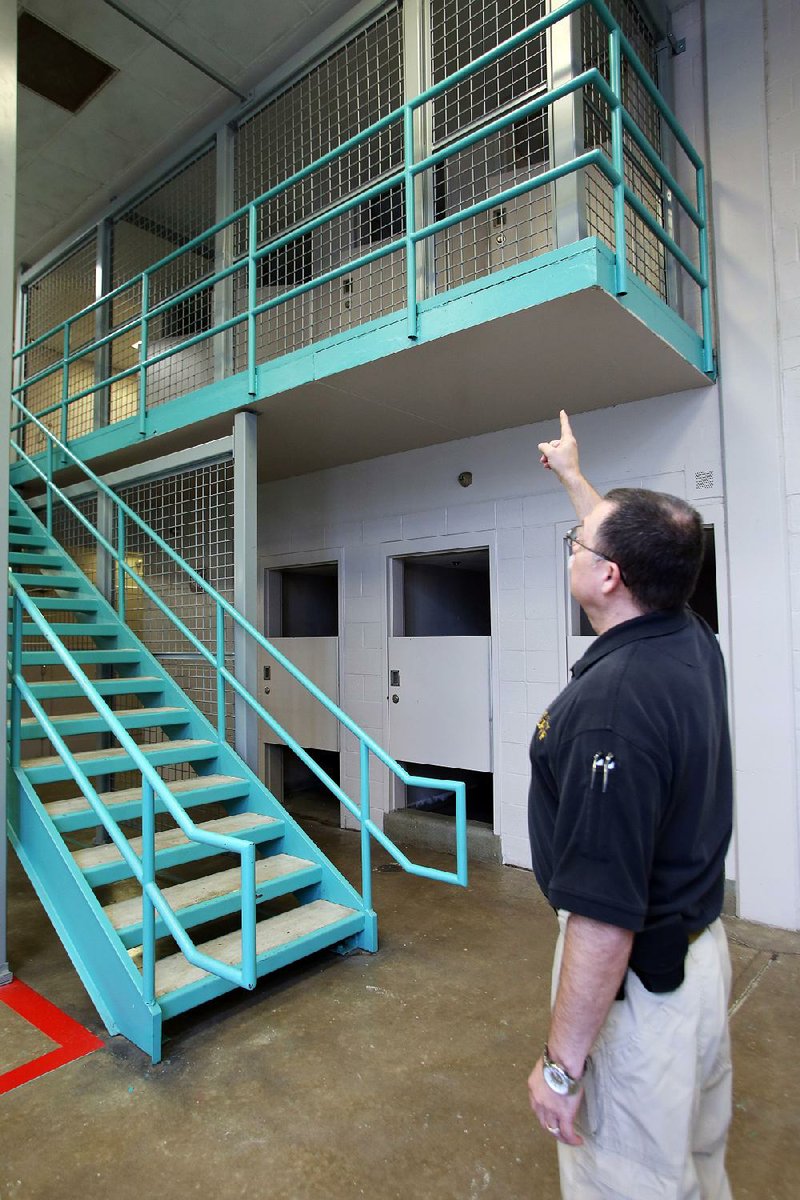 The Pulaski County jail has completed installation of fencing in 15 second-floor units, a project intended to prevent inmates from jumping to the first level in attempts to harm or kill themselves.

The $1.1 million project began in November 2015 when the county submitted a purchase order to Arkansas Fence and Guardrail. The Little Rock-based company completed the first phase of the renovation in mid-2016 after it installed the steel and aluminum grate fencing in eight jail units over several months, the Pulaski County sheriff's office reported.

The second phase began in the fall. Maj. Matthew Briggs, who oversees jail operations, said the project was completed earlier this month when fencing had been installed in the seven remaining units.

The fencing is bolted from the floor of the second tier to the ceiling. Before the project was completed, a guardrail had been the only barrier on the upper level.

Briggs said the jail decided to purchase the anti-jump fencing after a series of inmate deaths and injuries that began in 2014. He said at least five inmates tried to kill themselves by jumping from the second floor, a fall he estimated to be roughly 20 feet.

One of those inmates, Richard Plant, 40, of Little Rock jumped to his death in March 2014, one day after being booked in the jail on robbery and domestic battery charges, according to the jail.

Another inmate, Norman Schroeder, 59, reportedly died after falling from the second floor and striking his head in April 2015.

"Based on the trend that was occurring, we had to do something to prevent inmates from harming themselves," Briggs said.

Funding for the project came from a county ordinance that collects a $5 fee from people found guilty of misdemeanor traffic violations.

Briggs said inmates in two-story units were moved to other units when workers were installing the fencing. The jail also repaired electrical lines, fixed plumbing issues and completed other general maintenance in the units during those times.

Jails across the country have reported instances of inmates trying to harm themselves by jumping from upper levels.

The Santa Clara County sheriff's office in California reported in April that an inmate died from his injuries after he jumped from the second floor to a common area below. Last year in Walton County, Ga., a woman being held in the county jail climbed over the guardrail on the second floor and fell to her death, according to reports.

Briggs said the ratio of inmates to jailers at the Pulaski County jail made it difficult to prevent such attempts. The jail is built to hold 1,210 inmates and is authorized to hire 352 employees, including administrators.

One deputy supervises each unit of roughly 79 inmates, according to Briggs.

Sheriff Doc Holladay said preventing inmates from harming themselves will remain a challenge, even with the fencing installed.

"It's nearly impossible to totally prevent, because there's so many different ways that can be manufactured to do it," he said. "But [the fencing] is certainly one of the things that we could do to make it much more difficult. So it was well worth the expense."