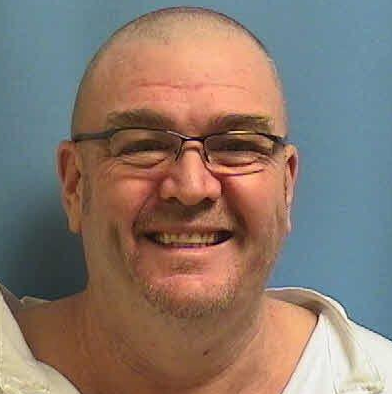 Robert Woodward. He now has a graying beard, authorities said.

An inmate escaped while working outside an Arkansas prison Tuesday morning and is believed to have later stolen a pickup hauling a tractor from a gas station, officials said.

Robert Woodward, a 46-year-old white man, escaped while he and fellow inmates were mowing near a cornfield by the Delta Regional Unit in Dermott around 8:20 a.m., Arkansas Department of Correction spokesman Solomon Graves said in an email. The facility is located at 880 E. Gaines St.

Authorities believe Woodward stole a white 2013 Ford F-250 hauling a green John Deere tractor from a nearby gas station, Graves said. The vehicle has an Arkansas license plate with the number 764UZM.

Prison staff and local law enforcement are searching for Woodward in the area.

The pickup belonged to a customer who had stopped at the Dermott Super Stop at 302 E. Speedway St. earlier Tuesday, a gas station employee said. The business is about a mile-and-a-half drive from the prison.

The customer got something to eat, turned and saw someone taking off in his truck, the employee said. Police are currently at the gas station reviewing security camera footage of the theft, she said.

Woodward was arrested in Arkansas after he led authorities on a vehicle chase along part of two interstates in Little Rock on Jan. 17, police said.

The 46-year-old was first stopped around 9 a.m. after his Dodge pickup was spotted swerving along eastbound Interstate 30 near Arch Street, police said. While the trooper was checking his license, Woodward reportedly sped off and drove onto Interstate 440, then back onto the westbound I-30 ramp.

He led state police on a chase and was ultimately taken into custody after troopers rammed his pickup, shot out a tire and approached the vehicle with a K-9, police said.

Woodward was wanted in “as many as five states” on charges including escape, assault with a weapon and assault on a law enforcement officer, state police said in a January news release announcing his arrest. There was no immediate word on the status of charges in other states.

Woodward was originally reported to be from North Carolina, though a Hot Springs address is listed on the Department of Correction website.

Woodward was sentenced to 96 months in prison and arrived at the Delta unit on April 6, Graves said. He was convicted of fleeing.

He stands 6 feet 1 inch tall and weighs 226 pounds, according to the Department of Correction website. He has a cropped haircut and a graying beard, Graves said.