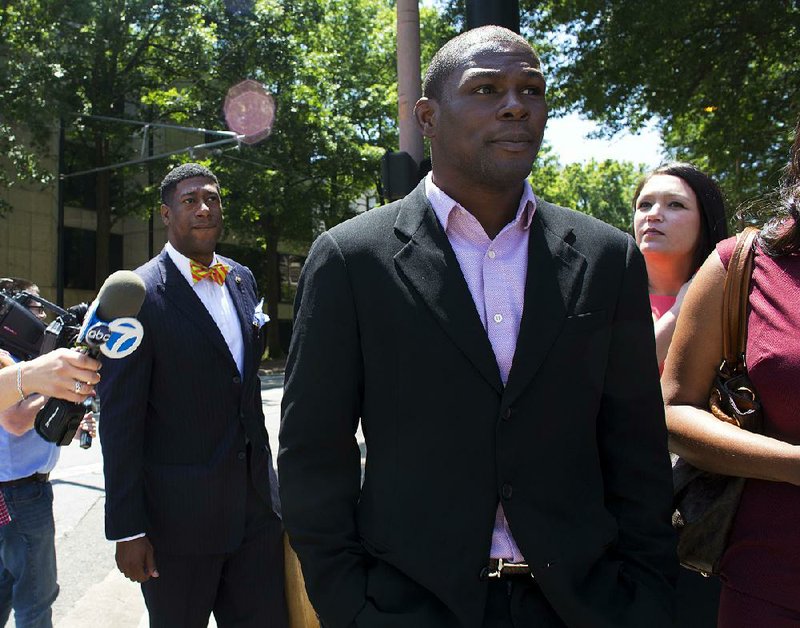 FILE — Jermain Taylor leaves the Pulaski County Court House with members of his council after being ordered to 6 years of a suspended sentence in a trio of felony cases May 20, 2016.

Representatives for Jermain Taylor, a former Olympian and world champion boxer, informed Pulaski County Circuit Judge Chris Piazza on Thursday that Taylor was in Florida, with no money and no intention of making his afternoon hearing in Little Rock.

Taylor was scheduled to be in Piazza's court regarding a lawsuit filed against him by two family members after a 2014 shooting left his cousin Tyrone DaWayne Hinton in critical condition.

Jermain Taylor through the years

In 2015, Taylor, now 38, bonded out of jail and was allowed by Judge Leon Johnson to move to Ocala, Fla., so he could get back into boxing shape. Several months after the move, Taylor pleaded guilty to nine felony charges, including those related to the 2014 shooting of Hinton, and is now serving a six-year suspended sentence.

Hinton's lawsuit, filed in August 2015, seeks compensatory and punitive damages for "substantial medical bills" that have left Hinton in debt. A bullet still remains inches from his spine, too close for physicians to remove without risking his life, his attorney Donald Campbell said.

"[Taylor's] representative said he's in Florida and didn't have any money, didn't have an attorney and wasn't going to be here today," Piazza said as the brief hearing got started.

Earlier this year, Taylor's attorneys, Hubert Alexander and Allison Allred, filed a motion to be relieved from the case as Taylor's counsel.

"The attorney-client relationship has reached an impasse in that [we] have had very little or no contact with the Defendant since December 1, 2015," the attorneys wrote in their motion. "And Defendant has not paid the agreed upon retainer for services."

So in Piazza's courtroom Thursday, only Hinton and Campbell stood before the judge as Campbell made a single, straightforward argument.

A trial date to determine the amounts Taylor owes to the plaintiffs will be scheduled with or without Taylor's presence, although Piazza said the boxer will be notified about it.

The relationship between Hinton and Taylor -- who was known as "Bad Intentions" in the boxing ring -- goes back to their childhoods, court documents show. At the time of the shooting, Hinton was employed by Taylor to assist him in preparing for a world championship boxing match against Sergio Mora in February 2015.

On Aug. 26, 2014, Hinton and Aharon Coley -- who is Hinton's son and is listed as a plaintiff in the suit -- were driving in Taylor's car from their gym to Taylor's former North Little Rock home. They pulled the vehicle up to his gated driveway and walked around an open end of the gate to where Taylor's children were heard playing near the house, according to court documents.

When Taylor emerged, he confronted Hinton and Coley over some damage he saw on the exterior of his vehicle. When they denied having caused any damage, Taylor went into his home for several minutes and re-emerged with a pistol.

"With no other spoken interaction with the Plaintiff's after his reemergence from the home at the property, Taylor exited the garage area of the house and raised his pistol, pointing it in the direction of Hinton and Coley," the suit reads.

Taylor then told Hinton that he was going to kill him for lying and began firing the pistol in their direction, striking Hinton five times as they ran down the driveway.

The two jumped back into Taylor's vehicle and sped away as Taylor gave chase and continued firing his pistol, reports said. It wasn't until Coley found a nearby Dollar General Store that they were able to call an ambulance and police.

Hinton has since said he hopes Taylor goes free so he can resume his boxing career and pay for Hinton's medical expenses.

Months after the shooting of Hinton, Taylor was arrested after he had threatened a family of five with a pistol and fired two rounds into the air during Little Rock's Martin Luther King Jr. Day parade in January 2015.

Taylor pleaded guilty to charges related to the incident at the same time he pleaded guilty to the shooting of Hinton in 2015. However the civil suit filed by the family asks for damages for the "extreme fear and severe emotional pain and emotional distress" Taylor's actions caused, their suit reads.

In a video that Taylor posted online after the incident, which featured footage of him while taking a bath, Taylor addressed his behavior during the King Day parade.

"I know y'all disappointed in me. I'm sorry if I let anybody down or hurt anybody," he said. "I make mistakes too."

That civil suit, filed in 2016 in Judge Alice Gray's courtroom, is ongoing, as is another case stemming from a second-degree battery charge for a skull-fracturing punch that Taylor delivered to Jason Isaac Condon while the two were in a rehabilitation program together in 2015, according to reports.

Condon's suit seeks compensation for medical expenses, injuries and mental anguish. A pretrial hearing for that case is scheduled for October.

TIMELINE: The crimes of Jermain Taylor