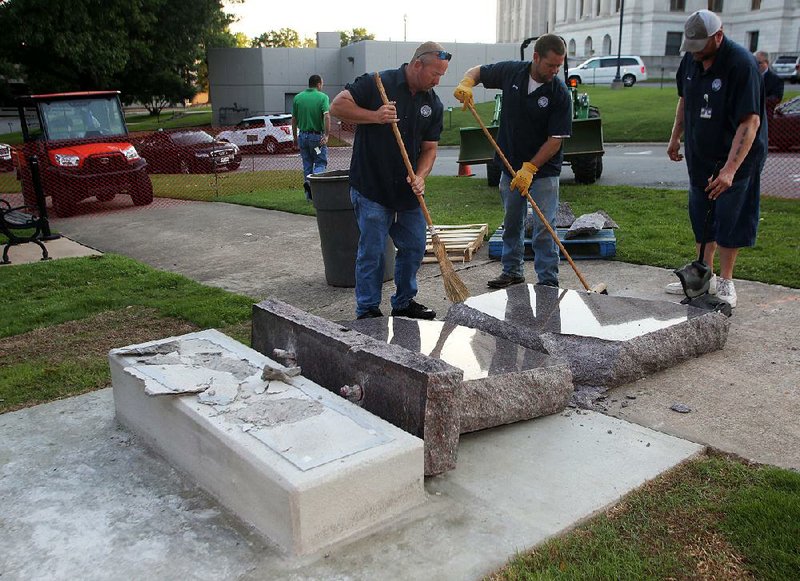 Secretary of state workers start cleanup Wednesday around the smashed Ten Commandments monument that was just installed on Tuesday.

Less than 24 hours after being installed on the state Capitol grounds, a 6-foot-tall Ten Commandments monument was toppled Wednesday when a 32-year-old Arkansas man drove a vehicle into it, according to police reports.

Chris Powell, a spokesman with the secretary of state's office, said he was called early Wednesday and told that a man had driven a vehicle through the monument. That driver -- identified in an arrest report as Michael Tate Reed of Van Buren -- was arrested by Capitol Police shortly after, Powell said. Reed apparently streamed the destruction live on Facebook, officials said.

Reed was previously accused of destroying a Ten Commandments monument in Oklahoma, according to news reports.

The destruction of the Arkansas monument put at least one planned lawsuit on hold until the statue is rebuilt. Plaintiffs must show that they are being harmed in order to prevail in a lawsuit.

"As far as our lawsuit goes, I believe we have to postpone it," said Lucien Greaves, a co-founder of the Massachusetts-based Satanic Temple. "I believe it takes our standing away. Our plaintiff hadn't even seen the monument yet at the time [the suspect] ran it over. Of course, if they put the monument back up, then we will sue."

The American Civil Liberties Union of Arkansas condemned the destruction but did not respond to requests for comment about whether it had legal standing to proceed with its planned lawsuit. The organization had said it would wait until the monument was installed to file suit.

Sen. Jason Rapert, R-Conway, who sponsored the 2015 legislation to erect the monument on Capitol grounds, told reporters at a news conference Wednesday that a new statue has already been ordered. He called on elected officials to take a stand against violence and against people "using weapons to destroy things" based on differences in viewpoints.

According to the arrest report, about 4:45 a.m. Wednesday, an officer spotted a dark-colored vehicle "start from a stopped position and ram the Ten Commandments monument."

"I immediately exited my vehicle and placed the subject in custody," Cpl. Chad Durham wrote, noting that Reed was first taken to a local hospital and then booked into the Pulaski County jail.

Reed, who was in jail shortly after 7:30 a.m., faces charges of defacing objects of public respect, trespassing on Capitol grounds and first-degree criminal mischief, according to the report. He was being held without bail pending an initial court appearance.

It was "absolutely" a shock to get the call about what happened, Powell said.

"We had some concerns, just because this was such a highly charged issue with some people," he said.

Rapert said, "That's the same hatred, that's the same motivation that motivates somebody to put on a mask and take a bat and go to a college campus and attack somebody who is standing there exercising their free-speech rights."

Rapert said the new statue could be paid for with insurance money or new donations. The new monument, which will be a copy of the toppled one, might be protected by steel posts surrounding it, he said.

"There is no intent for anybody to use taxpayer funds," he said.

Investigators believe that Reed recorded himself as he drove into the statue, the secretary of state's office said.

In a Facebook Live video to an account under the name Michael Reed, a driver appears to shine his headlights on the monument and shouts, "Freedom!" as he drives toward it. As the vehicle hits the granite, the video cuts out.

In another Facebook video posted early Wednesday, a man who called himself Michael Reed describes his beliefs in both Jesus and the separation of church and state. He spoke from a seat in a 2016 Dodge Dart.

"I'm a firm believer that part of salvation is that we not only have faith in Jesus Christ but we obey the commands of God, and that we confess Jesus as Lord," he said in the video. "But one thing I do not support is the violation of our constitutional right to have the freedom that's guaranteed to us, that guarantees us the separation of church and state."

There's "no one religion" that the government should represent, the man said.

In a different video posted earlier, the same man said he had to "confess my sin."

"I made a promise that I very much intended to keep that I would go get help if things didn't happen the way I thought they would," he said.

Later, he added: "I'm taking a sabbatical. I'm going to go. I'm leaving this place, and I'm gonna see God more and just trust in him."

The man also described interactions with police and medical personnel before Wednesday morning's wreck. He said in a Facebook post that if his plans were not carried out the way he wanted, he would return to a hospital.

On Oct. 24, 2014, a then-29-year-old Michael Tate Reed was accused of ramming his truck into a Ten Commandments statue of a similar design at the Oklahoma Capitol in Oklahoma City, the Tulsa World reported.

Authorities said he also made threats against President Barack Obama, lit money on fire and walked into a federal building to spit on pictures, the newspaper reported.

Reed was diagnosed with schizoaffective disorder, the World reported. Reed was released from Norman's Griffin Memorial Hospital in January 2015 under an agreement with the Oklahoma County district attorney's office for continued treatment and therapy.

In an email to the World, Reed described how voices in his head became his norm and he apologized for running into the statue, the World reported.

"I am so sorry that this all happening and wished I could take it all back," Reed wrote, according to the World.

During Wednesday's news conference, Rapert said he has been supportive of mental health issues in Arkansas.

He did not participate in a vote to authorize Mental Health Crisis Stabilization Centers under Act 423 of 2017, according to legislative records.

If Reed is mentally ill, Rapert said he hopes he receives help. He also said he wants Reed to be prosecuted to the fullest extent of the law and that the attack appeared to be planned in advance.

Rapert said a variety of organizations are "culpable" but not "responsible" for the destruction of the Ten Commandments monument.

"My No. 1 goal today is to ask people to think about this country and where we live and what we want it to be like," he said. "I don't want my children or your children or your families to live in a country where people take up violence against each other simply because they have a disagreement. That's not what America was founded on."

He said the ACLU of Arkansas, Satanic Temple, some members of the media and others were "culpable."

"I expect the Arkansas Democrat-Gazette and our newspaper media in this state to deliver news. When they use their columns to berate, belittle and intimidate people in their columns -- using language that isn't appropriate -- you have to understand that has the ability to foment hatred that is carried out in acts that you've seen here today," he said.

"You can't light a fuse and walk away and say you're not responsible for the explosion. We all have a responsibility to use language that is befitting our offices that we hold, and also befitting the roles that we play in society."

The ACLU of Arkansas denounced the monument's destruction.

"We strongly condemn any illegal act of destruction or vandalism," Rita Sklar, executive director of the group, said in a statement. "The ACLU remains committed to seeing this unconstitutional monument struck down by the courts and safely removed through legal means."

And Greaves, co-founder of the Satanic Temple, said he was familiar with Reed because of the incident in Oklahoma.

"When this happened in Oklahoma, they immediately started saying that he was a Satanist, and then it turned into this narrative, 'Well, he claimed the devil made him do it.' And the politicians in Oklahoma continued referring to this guy as a Satanist well after it was very clear that he considered himself a born-again self-described Jesus freak," he said in an interview.

"I want to be clear. We don't celebrate the monument being vandalized or destroyed in this way. It'll surely come down, but it can and should be taken down by legal means."

Cleaning up the pieces

The broken pieces of the granite monolith were visible inside a taped-off area near the walkway to the Justice Building before 7 a.m. Wednesday. Tire tracks were visible in the grass on the western side of the small slope on which the statue sat.

Capitol crews later worked to clean up the chunks of granite. One employee drove a John Deere tractor as three other men discussed how to hoist one of the larger broken blocks onto a wooden platform to be hauled away.

A few people driving by pulled over to take photos and shout questions out of their car windows.

Rapert, who told a reporter Tuesday that he wanted to help install more Ten Commandments and "In God We Trust" monuments around the country, vowed Wednesday to press forward.

"They've inspired us," he said of organizations planning to file lawsuits. "We want to put up monuments in every state, every county, every city and every town. And every organization that wants one, we're going to help them do that."

"You come at us with your hatred. We come at you with our freedom," he said.

Information for this article was contributed by Brandon Riddle of Arkansas Online; and by staff members of The Associated Press. 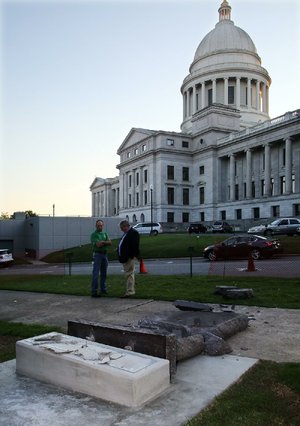 Photo by Special to the Democrat-Gazette
The Ten Commandments monument lies in pieces beside its base Wednesday morning at the state Capitol. Backers said a replacement monument is already on order. 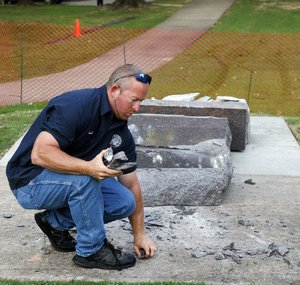 Photo by Special to the Democrat-Gazette
A member of the secretary of state’s staff picks up pieces of the Ten Commandments monument Wednesday at the state Capitol. Tire tracks show where a car plowed into the monument before dawn. 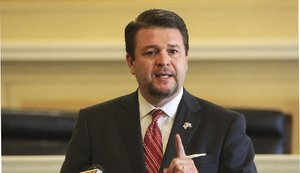 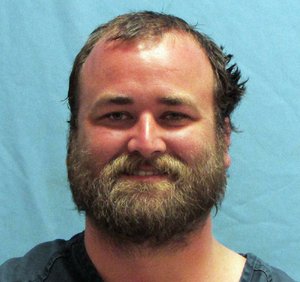