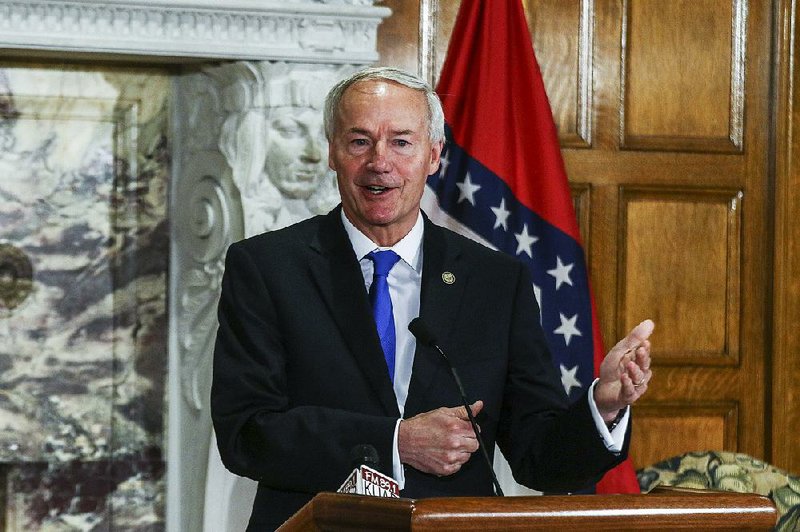 Gov. Asa Hutchinson talks about his suggestions to improve the federal health care bill during a news conference Thursday at the Capitol in Little Rock.

Gov. Asa Hutchinson suggested Thursday that the federal health care bill should be revised to preserve more federal support for Medicaid and other subsidies to help low-income people buy coverage, even as top Senate Republicans in Washington discussed ways to rewrite the bill to make it passable.

In Washington, Senate Majority Leader Mitch McConnell of Kentucky and other leading Republican lawmakers huddled privately in hopes of producing a revised bill before a self-imposed deadline today.

"That's our goal," said Sen. John Cornyn of Texas, the majority whip, as he left the session. "We're plowing ahead, inch by inch, yard by yard. We're not there yet, but we continue to talk."

Also in play was a proposal from conservatives to let insurers offer any plans they'd like, including ones with skimpy benefits and low premiums. To do so, a company would also have to sell policies that abide by the consumer-friendly coverage requirements Obama's health care overhaul imposes on insurers.

Both proposals faced internal GOP opposition and procedural hurdles, and it was unclear whether either idea would survive.

Republicans said party leaders did agree to add some funding aimed at winning support from moderates: $45 billion for battling opioids abuse over 10 years.

In a Little Rock news conference Thursday, Hutchinson said that without the changes he suggested, the Better Care Reconciliation Act would result in a "massive cost shift" as it phases out enhanced federal funding that has gone to states such as Arkansas that expanded their Medicaid programs.

"The state of Arkansas could not absorb that additional investment that would be required to maintain the coverage for 300,000 Arkansans" covered under the expanded part of the state's Medicaid program, Hutchinson said. "And so we would have to make dramatic changes based upon that reduced federal participation."

The activity in Washington underscored that party leaders were stepping up efforts to craft a new health care bill, two days after McConnell postponed a vote on an initial version because conservative and moderate GOP senators were prepared to block it.

Under the 2010 Patient Protection and Affordable Care Act, the federal government is paying 95 percent of the cost, and 94 percent next year, for people covered under Medicaid expansion in Arkansas and other states.

For the fiscal year that starts Saturday, Arkansas' share is projected in the state budget to be $109 million, with the federal government providing the remaining $1.7 billion.

The Affordable Care Act calls for the states' share to increase every year until it reaches 10 percent in 2020.

The Senate bill, designed to deliver on a promise by Republicans to repeal the 2010 law, calls for the state share to go back up, starting in 2021, until it reaches the percentage of costs the state pays for other Medicaid recipients in 2024.

In Arkansas, that means the state share would rise to 30 percent.

The Senate bill would also cap the growth of spending in the traditional Medicaid program, scale back subsidies that help low-income people buy coverage and repeal taxes on insurers, drug companies and high-income taxpayers.

Retaining the tax would preserve $172 billion in revenue over 10 years. Moderates want to use that money to make the health care subsidies their bill would provide more generous.

"Obviously we'd like to get rid of all" Obama's tax boosts, No. 3 Senate GOP leader John Thune of South Dakota told reporters. "But if it takes something like that to get our members on board to move this process forward, I think we have to consider that."

"The more you do this, the more it's like Obamacare," Sen. Lindsey Graham, R-S.C., said. "So eventually you'll cross a line where saying you've repealed or replaced Obamacare will be hard to say with a straight face."

The nonpartisan Congressional Budget Office said erasing Obama's tax increases would cost the government $700 billion over the next decade, while the cuts to Medicaid and other provisions in the law would increase the number of people who lack insurance by 22 million.

Hutchinson declined to say whether the Senate bill should preserve any of the Affordable Care Act's taxes, but he said it should allow states to keep enhanced funding for Medicaid expansion.

The money should be available to states that take advantage of an option, created under the Senate bill, to accept their federal Medicaid funding through a block grant, he said.

Hutchinson also said Medicaid for the elderly and disabled should be exempt from the cost caps included in the Senate bill.

And he said Congress should also preserve more funding for tax-credit subsidies that help pay for coverage for low-income people who don't qualify for Medicaid.

"If the subsidy is not sufficient in the marketplace, then that individual who loses coverage under the Medicaid program will make the decision, I can't afford it, and will ultimately end up with lost coverage," Hutchinson said.

He said he has passed along his recommendations to Arkansas' senators, John Boozman and Tom Cotton.

Hutchinson "has presented us with his concerns and Senator Boozman and Cotton have been discussing those with Senate leadership," Patrick Creamer, a spokesman for Boozman, said in an email. "Senator Boozman and his colleagues are continuing to meet this week to try to overcome their differences and revise the plan.

"There are lots of moving parts at the moment, so he doesn't want to get ahead of the discussions, but he hopes though that these yield a revised version that can be sent to CBO by the end of the week."

Cotton "has communicated with Governor Hutchinson throughout this process and as the debate unfolds that dialogue will continue," Cotton spokesman Caroline Rabbitt said in an email.

Neither senator had taken a public position on the bill as of Thursday.

The added opioid funds, which would be provided over a decade, were described by people who spoke on condition of anonymity because they weren't authorized to discuss private negotiations.

McConnell is hoping the money will help win over moderate GOP senators like Rob Portman of Ohio and Shelley Moore Capito of West Virginia. Their states are among many battered by rising death tolls from drug use, and they've been pushing for the funds.

The accelerated pace of closed-door Republican bargaining came with McConnell hoping to have a new version of the measure -- with enough backing to pass it -- by week's end.

His problem has been that the bill will die if just three of the 52 GOP senators oppose it, and the number of Republicans who have publicly said they would vote no or have raised serious questions has reached double digits.

McConnell wants the Senate to approve the bill shortly after returning in mid-July from an Independence Day recess. Several senators have scoffed at that timetable, with Sen. John McCain, R-Ariz., saying, "Pigs could fly."

Information for this story was contributed by Alan Fram and Erica Werner of The Associated Press, Lisa Mascaro of the Tribune Washington Bureau and by Andy Davis of the Arkansas Democrat-Gazette.