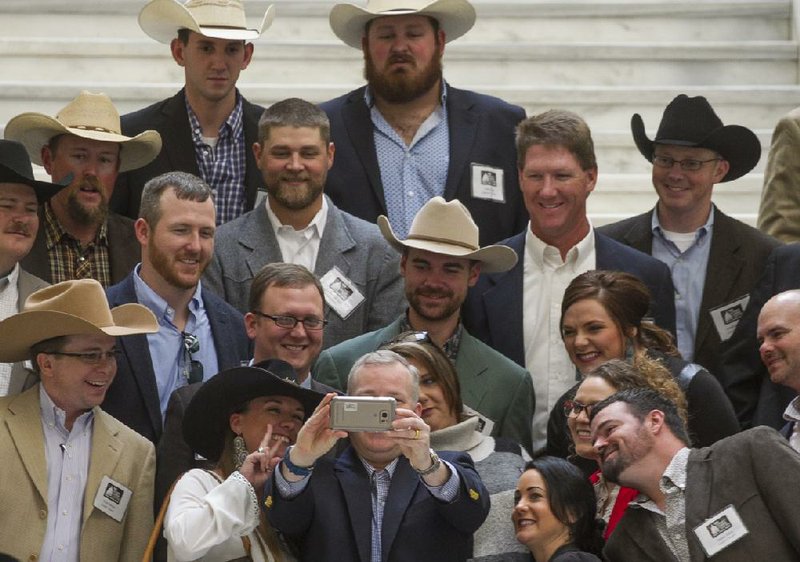 Members of the Arkansas Cattlemen’s Association pose for a picture Wednesday with Lt. Gov. Tim Griffin (holding phone camera) during a tour of the state Capitol. Griffin has been interviewed as a possible candidate for Army secretary and is definitely in the running, according to U.S. Sen. Tom Cotton.

Since then, senior advisers to President Donald Trump have met with the Little Rock Republican, inviting him to Washington, D.C., for interviews.

The administration hasn't revealed when the post will be filled and isn't commenting on Griffin's chances.

"We don't have any announcements at this time about the secretary position," a presidential spokesman said.

Griffin, who represented central Arkansas' 2nd Congressional District for two terms, confirmed Wednesday that he'd been interviewed but said he doesn't know what the outcome will be.

Griffin, a lieutenant colonel in the Army Reserve, has worn a uniform for more than two decades and is pursuing a master's degree at the Army War College.

In an interview this week, U.S. Sen. Tom Cotton said Griffin is definitely in the running.

"I've spoken with White House officials and I know that they are taking a close look at Tim for the position, and I've encouraged them to do so," the Republican from Dardanelle said.

"I think our troops would be in good hands with Tim Griffin as the secretary of the Army. He is a former congressman. He is an Iraq War veteran; he continues to serve in the Army Reserve, so he has a special appreciation for the needs of our soldiers and the needs of our Army," Cotton said.

If nominated, Griffin would need to to be confirmed by the U.S. Senate.

"The secretary of the Army is an incredibly important job. The Army has a larger budget and more people than most Cabinet positions," Cotton said. "Soldiers who are stationed around the world, or preparing to deploy, deserve a seasoned, competent, serious secretary of the Army."

That's what Griffin would be, Cotton added.

The administration's original pick, billionaire Vincent Viola, withdrew from consideration Feb. 3 after struggling to separate himself from his extensive business holdings.

The Arkansan said yes and on Feb. 7 met with Trump administration officials in Washington.

As a lawmaker, Griffin served on the House Armed Services and Foreign Affairs committees, among others. He also worked in the White House during the George W. Bush administration, later serving as the interim U.S. attorney for the Eastern District of Arkansas.

"I am not in search of another job. I love my current job. But, obviously, when you get a call from the White House, you pay attention," he said. "[It would] be an honor to serve the president."

Print Headline: White House gives Griffin a look to be secretary of Army