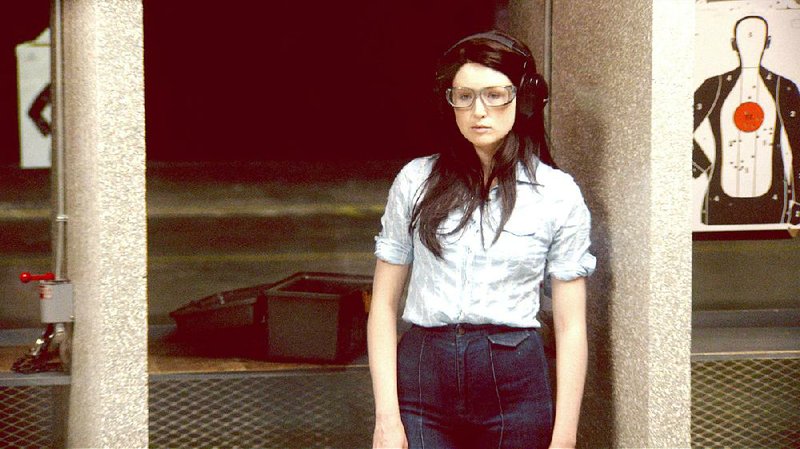 Peter Finch won a posthumous Oscar in Sidney Lumet's Network for playing a fictional news anchor who threatened to shoot himself on the air. Since 1976, America has known about Howard Beale and his refrain of "I'm mad as hell, and I'm not going to take this anymore!"

"Probably only 500 people saw Christine Chubbuck commit suicide total," says Robert Greene, the documentarian who directed Kate Plays Christine, which was released on DVD earlier this week. "The first draft of Network was written (by Paddy Chayefsky) before Christine Chubbuck killed herself. There was another draft later that had her as a story point, and the final film was influenced by what was known about Christine Chubbuck."

Chubbuck now has two movies of her own, and both played at Sundance last year. Christine stars British actor Rebecca Hall as the anchor, while Greene (Fake It So Real, Actress) enlisted actor Kate Lyn Sheil (You're Next, V/H/S, Listen Up Philip) to examine her life by filming her as she prepares to play the troubled newswoman in Kate Plays Christine.

Greene's film not only features Sheil in re-enactments of Chubbuck's life, but it also has recollections from people who knew her.

During a conversation at the True/False Film Festival in Columbia, Mo., last year, Greene says that much of the reason Chubbuck's story has only now gained public attention is that, while her death made national news, only a few people saw the fatal broadcast. He attributes the fictional Beale's greater fame to the "Hollywood reproduction machine."

According to Vulture.com, the only recording of the suicide is now in the hands of a law firm selected by Mollie Nelson, the widow of WXLT owner Robert Nelson. In re-creating the moment and even simply trying to figure out how Chubbuck came across on camera, Greene and Sheil had very little footage of her to consult. Many stations recorded over used videotape, and many live shows disappeared once they were broadcast.

"In 1974 in Sarasota, Fla., in that TV station, it was the last time in history and the last place in history almost where something would have been on live television and not been proliferated massively because in 1978 people started recording all the time and then video had really changed newsrooms. By '82, there was VHS, and there were VCRs everywhere," Greene says.

Before she pulled the trigger, Chubbuck announced, "In keeping with Channel 40's policy of bringing you the latest in 'blood and guts', and in living color, you are going to see another first -- attempted suicide."

While Christine and Kate Plays Christine examine how "if it bleeds it leads coverage" led to her fateful decision, other factors may have been in play.

Sheil also says Chubbuck's sex contributed to her relative obscurity and added to her frustration. Chubbuck had had an ovary removed and had suffered from a type of depression. Neither condition was part of polite conversation at the time.

"You think of the stigma for it, and the gender thing is huge because this kind of behavior is more comfortable coming from a man. It was something you could digest more easily, especially at that time," she says.

If a psychological examination of Chubbuck is impossible, Greene instead has Sheil replicate some of Chubbuck's working conditions, like the tight deadlines (Kate Plays Christine was assembled in about three weeks) and the "every expense was spared" sets.

"Christine was a young woman who was incredibly invested and incredibly intelligent, but she was still finding her craft," Sheil says. "I've only seen one tape of her so I don't know for sure, but that sort of opened something up for me where she was just trying to like get her foothold as well."

Sheil discovered that Chubbuck's alleged difficulty with interviews was easier to understand by trying to conduct a few in the film.

"I shy away from tension in that way if I'm making someone uncomfortable. It's a question of practicality in filmmaking in general because you don't have to talk with me. That's when I think (Greene was) the most frustrated with me and when I was the most frustrated with (Greene). It was sort of an actor of aggression to go, 'No. I'm done. No more questions,'" she recalls.

Sheil was born nearly a decade after Chubbuck died, but Greene says that trying to make sense of her brief life was still irresistible four decades later.

"I have no idea if that's a good idea," Greene admits. "The attempt to narrative-ize is a totally natural thing. We try to create this character, so we can put that character away. What does this speak to with large amounts of people? That's the same thing with suicide. Someone kills themself, that's what you do. If I can just explain it, can put this away, and it's not a direct challenge to me and my survival instincts that are in my cells."

"That's a great deal about what our film is grappling with, whether or not it is a good idea," Sheil says. "We're more interested in asking questions instead of giving answers. Certainly the message she tried to deliver along with her suicide was very prescient and more relevant now than ever before. Also, she was a very complicated person, and our film tries to grapple with those questions rather than give answers."