Jimmy Dykes out as Arkansas coach 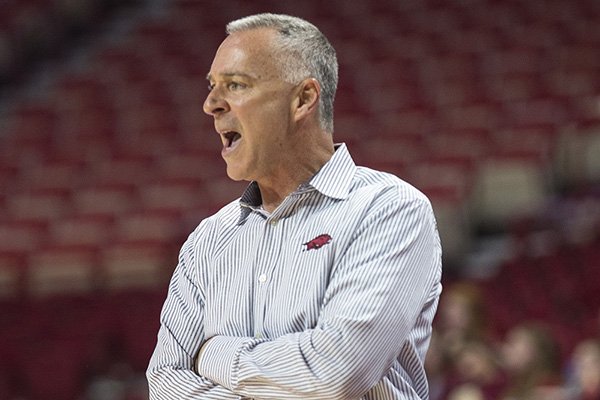 Arkansas coach Jimmy Dykes watches during a game against Auburn on Sunday, Feb. 26, 2017, in Fayetteville.

FAYETTEVILLE — Jimmy Dykes, who earlier this week said he had no plans to do anything but continue coaching the Arkansas Razorbacks women’s basketball team, resigned Friday after a 13-17 season that included a 2-14 conference record, the program’s worst since joining the SEC.

Multiple sources said Dykes met with Athletic Director Jeff Long early Friday afternoon and then with his team at 4 p.m. to inform the players of his status.

Dykes’ three-year record was 43-49 overall and 16-36 against SEC competition, including tournament games.

Dykes received a two-year extension to his original four-year contract after taking the Razorbacks to the NCAA Tournament in his first season, 2014-2015.

“It was a tremendous honor to be the head coach at my alma mater for the past three years,” Dykes said in a statement. “I know in my heart that God moved me into this position and I trust 100 percent that he is now moving me forward to something different.

“I will forever be a Razorback and want nothing but the best for this program and the University of Arkansas going forward.”

Arkansas ended on an 11-game losing streak, finishing with a 71-61 loss to Florida at the SEC Tournament on Wednesday. The Razorbacks were last in the 14-team SEC.

Dykes told the Arkansas Democrat-Gazette earlier this week, before the loss to Florida, that he was not happy at all with the team’s record, but also said he was not discouraged with the progress the program had made.

Arkansas won its first 9 games but was 4-17 in its final 21 games. The Razorbacks’ offense struggled after conference play began and finished the year ranked 11th in the SEC in scoring and 13th in field goal percentage. The team scored 53 points or less in seven conference games.

No Arkansas player made the postseason all-SEC first or second teams and the majority of Arkansas’ players were freshmen or sophomores. Senior Jessica Jackson had been a three-time all-conference performer, but finished with a career-low 14.7 points per game average and was suspended for the Razorbacks’ game at Alabama in January.

Earlier this week, Dykes said he was encouraged about the team’s prospects because of so many returning players, including guard Jailyn Mason, a member of the SEC’s all-freshman team.

It was a trying season on and off the court for Dykes’ Razorbacks.

His team made headlines in the preseason when six players took a knee during the playing of the national anthem before an exhibition game against Oklahoma Baptist. The decision to kneel later was described as a protest toward a legal system that unfairly targeted racial minorities.

The protest drew sharp criticism from many Arkansas fans toward the players and Dykes, who publicly supported his players’ freedom of speech. Two of the six quit the team during the season and another quit basketball altogether because of a health issue.

In the most high-profile case, sophomore guard Jordan Danberry — a former Arkansas high school player of the year at Conway — quit six games into the season and later transferred within the SEC to Mississippi State.

“If she wants to play in the SEC or one of the nonconference teams we have scheduled next year, then we have to figure out how to guard her when that happens, I guess,” Dykes said last November when asked why he didn’t put restrictions on Danberry’s transfer.

Dykes was hired in March 2014 by Long to replace Tom Collen, who was fired after recording a 132-90 record in seven seasons.

Dykes, a former men’s assistant under Eddie Sutton at Arkansas, Kentucky and Oklahoma State, had not coached at any level since 1991, had no head-coaching experience and had never coached the women’s game.

“Arkansas’ decision to hire someone who has not coached basketball in 23 years is disappointing to the multitude of more-than-qualified coaches who are members of our association,” said Beth Bass, CEO of the Women’s Basketball Coaches Association at the time.

Arkansas made the NCAA Tournament in Dykes’ first season and beat Northwestern in a first-round NCAA game in Waco, Texas. The Razorbacks finished 18-14 that season but regressed to 12-18 last season. Dykes never had a winning record in SEC play.

“I am appreciative of the effort Jimmy has demonstrated over the past three years to our program,” Long said in a statement. “…I wish him all the best in his future endeavors.”

Dykes spent 19 years as an ESPN on-air college basketball analyst before taking the Arkansas job. He indicated earlier this week that he wasn’t interested in returning to that profession.