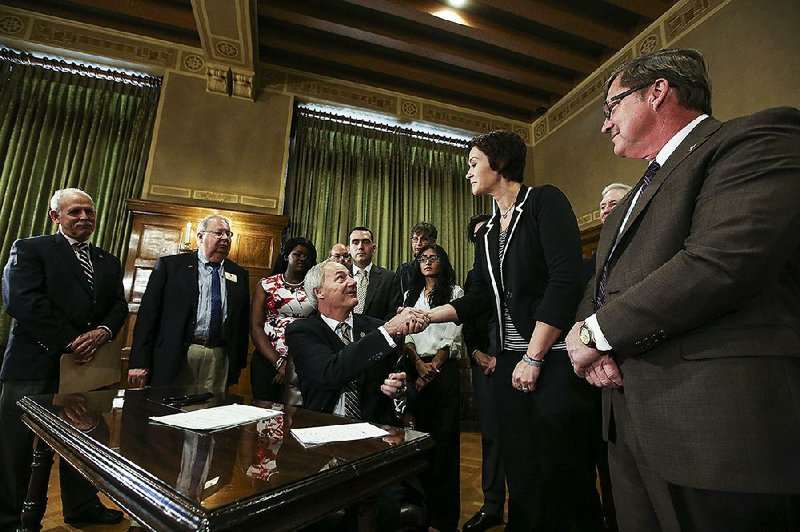 It will use $9 million a year in general revenue that now goes toward two existing grant programs -- the Workforce Improvement Grant and the Higher Education Opportunities Grant.

The new grant program will pay tuition and mandatory fees for a student to attend any Arkansas public two-year college or technical school. It will be available to students studying in high-demand fields -- like computer coding, nursing or welding.

The old programs had low completion rates. The new program requires mentors for students, who will have to stay in Arkansas for at least three years after they graduate or pay the state back for their educations.

"I think it'll have a far-reaching impact," Hutchinson said.

The bill had initially failed in a deadlocked Senate committee after Sen. Alan Clark, R-Lonsdale, joined three Democrats in voting against the bill.

At the time, Clark was concerned that the bill limited school choice by exempting private schools. He said Thursday that he met with higher-education officials and the "perfect cannot be the enemy of good."

Sen. Joyce Elliott, D-Little Rock, had initially voted against the bill because she had been concerned about the exclusion of Little Rock's three private historically black campuses -- Shorter College, Philander Smith College and Arkansas Baptist College.

Higher-education officials had said private colleges were excluded because they are typically more expensive and the money would benefit more students at public institutions.

Elliott said Thursday that she met with Hutchinson about finding additional funding for struggling colleges. She said specifics about where the funds might go had not been worked out.