Airwaves static blamed on growers’ use of cheap ballasts by MARINA VILLENEUVE The Associated Press | March 5, 2017 at 1:49 a.m. 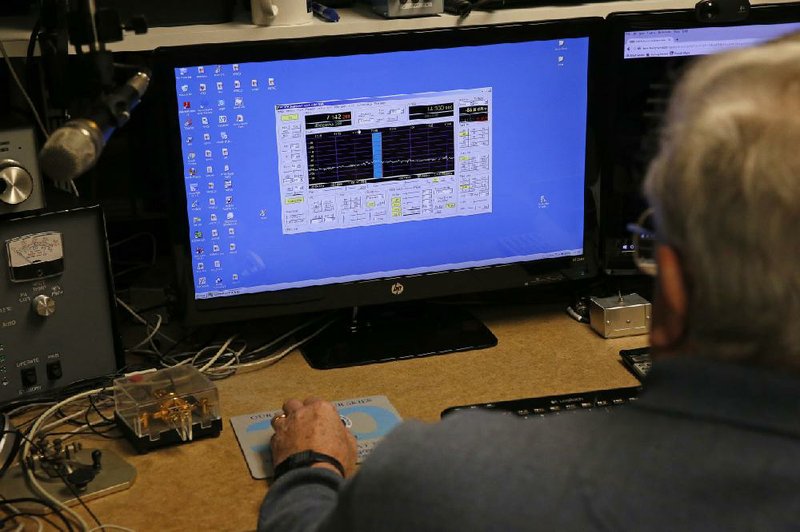 Lifelong ham radio operator and expert tinkerer Tom Thompson, looks at a representation of radio waves on his computer last month, inside his basement home office, where he operates a ham radio and other devices, in Boulder, Colo.

Amateur radio operators say the legalization of marijuana is creating a chronic nuisance thanks to interference caused by electrical ballasts that regulate indoor lamps used to grow marijuana.

The American Radio Relay League wants the Federal Communications Commission to take a stand against devices that give off much more interference than federal law allows in homes.

Ham radio operators generally say they don't have a problem with pot but worry that amateur growers may not be aware that cheap ballasts can have phony FCC-compliance stickers. The operators point out that they serve as backup communication during emergencies -- but concede that it's unlikely any lighting devices would still be on if the power went out.

Johnson, one of the radio league's 166,000 members, said he worries that interference will only become a bigger inconvenience in years to come in Maine, which recently made it legal for a person to grow up to six flowering marijuana plants, 12 immature plants and unlimited seedlings.

When he recently heard suspicious noisy static, Johnson said, he drove up and down side streets with a spectrum analyzer hooked up to his laptop to determine the source, which turned out to be a licensed grower a mile away who said he had no idea he was causing a disturbance.

"My prediction is that as more and more states legalize marijuana, the number of growers is going to increase exponentially and overwhelm the FCC's ability to regulate it," he said.

The American Radio Relay League has filed four complaints with the FCC and said it hasn't heard back, and says complaints concerning alleged interference continue to trickle in, particularly in Colorado and California. Cultivation of recreational marijuana is also now legal in Maine, Massachusetts, Oregon, Alaska, Washington state and the District of Columbia.

Will Wiquist, an FCC spokesman, said the agency takes all interference issues seriously and sends warning letters after receiving complaints about unlawful interference, including from lighting. He declined to comment further.

Grow lamps are distinctive because they power on and off for 12 hours at a time, and marijuana grow lighting can be powerful enough to produce the same amount of radio interference as a 1,000-watt AM radio station, said Bill Crowley, the Maine section manager of the Radio Relay League.

One inexpensive ballast sold by big-box retailers produced 640 times the level of interference of a legal unit, said Mike Gruber, the league's resident radio interference expert, who did the test.

The interference often sounds like the kind of harsh, grating static generated by a lightning strike -- except it doesn't stop, said Tom Thompson, an amateur radio operator in Boulder, Colo.

Thompson said he has dealt with independent pot growers causing interference six times. Given the weak federal enforcement and declining FCC manpower, he said, he has created his own solution: a filtering device that almost eliminates the static by suppressing interference from noncompliant ballasts.

"Some won't cooperate, but most do," he said. "I go to their places and give them a filter and give them instructions how to install it."

In Maine, Johnson wants legislators to get the state to step in and ban ballasts that produce radio frequency noise extending beyond the user's property. Out-of-compliance ballasts could be refunded or replaced with a unit that doesn't produce noise, he suggests.

Several legislators said such a move would likely pre-empt federal law, and a committee recently voted to kill such a bill. Other ham radio operators say the federal government should do its job.

Education might be the answer and could make growers more aware of the need to use ballasts approved by the FCC, said Erin Worthing, of Cape Elizabeth, Maine, a recreational marijuana caregiver.