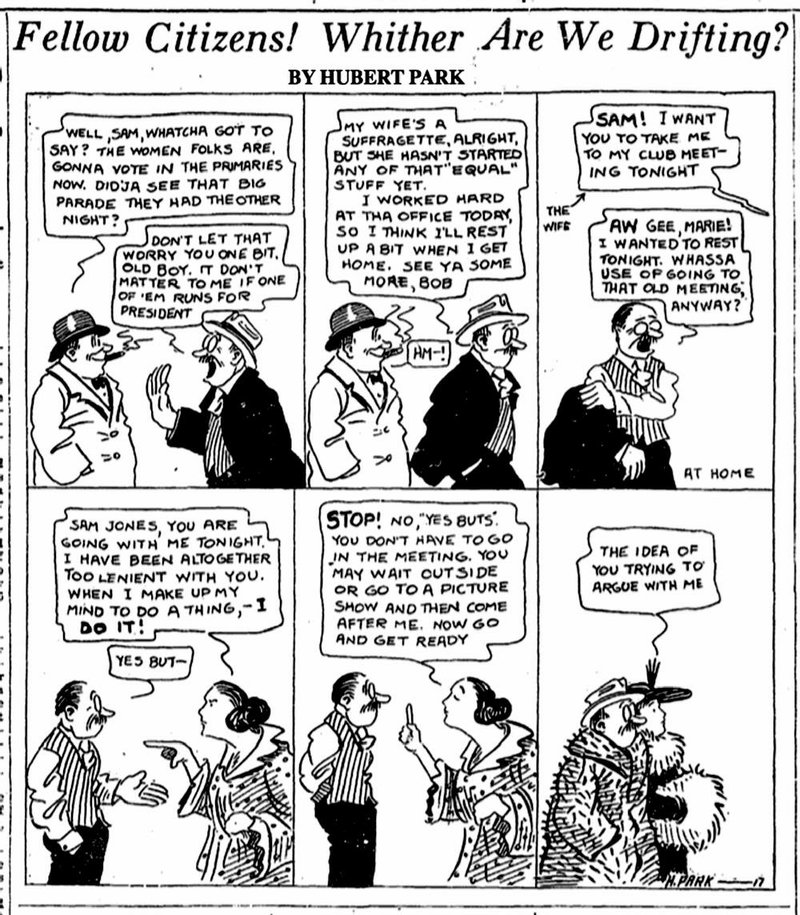 This cartoon by Hubert Park of Little Rock appeared on Page 1 of the March 8, 1917, Arkansas Gazette — two days after Gov. Charles Brough signed the act granting women the right to vote in political primaries.

Today Old News encounters yet another centennial of women's voting rights in Arkansas.

One hundred years ago today, before a packed hall in a once-famous Little Rock hotel, Gov. Charles Hillman Brough signed Act 186 of 1917, granting women the right to vote in political primaries. March 6, 1917, was a happy day for suffragists, including Rep. John A. Riggs, who proposed the bill in the House.

Before we get busy quoting the old Arkansas Gazette's account of exactly how happy everybody was, a few things to know:

• Not everybody was happy. In my Feb. 27 Old News, we saw how Speaker Lee Cazort prevented aginners in the House from sabotaging the women's suffrage bill while the members jostled and howled in a "wild scene."

Cazort ramrodded the House acceptance of three amendments that state senators had added to the bill while they approved it. He then ordered the bill "engrossed," meaning an official version including the amendments would be made. All that remained was for the formal House vote on whether to pass it. Cazort scheduled that for his chamber's next bill-passing session, which happened to be "Senate day." Each week, the House had a Senate day for passing bills that came down from the Senate and a House day for passing bills originating in the House.

Under the state Constitution of 1874, passing a bill required a roll-call vote, with members' ayes and noes recorded.

On that fateful Senate day, "no" voters made one more, last-ditch attempt to block the bill. Their calls on various points of order were overlooked or overruled, and "much confusion ensued for half an hour, causing a difference of opinion on what happened," the Gazette reported. But the bill passed, 56 to 28, with 16 not voting.

C. Butler pronounced it "Bruff." Butler knew Brough well, having worked as a young lawyer at the firm of Robinson, House, and Moses, where Brough was a frequent presence. Governor Bruff it is.

• Reps. Josiah Hardage of Clark County and William Jayson Waggoner of Lonoke County were chief among the anti-suffragists.

• Brough was pushing for a constitutional convention to rewrite the Constitution of 1874; one would meet in 1918, and it would fail.

• "Suffrage school" was a two-day seminar on citizenship for women March 5-7, 1917. Although $5 was charged in other states, Arkansas women who registered for the whole program attended for free, with walk-ins paying 25 cents per session. More than 100 women enrolled, according to the Gazette.

"Passage of the Riggs bill permitting women to vote in primaries in Arkansas was celebrated with great enthusiasm at a suffrage mass meeting at the Hotel Marion last night. The climax was reached when Governor Brough signed the bill at the end of his stirring address on woman suffrage. The big convention hall was filled to overflowing.

"The mass meeting was the principal event of the suffrage school under the auspices of the National American Woman Suffrage Association. The school will close at the Little Rock Public Library today.

"Before the mass meeting an automobile parade and demonstration was held downtown. Led by a drum corps the long line of gaily decorated automobiles filled with elated suffrage workers left Capitol avenue and Main street at 7:15.

"Mrs. O.F. Ellington, president of the Little Rock Political Equality League, opened the meeting and introduced Representative John A. Riggs of Garland county, who introduced the bill in the Legislature. Mr. Riggs spoke briefly of his pleasure in the passage of the measure, and praised the suffrage workers for their support.

"Governor Brough in his address said that he deemed it a great honor to sign the measure and predicted that the constitution framed at the constitutional convention will contain a clause granting full suffrage to women. He promised his support of it and said: 'Regardless of whether I ever hold the office of governor again -- and I would rather be a good governor for two years than a mediocre one for four years -- I am going before the people and urge the ratification of a new constitution granting full suffrage to women.'

"The true measure of greatness in a state, he said, is not its wealth but its progress in moral, social and educational development. The move toward full suffrage, he said, is a step forward in development of the state.

"Charles T. Coleman urged the women to appreciate the responsibilities of suffrage. 'There has been an alarming decadence,' he said, 'in the ideals of public officials, due in part to the taint of modern commercialism, and largely to apathy on the part of the electorate. People now think too much of what they can get out of government instead of what they should put into it.'

"'The world no longer asks if woman is entitled to the ballot,' he said, 'but what she will do with it after obtaining the privilege.'

"Miss Ann Doughty of New York, an instructor for the national association, congratulated Arkansas for being the first state in the South to grant suffrage. She urged organization to make good voters.

"Mrs. Halsey W. Wilson of White Plains, N.J., said the suffrage movement has assumed the proportions of an epoch in the country's history and predicted nationwide suffrage within five years. The suffrage school here, she said, has been one of the most successful in the national association.

"Mrs. T.T. Cotnam of Little Rock made a patriotic address on the future of the movement, reviewed some of the steps in its growth and paid tribute to the pioneer workers. The women of the country, she said, are willing to do their part at all times in public affairs and would respond nobly should the country be hurled into war.

"The suffrage school will close this afternoon at the library. During the day, Mrs. Cotnam, Miss Doughty and Mrs. Wilson will discuss organization of suffrage work, history of the movement and publicity methods."

Next week: Miss Kellerman Will Have to Wear Clothes

Print Headline: Woman's place was at polls as of 1917