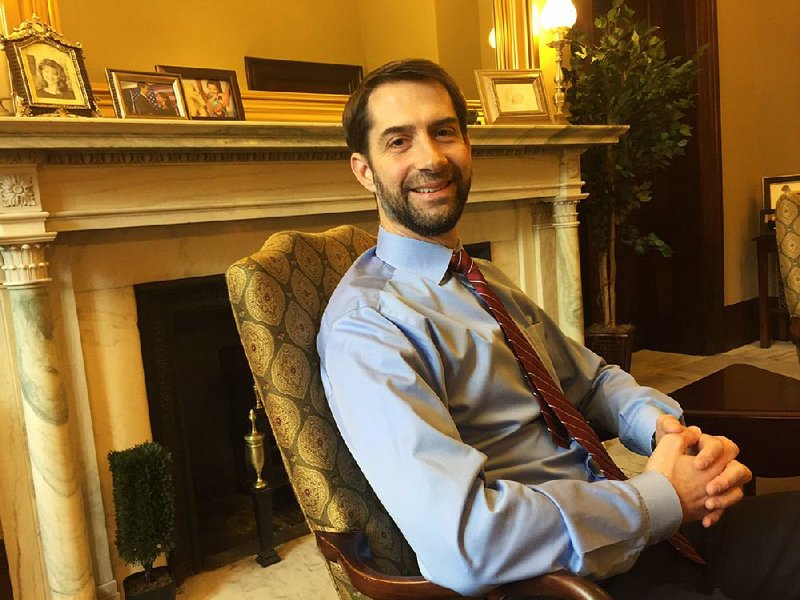 Sen. Tom Cotton stopped shaving while his son was ill in December and plans to keep the beard for a while.

WASHINGTON -- U.S. Sen. Tom Cotton met with President Donald Trump in the Oval Office on Tuesday afternoon to discuss immigration, agreeing to push ahead with legislation that would make significant changes to the current system.

The Republican from Dardanelle and Sen. David Perdue, R-Ga., unveiled a bill last month that would cut legal immigration into the country in half.

The measure has captured the White House's attention, but Trump wants Cotton and Perdue to come up with an even more sweeping overhaul, Cotton said.

"The president likes the legislation in concept, but he wants to find a way to go even bigger to reform our legal immigration system to make sure that we're admitting immigrants who have the preparation needed to contribute to our economy in a meaningful way," Cotton said in an interview shortly after the meeting.

"[Trump] would like Sen. Perdue and I to work on a broader coalition to try to craft a bill that can earn majority votes in the House and the Senate and that he can sign into law, and that's exactly what we will do," Cotton added.

Tuesday's meeting lasted about 45 minutes to an hour, Cotton said.

During last week's speech to a joint session of Congress, Trump called for immigration changes, saying they're necessary to protect American workers.

Decreasing the flow of unskilled labor into the country "will save countless dollars, raise workers' wages and help struggling families -- including immigrant families -- enter the middle class," he added.

"The long-term goal and concept is to move our legal immigration system in the direction of the Canadian or the Australian model, which prioritizes people with high skills, ultra-high skills, the ability to come to a country and contribute right away with a high-paying job, be a taxpayer," Cotton said.

Under the current system, "only one out of 15 immigrants are admitted to the country for anything related to job skills," he added.

Cotton said he's discussed immigration with Trump before, on the telephone and at Trump Tower in New York. This is the first time they've discussed the topic at the White House, he added.

It would also prevent green-card holders and U.S. citizens from permanently bringing their foreign parents, siblings and adult sons and daughters to this country. In addition, it would cap the number of refugees at 50,000 per year.

Under the current system, roughly 1 million immigrants per year legally enter the U.S. The Arkansas senator said his legislation would cut that number nearly in half.

Trump's message on immigration has resonated with many Americans, Cotton said.

"Immigration and trade were the two issues during the campaign that most differentiated President Trump from his opponents," Cotton said, calling them key to his victory.